Comedian Amy Schumer and husband Chris Fischer are celebrating the birth of their first child – a boy.

Their new arrival was announced on the same day the Duke and Duchess of Sussex’s own baby boy was born.

The couple had also announced their pregnancy in October 2018 – by editing their faces onto a photo of Prince Harry and Meghan’s bodies.

Schumer posted a photo of herself, her husband and their baby at the hospital in New York, which appeared to have been taken soon after the birth. 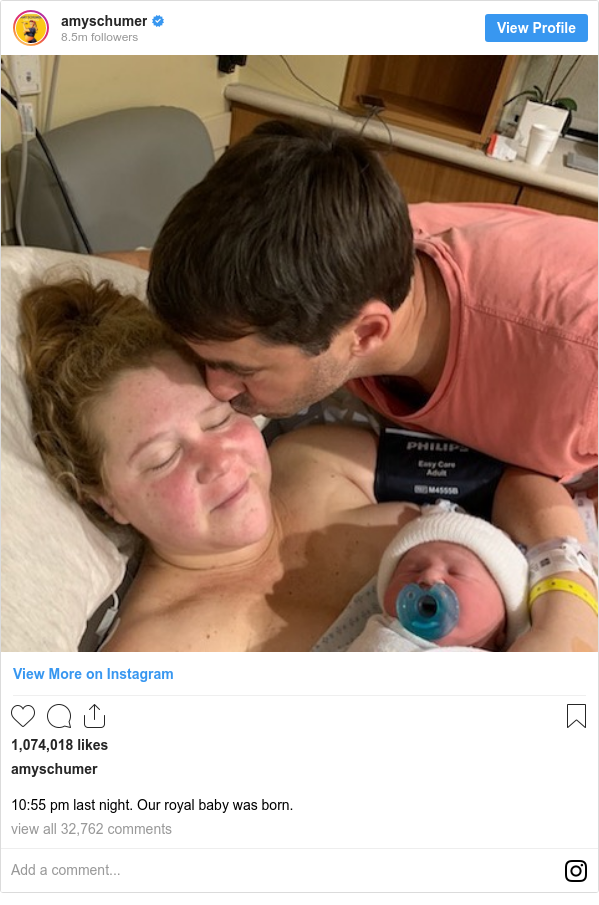 Schumer also combined the news of her pregnancy with a list of more than 20 Democratic candidates that she was endorsing in the US mid-term elections the following month.

In another post on Monday, the comedian said she had stopped off at the Metropolitan Museum in New York to pose for a photo on her way to the hospital.

The museum is the venue for Monday evening’s Met Gala, one of the most highly anticipated events in the fashion calendar.

Guests are only admitted with a personal invitation from Vogue editor Anna Wintour, and must wear a designer look along a specific theme.

The theme this year is “camp”, to coincide with an upcoming exhibition inspired by photographer Susan Sontag’s 1964 essay Notes on Camp, which will explore “irony, humour, parody, pastiche, artifice, theatricality, and exaggeration” in fashion.

Schumer was wearing a pared-down cardigan-and-trainers combo, which she said was her “Met look this year”.