Things just got a lot uglier as the story of Tristan Thompson allegedly cheating on Khloé Kardashian continues to unravel. ICYMI: IG model Sydney Chase recently claimed that she and Thompson had hooked up in a podcast and then proceeded to give a timeline of their alleged relationship in a recent TikTok video. If that wasn’t heartbreaking enough, The Sun has now obtained a video in which Chase can be heard reading the alleged texts between her and Thompson describing intimate details about their rumored affair. At one point, Chase even says that Thompson told her Kardashian was “not his type.” Yep, we’re furious. 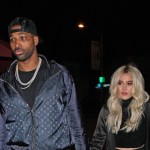 “Apparently Khloé is not his type but I’m his type,” Chase said before she explaining that Thompson’s “type” looked like his ex-girlfriend, Jordan Craig, with whom he shares a 4-year-old son Prince. To make matters worse, Chase went on to share the supposed reason why Thompson is with Kardashian despite the fact that she’s not his “type.” “He wanted the status and be able to keep that status but I looked just like his ex and am his type [like] his baby mama,” Chase shared in the video.

“But he just called me and told me, ‘You’re what I like’ and I’m like, ‘You’re with someone,’” Chase continued. “There’s no way she doesn’t know,” she concluded, referring to the Good American founder. As fans know, Thompson and Kardashian have put up a united front for a while now and have even publicly shared their thoughts on expanding their family sometime soon. This isn’t the first time Thompson has been accused of cheating on the Keeping up with the Kardashian‘s star, which is what makes this story all the more frustrating.

We are sure hoping that this wanting clout isn’t Thompson’s motivation for pursuing a romantic relationship with Khloé but either way, we’re sure these devasting and painful comments aren’t easy for the reality TV star to hear. We’re sending Khloé all the love and we know that she’ll speak out on the situation whenever she’s ready to do so.

Before you go, click here to see all the celebrity couples who have stayed together after cheating scandals.