The big news out of Patek Philippe’s Plans-les-Ouates HQ yesterday might have been the first reference in the new 5811 series, which succeeds the brand’s legendary and now discontinued 5711 design, but that wasn’t the only watchmaking leaving the manufacture.

Three other new pieces – from haute horlogerie to haute joaillerie – demand your attention as well. 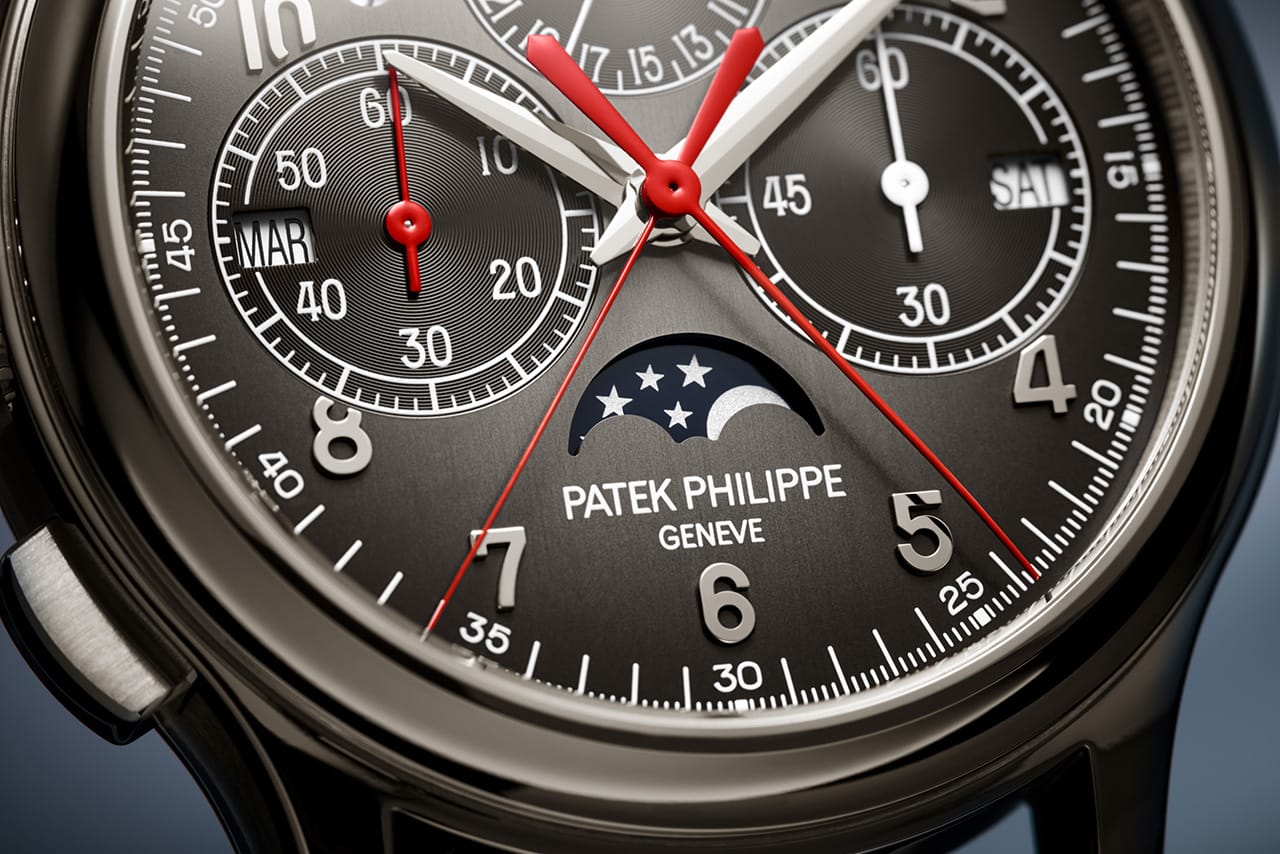 Patek Philippe is renowned for its split seconds chronograph perpetual calendars and here Patek uses the complication as a platform for its first series watch designed with the crown on the left side of the case for left handers.

Inspired by the brand’s Ref. 5732 – which commands nearly $700,000 USD on the resale market – the platinum 5373P sees its pushers, crown and dial “inverted for left-handers” creating an unconventional 9/12/3 sub dial configuration. The watch uses Patek’s Calibre 27-525 PS Q, the thinnest split-seconds chronograph perpetual calendar movement it has ever produced at 7.3mm thick.

The 5732’s traditional gold dial here makes way for a charcoal gray-to-black gradient dial with vertical satin brushed finish with white gold appliqué hour numerals and red chronograph hands giving it a much more contemporary look and, as this is a platinum Patek, it features a diamond set in the case at the 12 o’clock position. A black calfskin strap embossed with a fabric pattern and red contrast stitching secures its platinum folding clasp. Listed as ‘Price on Request’. 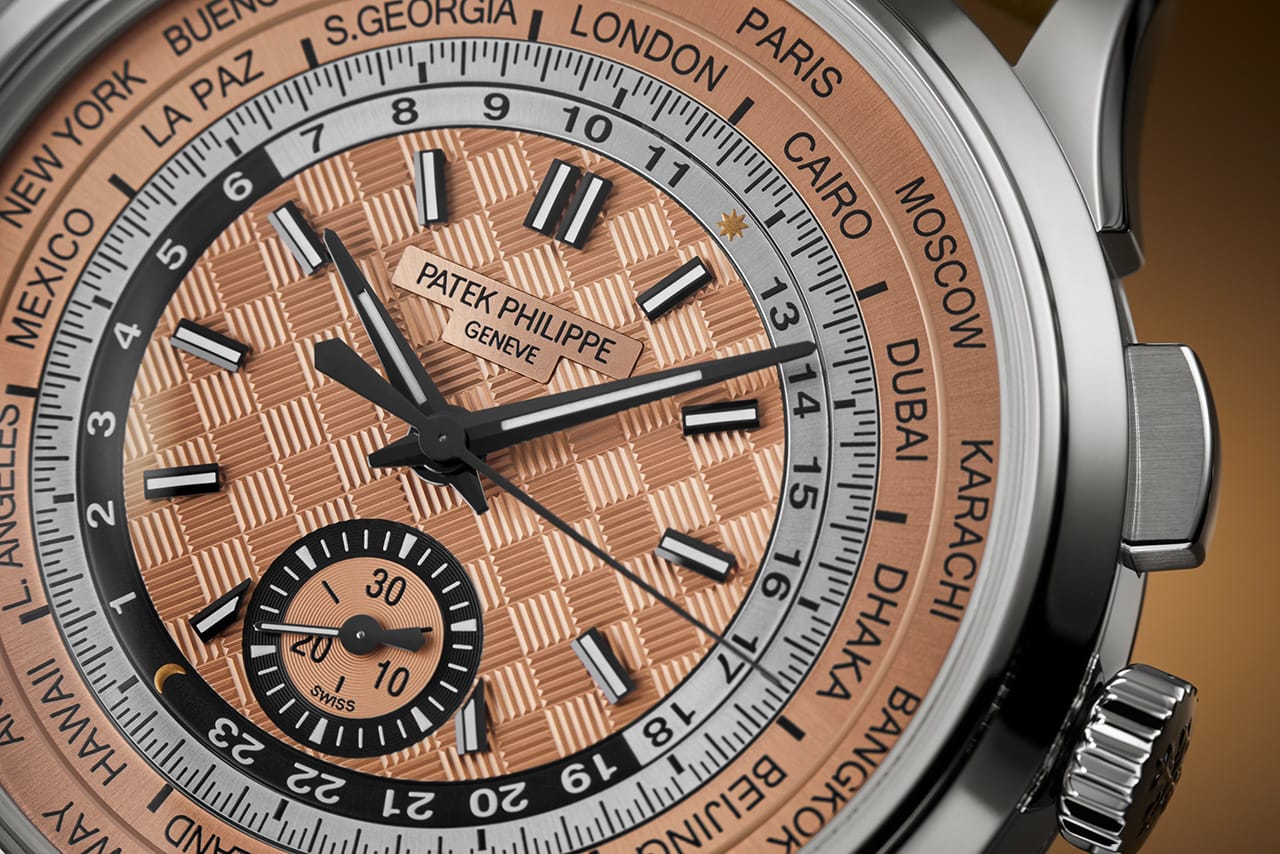 This 41mm polished stainless steel world time flyback chronograph follows the tried and tested Ref. 593x formula, but does so in style with a guilloche rose-gilt dial and city rings contrasting against the black and white 24-hour ring and 30-minute chronograph counter at the six o’clock. The watch is supplied with two calfskin straps in grained taupe and beige with a nubuck finish and steel clasp. Priced £51,430 GBP (approximately $57,900 USD). 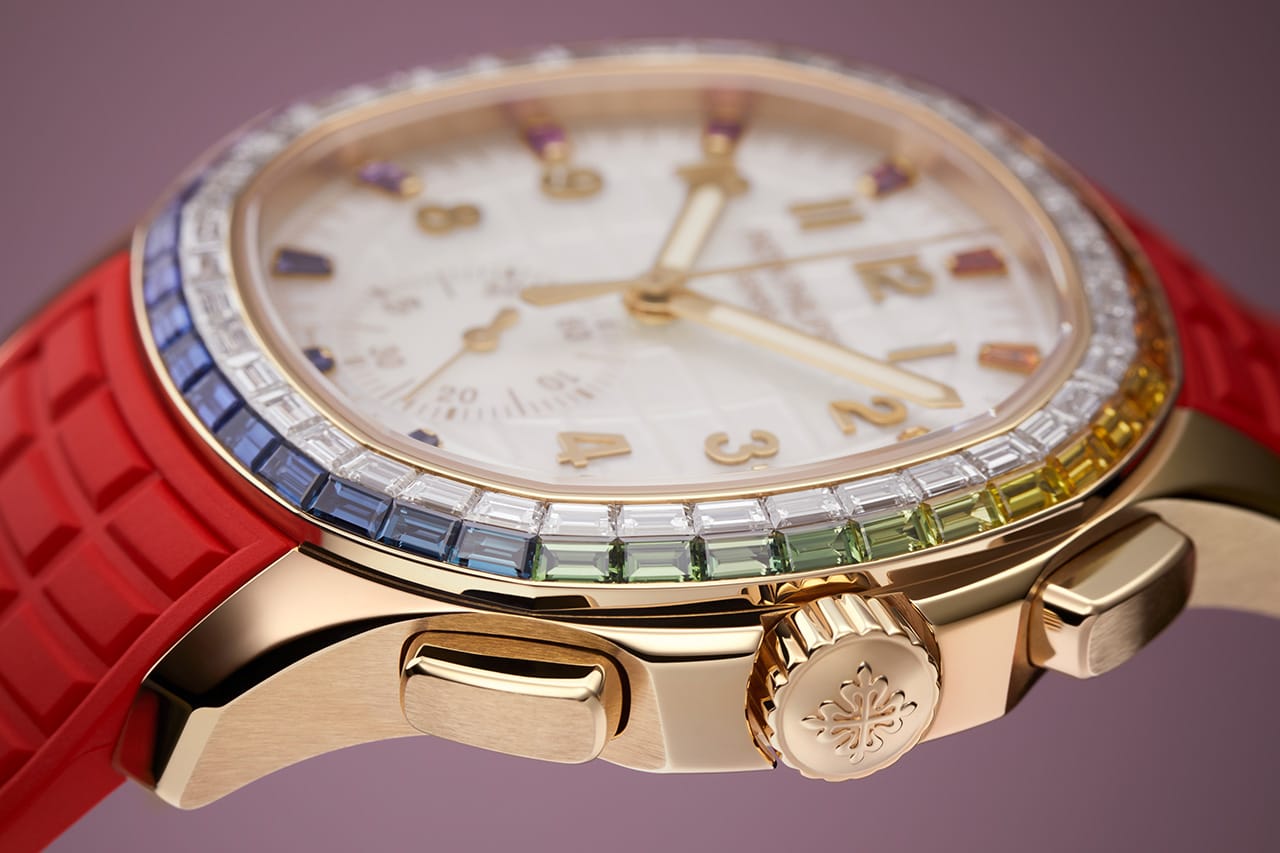 Patek enters the market for rainbow-set watches with the Aquanaut Luce “Rainbow” chronograph, a watch intended for ladies, but at 39.9mm it will no doubt attract the attention of a male audience as well. As such, the watch becomes the brand’s first automatic chronograph for ladies thanks to its CH 28-520 flyback chronograph calibre.

The ‘Joaillerie’ version features an engraved mother-of-pearl dial and sees its bezel invisibly set with a ring of 40 baguette-cut diamonds inside a ring 40 multi-colored baguette-cut sapphires. The rainbow coloring is reflected in the 12 baguette-cut sapphires that form the watch’s hour markers. The fold over clasp is also diamond-set, making for a total of 5,03ct of gemstones on the watch and the watch is supplied with red, beige and white straps. Priced £171,420 GBP (approximately $193,000 USD).