Home » They Are Their Own Monuments

PHILADELPHIA — In a section of North Philadelphia, near an underpass and up a soaring stoop painted sky blue, Ms. Nandi’s home is decorated with pictures of civil rights heroes and political icons — Malcolm X, Queen Nefertiti, Lenin. Here, for some 20 years, Denise Muhammad, known by everyone as Ms. Nandi, and her husband, Khalid, ran an afternoon penny candy store for the neighborhood’s children out of their front living room, but it did much more than sell Tootsie Rolls.

If the children couldn’t count their change, the couple taught them. If they couldn’t read a quotation from Marcus Garvey on the wall, they helped them learn to read. “Ask any child in the neighborhood where Ms Nandi’s house is,” she said on a recent afternoon. “They’ll know.”

Ms. Nandi is a pillar of the community many residents call Fairhill-Hartranft, and one of the inspirations behind a new exhibition there called “Staying Power.” The show, which opened May 1 across several green spaces, features a series of homegrown monuments by artists to the residents who have helped to lift citizens in these communities, where the life expectancy is low, incarceration levels are high, and gentrification is now displacing people.

Not granite or bronze, these new monuments by Deborah Willis, Sadie Barnette, Ebony Patterson, Courtney Bowles and Mark Strandquist, and Black Quantum Futurism, consist of outdoor sculptures and photography, storefront activations and performances. When I visited before the opening, banners were being unfurled, lights strung up, and the parks swept of debris. 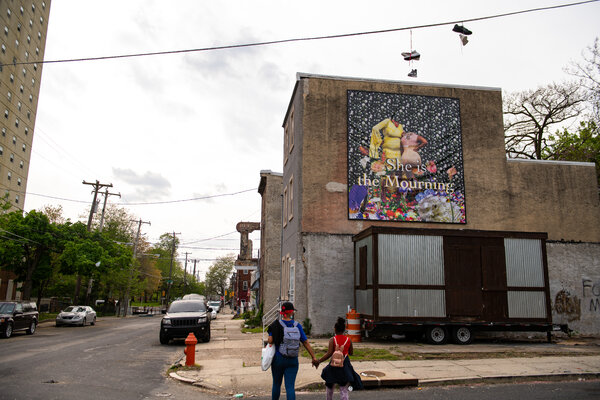 “This is a place to understand how residents over many generations sustained staying power despite systemic forces undermining them,” says Paul Farber, director of Monument Lab, a Philadelphia-based public art and research studio dedicated to examining how history is told in the public landscape.

Monument Lab has conceived and organized the exhibition alongside residents and the Village of Arts and Humanities — an arts nonprofit that runs cultural programs and stewards several parks in the area.

The story of Ms. Nandi’s candy store has informed at least three of the installations in “Staying Power.” Barnette has created a fantastical living room in a storefront along Germantown Avenue, the neighborhood’s commercial corridor. It is a homage to “the institution of family living rooms,” as a place of solace and healing during times of crisis, Barnette said. Patterson has created a series of banners featuring headless women against richly patterned backgrounds, honoring those who nurtured community but who nonetheless suffered violence and trauma.

Willis, who grew up some 25 blocks from Fairhill-Hartranft, photographed female entrepreneurs and their homes, including a baker, Tamyra Tucker, an event organizer, Aisha Chambliss — and Ms. Nandi.

When the artists Bowles and Strandquist began considering the idea of staying power, they took a different approach, asking, “who is missing?” The pair collaborated with five formerly incarcerated women to create a sculpture that celebrates their ongoing crusade to end life sentences in Pennsylvania. The women’s images appear in commanding portraits, displayed around a crownlike structure, while 200 lights hang above them — a memorial to the women still serving life sentences, 54 of whom are from Philadelphia.

If Bowles and Strandquist’s work represents dozens of Philadelphia women, Black Quantum Futurism, the Afro-futurist collective created by the social practice artists Rasheedah Phillips and Camae Ayewa, is hoping their monument will capture voices from the neighborhood and beyond. Taking the form of a 7-foot grandmother clock, the towering form houses an oral history booth where residents can record their stories and share their desires for the future. It is, in effect, a monument that listens.

“Staying Power” is giving a platform to local voices in other ways: It includes a whole gamut of programs, performances and research initiatives — including one led by Ms. Nandi, who as a paid curatorial fellow will be interviewing families about their experiences of home-schooling kids during the pandemic.

It is not unusual for community members to have this level of involvement in a project organized by the Village, which has its closest parallels in the nonprofits Project Row Houses in Houston, and the Heidelberg Project in Detroit. For Farber, of Monument Lab, that holistic approach to community development made the Village the ideal partner to think about “what stories, and therefore which people, get a say in the evolution of a city.”

A five-minute walk from Ms. Nandi’s home, a patchwork of green spaces with undulating, mosaic-encrusted walls and vivid murals across the walls — Yoruba, Christian, Islamic, Chinese — leads to the Village. It was here, more than 50 years ago that Arthur Hall, a visionary teacher of West African dance and music, planted a seed with the Ile Ife Black Humanitarian Center, which became a hub for the Black Arts Movement in the late ’60s and ’70s.

Back then, the green spaces surrounding the building were vacant lots where houses had burned down. “This was all dust, rubble, no trees,” said the Village’s executive director, Aviva Kapust, pointing to the park that abuts the organization’s main building. In 1986, Hall invited the Chinese artist Lily Yeh to the neighborhood to work with his friend, the local mason JoJo Williams, to transform the vacant lots. She began by engaging children in the area to discuss what was missing. “They said trees,” Kapust recounted, “so she drew a big circle in the dirt and they built the Tree of Life sculpture.”

Real trees followed, as did homegrown monuments — murals and sculptures made from pieces of furniture encased in concrete and decorated with mosaic patterns. When Hall left Ile Ife in 1988, he entrusted it to Yeh, who turned it into the Village of Arts and Humanities and expanded its mission to include the development of green spaces in the footprint of former homes.

Today, the legacy of Hall and what grew out of it is still a source of strength, pride, and identity in Philadelphia. A metal plaque bearing his name and story is planted in the sidewalk next to the Village. “Every time I read it, I smile,” said Ivy Johnson, a home health aide and prison reform advocate — and one of the women who appears in (and collaborated on) Bowles and Strandquist’s monument.

Now Johnson’s image will also appear in one of the Village’s parks and include a recording of her voice, along with poetry written by incarcerated women. Johnson was imprisoned for 18 years, and writing poetry was her outlet in a particularly dark period. Making art from her experience is a form of healing, she said.

This is perhaps what undergirds “Staying Power”: the belief that giving people access to stories in the public landscape, to the legacies of those who have forged a path toward self-determination, can make a material difference in residents’ lives. As the exhibition’s co-curator Arielle Julia Brown put it, a key part of what it means to have staying power is having what she calls “choiceful histories” at hand.

With this exhibition, and its work at large, the Village hopes to make concrete change. A series of free newspapers published in tandem with the show will spotlight local advocacy efforts, like the fight to reopen a recreation center that was closed in the 1980s. The organization funds community-led research into alternatives to policing and runs expungement clinics to help people purge their criminal records. The exhibition is not about “profiting from people’s stories,” Kapust said, but “presenting a series of investments in people, in actual revitalization efforts.”

For Rasheedah Phillips, who works as a full-time housing equity lawyer while moonlighting as one-half of Black Quantum Futurism, art and advocacy work can converge. Phillips has been working alongside the People’s Paper Coop to get laws passed that would prevent criminal records being used in employment decisions, and eviction records being used by landlords to deny people housing.

Through their monument, Black Quantum Futurism hopes to give neighborhood visitors the opportunity to use their voices to share memories and dreams — thereby honoring African diasporic oral traditions. Submissions to the oral history booth will ultimately live in an online archive.

In a city where murals have been destroyed by luxury housing, the Village’s have remained. “Over all the years that they have been there,” Ms. Nandi said, “they have never been graffitied. They have not been torn up. They have not been spray-painted. Children helped to put them together. So they can say this is ours, literally. I had my hands in it. I painted, I cleaned, I helped build the trees.”