Too many experimental playwrights disappear into the ether, their reputation sustained by academic essays and word of mouth. Revivals? Let’s just say that Arthur Miller largely trumps Richard Foreman when the time comes to set a season.

Naturally, the situation is even worse for Black experimental artists, especially if they happen to be women. Thankfully, streaming is now making festivals and tributes more accessible to wide audiences.

Case in point: “The Work of Adrienne Kennedy: Inspiration & Influence,” organized by the McCarter Theater Center in Princeton, N.J., and the Round House Theater in Bethesda, Md. 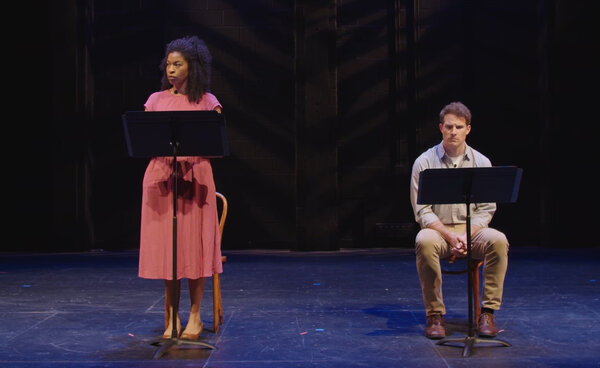 Eschewing the playwright’s most frequently produced work, “Funnyhouse of a Negro,” the fest has just kicked off with “He Brought Her Heart Back in a Box,” to be followed by “Sleep Deprivation Chamber” (Saturday), “Ohio State Murders” (Dec. 5) and “Etta and Ella on the Upper West Side” (Dec. 12). Add panel discussions, and our collective synapses should be firing for a while. (Through Feb. 28; roundhousetheatre.org.)

Hot off the word processor

Let’s boldly assume — or maybe indulge in some wishful thinking — that when theaters physically reopen, they will include fresh material and not rely on familiar revivals to entice audiences back. Companies could shop around for potential productions at these festivals.

The National Alliance for Musical Theater has teamed up with Broadway on Demand for its 32nd annual Festival of New Musicals, in which eight shows get 45 minutes each to make their case. (Nov. 19-29; namt.org.) For its inaugural edition, the New Works Virtual Festival will stagger readings of 20 new scripts on Dec. 5-25 (they will remain online for a year). The playwrights will be spoiled with ace casts: Santino Fontana, Tracie Thoms and Eva Noblezada lead “Happy Couples” (Dec. 5), for example, while Marsha Mason and Tonya Pinkins appear in “So When Are You Leaving?” (Dec. 8). (Facebook.com/newworksvirtualfestival or go to the New Works Virtual Festival channel on YouTube.)

Me, myself and mom

In “Dragon Mama,” the writer-performer Sara Porkalob vividly brings to life her mother, who left Washington state to work and explore her queerness in Alaska. The play is the middle part of the Dragon Cycle, in which Porkalob explores her Filipino-American family’s history, and it certainly whets the appetite. (Through Dec. 10; americanrepertorytheater.org.)

Motherhood also plays a central role in Charlayne Woodard’s 2009 solo show “The Night Watcher,” which is now available in a new Primary Stages stream. Woodard, one of the most effortlessly charismatic performers currently plying their trade, looks at her subject from a variety of angles, with race also playing a part. (Through Sunday; primarystages.org.)

A busy year for Philip Ridley

Back in April, the Tramp company was scheduled to do a new Philip Ridley play, “The Beast of Blue Yonder.” After the show was shut down by Covid, the actors performed, recorded and posted online a series of new Ridley monologues, ranging from just above two minutes to just under an hour. (Ongoing; wearetramp.com.)

Now, Tramp is back in Ridleyland with the premiere of “The Poltergeist,” a monologue about a former wunderkind artist who did not quite meet expectations. The word “controversial” often pops up in articles about the playwright so don’t be surprised if the show, livestreaming from London’s Southwark Playhouse, holds dark surprises for its protagonist. (Nov. 20-21; southwarkplayhouse.co.uk.)

Coming our way this month are two recent, or recent-ish, thought-provoking plays that don’t conform to expectations. Up in Connecticut, TheaterWorks Hartford is reviving “The Who and the What,” Ayad Akhtar’s follow-up to his Pulitzer Prize-winning “Disgraced” and a probe of the challenges Muslim women face. (Through Nov. 28; twhartford.org.)

Philadelphia’s Wilma Theater is putting on Will Arbery’s Pulitzer Prize-winning “Heroes of the Fourth Turning,” in which conservative friends chat away in a Wyoming backyard. The show was staged and recorded in a “secluded Poconos home,” which sounds just like the setting of a 1980s slasher movie. (Dec. 1-13; wilmatheater.org.)

Stars in our eyes

Would the popular Constance Wu even have time to do Chekhov in normal times? But here she is, playing the siren Yelena in Neil LaBute’s adaptation of “Uncle Vanya.” Pining for Yelena will be Alan Cumming’s Vanya and Anson Mount’s Astrov, with Samira Wiley as Sonya and Ellen Burstyn as Maria. (Thursday through Nov. 23; broadwaysbestshows.com.)

Another vintage play getting a deluxe cast is Tennessee Williams’s “The Night of the Iguana” with Phylicia Rashad, Dylan McDermott, Roberta Maxwell and the national treasure known as Austin Pendleton. (Dec. 2-6, lafemmetheatreproductions.org.)

From the outside, looking in

Punching way above its weight, tiny Ars Nova has helped hatch projects as diverse as the musicals “Natasha, Pierre & the Great Comet of 1812” and “KPOP,” the variety hour “Showgasm,” and the runaway hits “Underground Railroad Game” and “Small Mouth Sounds.” Now the company has come up with a particularly ambitious online project: “The Ars Nova Forever Telethon,” a 24-hour-long livestream featuring over 100 participants. It might well be one of the virtual events you’ll brag about seeing in 10 years. (Dec. 4 at 6 p.m.-Dec. 5 at 6 p.m.; on-demand through Dec. 8; arsnovanyc.com.)

Another influential semi-outsider is the late Elizabeth Swados, whose music is celebrated with “The Liz Swados Project,” a companion event to the tribute album of the same name (Ghostlight Records). Expect selections from “Runaways,” “Alice in Wonderland” and “Nightclub Cantata” by the likes of Sophia Anne Caruso, Heather Christian, Damon Daunno, Amber Gray, Ali Stroker and Taylor Mac. (Nov. 24-Dec. 8; publictheater.org.)