Warning: This post contains spoilers from the Sunday, March 22, episode of The Walking Dead.

During her final episode, Virgil (Kevin Carroll) locks Michonne in a cell, and she begins hallucinating how different her life could have been if she didn’t save Andrea (Laurie Holden). The journey is a dark one that includes many familiar faces — including Rick (Andrew Lincoln), Glenn (Steven Yeun) and Abraham (Michael Cudlitz) and Maggie (Lauren Cohan).

In fact, in the nightmare, she joins forces with Negan (Jeffrey Dean Morgan). In the scene that originally featured Negan murdering Glenn and Abraham, Michonne takes Lucille and kills herself. Later in the nightmare, she’s then shot with an arrow by Daryl (Norman Reedus) and killed by Rick’s gunshot.

Ultimately, she escaped the cell and searched an abandoned boat for weapons. However, she found something even more helpful: Rick’s boots and a cellphone that had Rick’s name carved into it, as well as a drawing of her and Carl (Chandler Riggs). With that, she tells Judith — via her walkie talkie — that there’s a chance “the brave man” is alive. Judith tells her that she must go and try to find him because maybe he needs her more than they do.

With that, she leaves. She finds a couple struggling and begging for her help because “they won’t wait for us.” When she asks who “they” are, the couple points ahead, and a group of what appears to be military is shown. She quickly flashes back to Rick and Carl deciding to help her in season 3 — and agrees to help them. 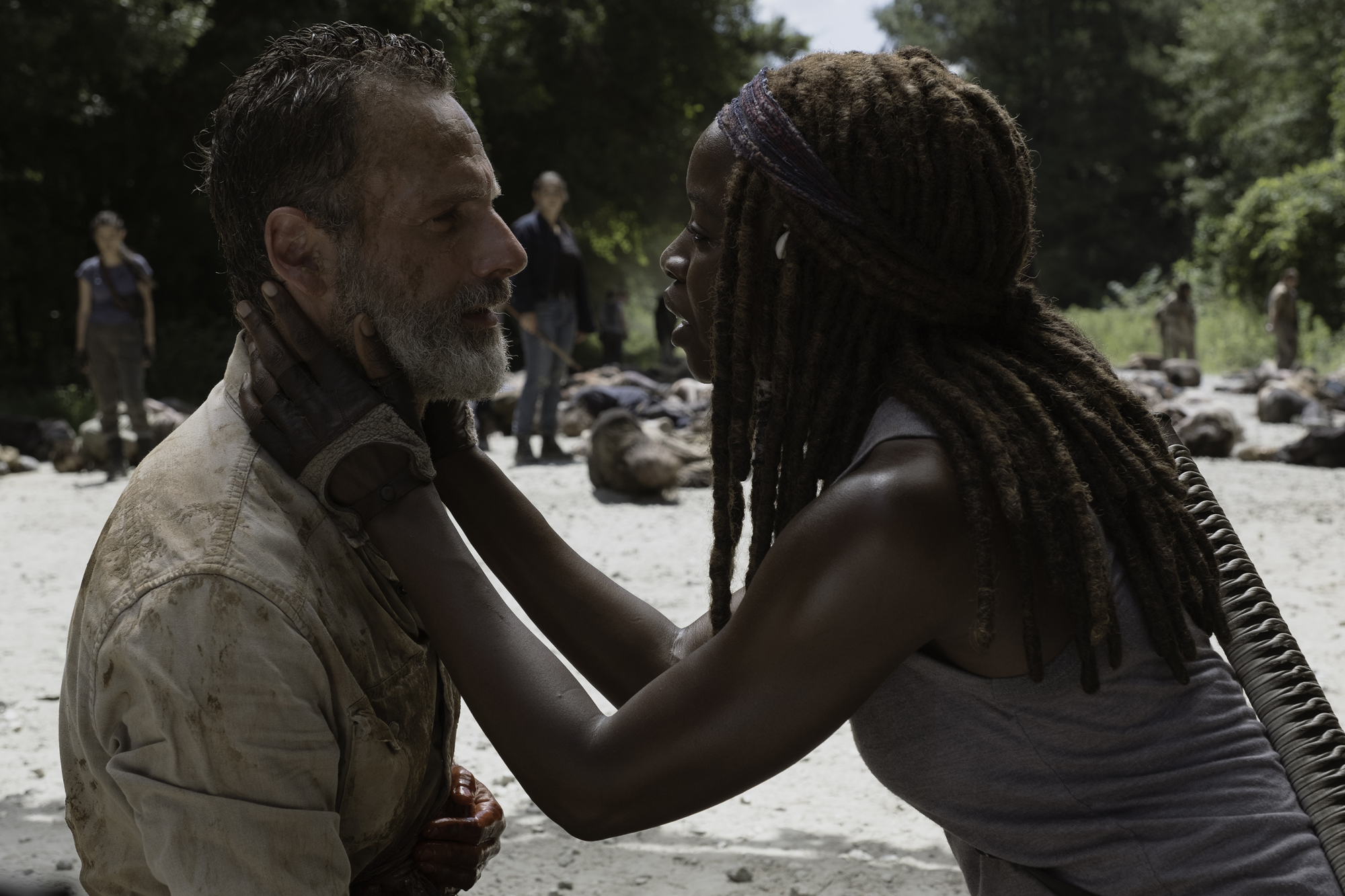 Gurira, 42, revealed she was leaving the show at San Diego Comic-Con in July 2019.

“I can confirm that this is the last season. I will be leaving. I would just like to say that this has been one of the purest joys of my life, to play this role,” the actress said alongside her cast and crew during the show’s panel. “I am very, very thankful for the experience I’ve had in ways I can’t even express right now.”

Michonne’s exit comes a little over a year after Rick Grimes. While she and the rest of the group believe he was killed in a fire, he actually survived the massive explosion. However, Jadis (Pollyanna McIntosh) found him barely alive on the banks of the river, and they were both airlifted away on a mystery chopper.

Rick’s story will continue in multiple Walking Dead movies. “It’s not the beginning of the end, it’s the end of the beginning,” the actor, 46, said on Talking Dead in November 2018, after his last episode. “And I like the idea that we get to tell a bigger story, maybe with a sort of wider vista. And I’ve always been interested in what’s going on out there, you know, whether or not there is contact with the wider world. I want to know the meta of it all … Maybe it’s the start of a bigger story.”

It’s safe to assume, with Michonne surviving her final episode and leaving to find Rick, she could appear in the movies in the future.

The Walking Dead airs on AMC Sundays at 9 p.m. ET.