Before “Stranger Things” was a hit Netflix original, it was just another TV pitch that no network wanted to touch.

Many of the elements that made “Stranger Things” a cultural phenomenon when it premiered in 2016 — like its 1980s nostalgia and dark coming-of-age story — worked against the creators when they were pitching the show to companies in Hollywood.

“A lot of the concerns were based on the fact that this is a show about kids, but it’s not a kids’ show,” Matt Duffer, who created the show with his brother, Ross, said in a book about the making of the series called “Stranger Things: Worlds Turned Upside Down.”

The idea for “Stranger Things” was rejected 15 to 20 times, according to the book.

But there were many things that the original pitch for the TV show absolutely nailed. The look book that the Duffers used alongside the pilot script to shop the series around Hollywood shows how the creators hooked Netflix executives on a feeling of childhood and innocence.

A pitch that succinctly captures the tone of a series through movie, TV, or other visual references is key to selling Netflix on a project, Christopher Mack, director of talent investment and development at Netflix, said during a 2021 workshop for TV creators.

“The Duffers were great at capturing a feeling,” Matt Thunell, the content-development exec at Netflix who discovered “Stranger Things,” said in the book. “You really feel something on the page. You feel like you did when you were a child. You feel what it was like to grow up, to be innocent, to have your whole life in front of you.”

Netflix ordered the series in April 2015, shortly after hearing the pitch.

The 23-page look book instantly set the show's authentically '80s vibe by mimicking the look and feel of the classic Signet paperback books that were popular during the period. 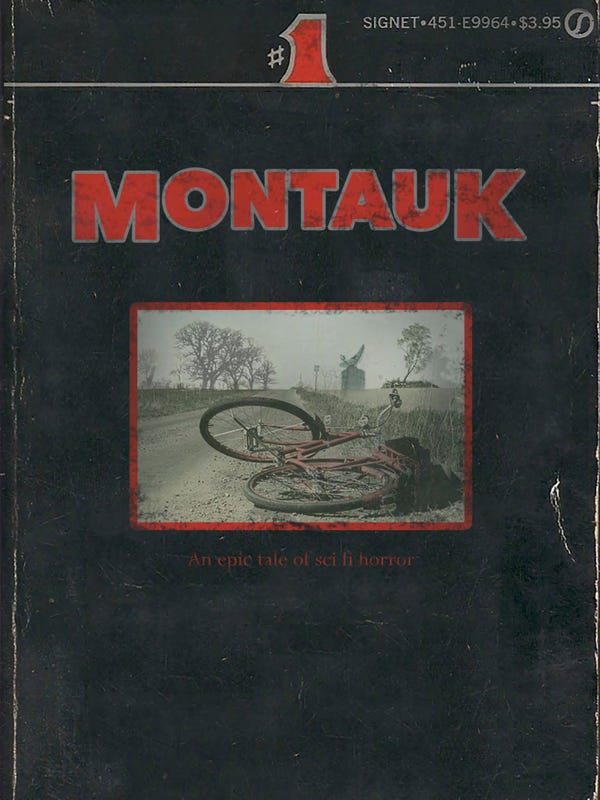 It also included images from 1980s films, like “E.T.,” “Altered States,” and “Poltergeist,” to signal the spirit the Duffers hoped to capture with the series.

“It wasn’t trying to be any of the things that inspired it,” Dan Cohen, an executive at the production company behind “Stranger Things,” 21 Laps Entertainment, said in the behind-the-scenes book. “It just was great and felt like you were transported to the 1980s.”

The ’80s tone was both a tribute to the Duffers’ inspirations and a plot device. The kids needed to be independent in order to go on adventures without their parents worrying.

The series was originally written and pitched with the title "Montauk," an homage to Steven Spielberg's "Jaws." 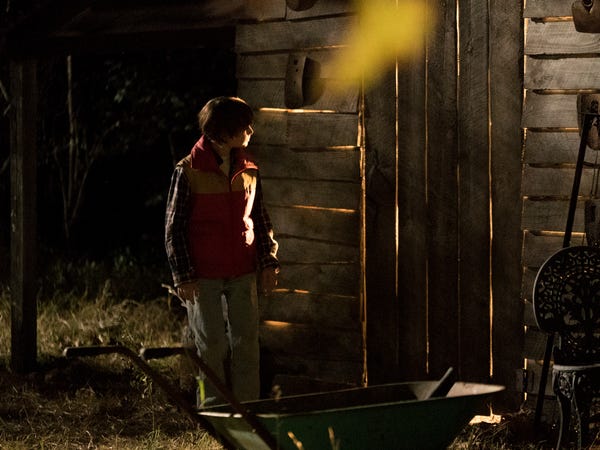 The town on the northern end of Long Island was the inspiration for Spielberg’s “Jaws.”

Its US Air Force base, known as Camp Hero, was also at the center of conspiracy theories involving government surveillance and mind-control experiments, which made it the perfect backdrop for an eerie mystery like “Stranger Things.”

The location and title of the show were changed during location scouting, when the Duffers decided to set it in a suburban town similar to where they grew up in North Carolina.

"Stranger Things" wasn't a period piece. The Duffers wanted the show to feel "period but timeless." 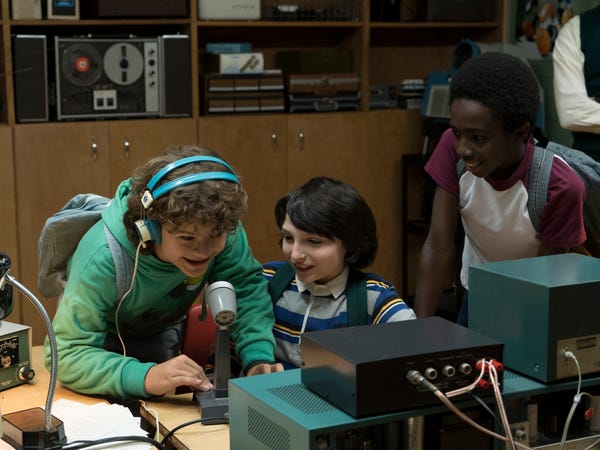 The look book explained how nostalgic elements from the 1980s — such as “wood paneled station wagons, analog technology, Empire Strikes Back in theaters, Blondie on the radio, etc.” — would set the tone of the show but not overpower it.

“While this will add a fun nostalgia factor to the show, these details must never overwhelm the story or characters,” the look book said.

It added: “The soundtrack should similarly feel period but timeless. Classic songs will only come from sources such as radios and TVs; most of the music will be original, which we imagine as a cinematic, eerie, modern synth sound, inspired by the classic early John Carpenter scores like The Thing and The Fog.”

The characters were fully formed and perfect for a coming-of-age saga. 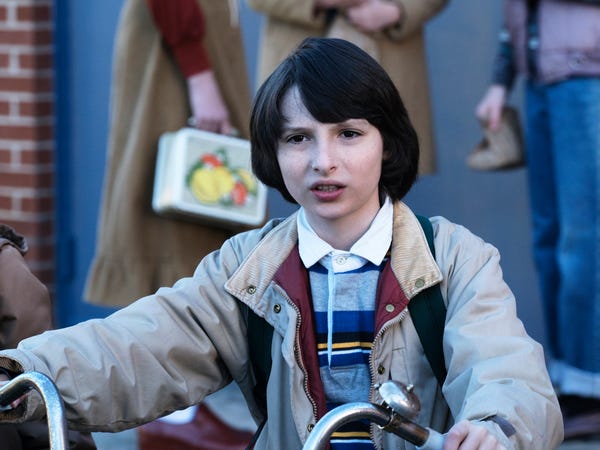 The description of Mike Wheeler, one of “the kids,” as he’s labeled in the look book, jumped off the page:

“MIKE WHEELER is twelve. He is a cute kid, but a birthmark on his left cheek leads to much bullying and near-crippling insecurity. He has never had a first kiss, much less a girlfriend. He escapes his insecurities through reading fantasy novels, spending time with his three best friends (Lucas, Dustin, and Will) and retreating into his own vivid imagination. The Dungeon Master of his Dungeons and Dragons group, he writes sprawling adventures with fantastical monsters. When he finds himself on a real adventure, facing real monsters, he will discover a courage he didn’t know he had. By the end, he will even kiss a girl.”

The look book included descriptions like these for every character in the show: the rest the of the kids, the teenagers, the adults, and “the outsider,” Eleven, who is described as the “E.T.” to Mike’s Elliot, in reference to the Spielberg film.

Thunell, the Netflix development exec, was looking for shows that would appeal to people in their teens and 20s after “House of Cards” and “Orange Is the New Black.” He was drawn to the show’s “fresh coming-of-age story” and “sincere themes,” according to the behind-the-scenes book.

In the background of the coming-of-age tale were supernatural themes that could appeal to genre fans but were rooted in reality. 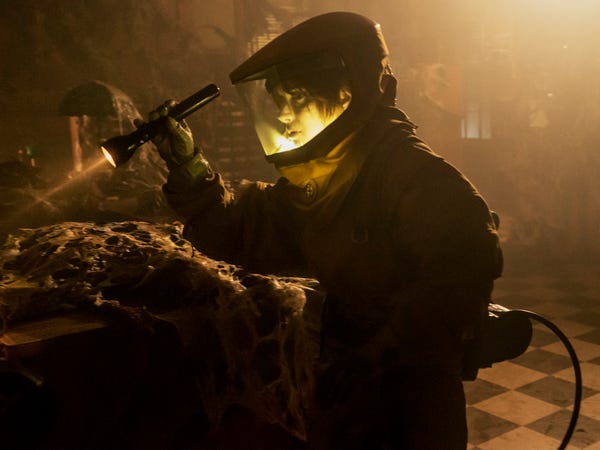 The horror in the show would be “supernatural — but rooted in science,” the look book said. “We want to use the mathematics of theoretical physics to ground our horror in reality.”

As with other young-adult series, the show would also use otherworldly elements as metaphors for real-life struggles.

“The supernatural terrors unleashed on our town will in certain ways personify the evil that exists beneath the perfect facade of this small town,” the look book said. “Abuse, divorce, violence, cruelty, substance abuse, depression, death … our characters will struggle with the darkness of the human condition.”

The Duffers had a clear vision and outline for how the series would play out — with "a definitive beginning, middle, and end." 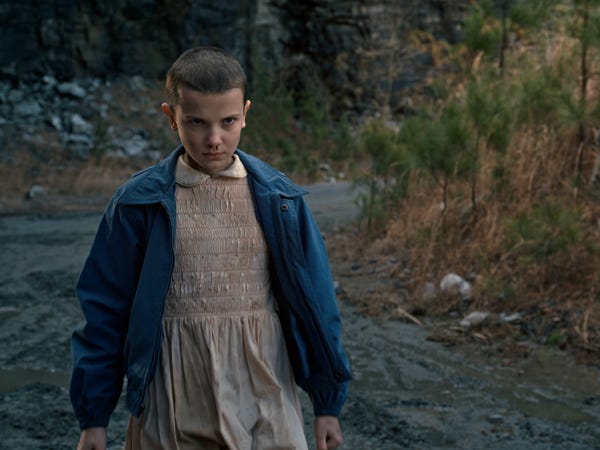 Trained in film school, the Duffers planned to write the first season of the show as a feature film with three distinct acts.

The first three episodes would explore Will’s disappearance and its aftermath. The next three would delve into the supernatural as the town became spookier and the characters were drawn into its mysteries. The final two would depict the characters coming together to save Will and the town.

“There will a definitive beginning, middle, and end,” the look book said. “There will be no loose ends after the finale.”

The Duffers hoped that the limited series would allow it to attract movie stars like Ewan McGregor for the role of Chief Jim Hopper and Naomi Watts as Joyce Byers. David Harbour and Winona Ryder were ultimately cast in those roles.

Still, the pitch left the door open to build a franchise from the series. 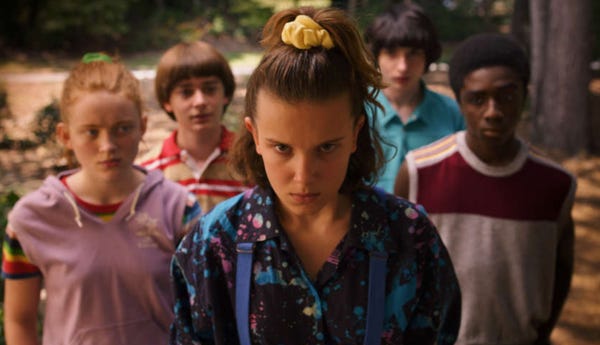 The TV pitch proposed that subsequent seasons of the show could catch up with the characters 10 years later, in the summer of 1990, with a new ensemble cast and era:

“Our kids will now be young adults with new lives, new problems; many of them will have moved out of Montauk, spread out across the country for school and work. But the re-emergence of horror in Montauk will bring them back to their hometown, where they will have no choice but to join forces again.”

Of course, fans of the show became so drawn to the characters, cast, and ’80s feel that the Duffers chose not to force the kids to grow up too fast.