Home » The Conductor Who Whipped American Orchestras Into Shape

“For those who grew to musical maturity with the concert life of the United States in the 1930s and 1940s, his name may still have an aura,” Halina Rodzinski wrote in her memoirs, almost two decades after the death of her spouse, the Polish conductor Artur Rodzinski.

“For those who are younger,” she went on to lament, “my husband is a dry reference in a musical encyclopedia or a name on a record cover in the cut-rate rack of a discount store.”

That was in 1976. And the decades since have not been kind to Rodzinski, leaving him remembered, if at all, for embodying “all that a real maestro was supposed to be,” a critic once wrote: “preening, arbitrary, dictatorial, unpredictable, driven by ambition.”

Possessing an “enormous vocabulary of Polish profanity” that he unloaded on musicians, as Time magazine reported, Rodzinski was also rumored to conduct with a revolver in his pocket. True, Halina confirmed in her book — and it was loaded. 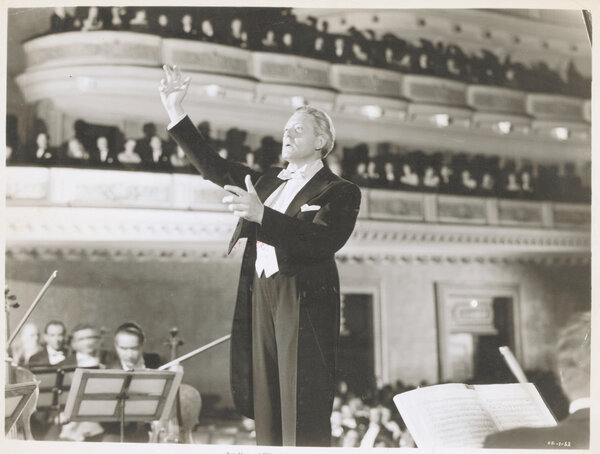 But there was a time when Rodzinski was among the most lauded conductors in the land. He may have been “no poet of the baton,” as the critic Virgil Thomson put it in October 1943, when Rodzinski became music director of the New York Philharmonic. But he was “a first-class orchestral craftsman” and a “master trainer,” Thomson wrote later that season.

Arguably no man had more of a hand in turning American orchestras into the technical marvels they became in the mid-20th century — whether through those he led himself, or through the example he set. He jolted up the standards of some of the great ensembles of the radio age: the Philadelphia Orchestra (as an assistant from 1925 to ’29), the Los Angeles Philharmonic (as music director from 1929 to ’33), the Cleveland Orchestra (1933 to ’43), the NBC Symphony (which he created in 1937), the New York Philharmonic-Symphony, as it was then known (1943 to ’47) and the Chicago Symphony Orchestra, for a single, tempestuous season after that.

Flashier conductors would take those bands further: Leopold Stokowski, Rodzinski’s boss and booster, in Philadelphia; Otto Klemperer in Los Angeles; Arturo Toscanini, Rodzinski’s mentor, with the NBC; George Szell in Cleveland; Rafael Kubelik in Chicago. Their achievements were built on Rodzinski’s foundation, but their fame and commercial success far eclipsed his.

Perhaps Rodzinski’s recordings might change our sense of him. With a rush of recent archival finds, for the first time since the LP era there is plenty to go on. Pristine Classical released a series of superb remasterings of Rodzinski’s studio work with the NBC, Cleveland and Chicago orchestras, as well as a few broadcast tapings from his New York period.

Weightier still is a 16-disc box from Sony, which for the most part recovers 78s made with the New York Philharmonic from 1944 to ’46, filling a hole in the orchestra’s discography and offering a companion to Sony’s box, issued two years ago, of the Philharmonic recordings of John Barbirolli, Rodzinski’s widely derided predecessor.

Compendiums such as these can bolster reputations, as long-silent work reaches fresh ears, or confirm legends born long ago. Sometimes, though, these box sets simply confirm the verdicts of history. And that, alas, is the case with Rodzinski.

Here was a conductor capable of extraordinary feats of clarity and balancing, able to bring the lushest Romanticism to heel, whether in a sparkling Rachmaninoff Second Symphony, or in brisk, enthralling scenes from Wagner’s operas, including parts of “Die Walküre” with the soprano Helen Traubel.

Perhaps surprisingly for such a turbulent character, objectivity was Rodzinski’s interpretive aim. He told Time for a cover story, just before his firing from the New York Philharmonic, that he hoped that “the music goes from the orchestra to the audience without going through myself.” (The very different Stokowski, he said with contempt, “plays music sexually.”)

But if that literalism helped Rodzinski to train his orchestras in pinpoint precision, and brought out the best in intractable works like Sibelius’s Fourth, it could also bore — lacking the tension and vehemence of his idol and model, Toscanini.

The New York Times critic Olin Downes admired Rodzinski’s technique, but he wrote in 1943 that he feared “a reticence approaching overrefinement.” Even Thomson — whose acclaim for Rodzinski surely had nothing to do with the conductor inviting Thomson, who was also a composer, to lead the Philharmonic in his “Symphony on a Hymn Tune” in 1945 — had to admit that guest conductors like Charles Munch made more of the orchestra Rodzinski had built.

Rodzinski was born on New Year’s Day 1892, in Split, and grew up in present-day Lviv, a city long fought over that was part of the Hapsburg monarchy and, later, Poland. While studying law in Vienna, he trained at the Academy of Music and, after suffering shrapnel wounds on the Eastern front in World War I, found a job as a cabaret pianist back in Lviv — relief from days spent inspecting meat shops. He made his debut leading Verdi’s “Ernani,” then moved to Warsaw. Stokowski heard him conduct Wagner’s “Die Meistersinger von Nürnberg” there, and offered to take him to Philadelphia.

Filling in for Stokowski at Carnegie Hall in 1926, Rodzinski was already able to hold an orchestra “firmly in his grip,” Downes noted. Los Angeles and Cleveland followed — the latter a place where Rodzinski could add operas to the symphonic repertoire, not least the American premiere of Shostakovich’s “Lady Macbeth of Mtsensk” in 1935, a coup he scored against Stokowski’s Philadelphia.

When Toscanini resigned from the New York Philharmonic in 1936, Rodzinski was asked to conduct eight weeks of the following season, and was widely seen as a plausible heir to the maestro’s throne. He became Toscanini’s favored candidate after the Italian conductor heard him at the Salzburg Festival.

But the Philharmonic took a gamble on the less experienced Barbirolli that December, before Rodzinski had a chance to prove himself, which he did with an “Elektra” of “historic intensity,” Downes wrote, the following March. Furious, Toscanini instructed NBC to have Rodzinski drill the orchestra it was hiring for the Italian’s sensational return to New York.

After the Philharmonic corrected its error (at least as Rodzinski saw it) at the end of 1942, Rodzinski had the unanimous support of the critics; their venom was infinite for Barbirolli, whose highly subjective aesthetic appalled writers who had been entranced by Toscanini’s lean, driven style.

“The orchestra needs overhauling in every way,” Downes insisted. Time reported that guest conductors referred to its “undisciplined and arrogant members as ‘the Dead End Kids.’” When Rodzinski had 14 musicians fired months before his arrival, including the concertmaster, it was taken as evidence of a seriousness that Barbirolli was perceived to have lacked.

After Rodzinski’s first concert in October 1943, performing Barbirolli’s beloved Elgar in a conscious attempt to demonstrate how it ought to go, Thomson wrote, brutally, that it was “pleasant” to hear the Philharmonic play “all together.” By April, he was drolly reporting that the strings “now play in tune.”

Granted this kind of shade, Rodzinski could do little but shine. He focused on music of the previous hundred years and rarely went back beyond Schumann and Berlioz to Beethoven, Mozart or Haydn. In the Sony box, his Brahms symphonies push on without quite becoming overwhelming; his Tchaikovsky Sixth is rather cool — “too conventional, too objective and too civilized,” as Downes put it in a review of its corresponding concert.

Contemporary music did play a significant role in the Rodzinski era, taking a spot on most of his programs. Trying to duke it out with Serge Koussevitzky’s Boston Symphony Orchestra, Rodzinski competed to premiere the works of Shostakovich and Prokofiev, whose Fifth Symphony he was the first to release on record. Hiring Leonard Bernstein as his assistant conductor in New York, Rodzinski also supported American composers like William Schuman and William Grant Still. Morton Gould’s “Spirituals,” Aaron Copland’s “Lincoln Portrait” and Darius Milhaud’s “Suite Française,” all composed during World War II, receive convincing recordings in the Sony box.

Still, for Rodzinski the Philharmonic ultimately became the conductors’ graveyard it had long been reputed to be — far more so than for Barbirolli, who went on to greater things with the Hallé in Britain. Despite uniform praise for the excellence Rodzinski enforced, his position was never secure.

Contract negotiations with the Philharmonic’s manager, the powerful agent Arthur Judson, dragged on so interminably that Rodzinski’s lawyer, the future C.I.A. director Allen Dulles, gave up. The conductor was left to discuss terms on his own, as he grew more anxious about his lack of control over guest conductors — his rival Stokowski among them — and what they performed.

The Chicago Symphony, rebuilding after Désiré Defauw’s brief postlude to the 37-year tenure of Frederick Stock, sniffed an opportunity, and offered a post around Christmas 1946. With that offer in hand, Rodzinski dressed the Philharmonic’s board down with an hourlong speech about his problems with Judson on Feb. 3, before leaking his resignation to the press that night. The board fired him the next afternoon, amid mutual recriminations.

“New York,” Rodzinski vowed to a reporter, “will go down.”

He lasted just months back in the Midwest. Critics there gave by-now-familiar praise to the rise in the quality of playing, and there were operatic successes, but Rodzinski again came up against entrenched interests, racking up deficits and finding far less willingness to make changes of personnel. Chicago’s board fired him in January 1948.

There would be no more prominent posts for Rodzinski, the perfectionist who set the standards for the post-World War II era. He would make more recordings in the 1950s, mostly with the Royal Philharmonic on the Westminster label, but his health declined, and he would never again appear with the New York Philharmonic. He died in 1958.