The live video of the Jan. 6 attack on the U.S. Capitol was largely images from a distance: a sea of attackers seeping up the steps and through the entryways. It was like watching a malevolent tide slowly threaten to drown democracy. It could not possibly get worse than this.

But it could. And it did, as more close-up and graphic videos of the American carnage that Trumpists unleashed in the Capitol emerged on social media and TV through the weekend.

Wednesday’s insurrection was one of the rare live-TV atrocities that grew only more sickening, more terrifying, more infuriating as more days passed. What we remember of the 9/11 attacks, for instance, is largely what we saw in the first few hours: the planes hitting, the towers collapsing, the pedestrians fleeing. Terror attacks, mass shootings — the shock hits us up front, and then we process it.

But last Wednesday seemed to last for days. New smartphone videos of violence came out one by one. The horror came in waves, the attack revealed with every image as more bloodthirsty and deplorable.

Watching the stunning coverage on Wednesday, I kept noticing all the flags waving in the crowd. In a video that aired on CNN this weekend, the flag becomes a weapon. An assailant outside an entrance beats a prostrate police officer with the pole of an American flag while others hurl them at defenders like javelins, the kind of too-perfect metaphor that only reality can get away with. 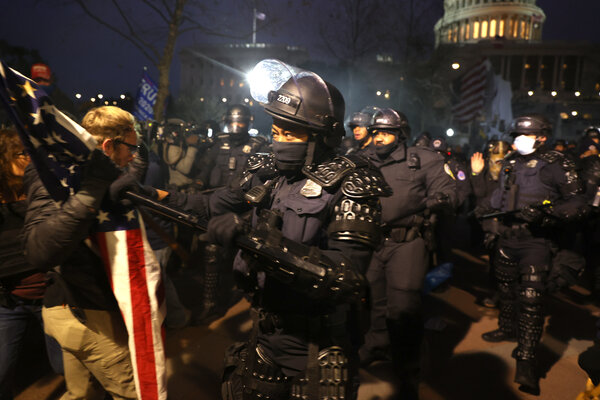 In another, the mob crushes a police officer in a door while he screams in pain. In another, rioters chant: “Hang Mike Pence! Hang Mike Pence!” In another, attackers hammer at a door, then a gunshot fires — through the door, you see only the gun and the hand holding it — killing a woman in the crowd.

In a video captured by Igor Bobic of the Huffington Post, an officer gets a rampaging crowd to turn to its left and chase him down a hallway, diverting it from the unguarded door of the Senate chamber. Even that moment of bravery is chilling: How close history may have come to taking a bloodier turn right.

Even the sight of the aftermath showed how brutally intimate the violation was. On “60 Minutes” Sunday, Nancy Pelosi walked Lesley Stahl through the House chamber and her office suite: a shattered mirror, the conference table under which she said her staff hid in the dark for two and a half hours while intruders pounded on the entrance.

The horror was not just in seeing the People’s House ransacked and bloodied. The horror came in having already seen it live, and then realizing we had scarcely seen what was happening at all. Were we a few minutes away, one wrong turn here or there, from a vice-presidential assassination, an on-camera massacre of legislators, maybe even the effective end of American democracy?

Seeing how close we may have come is enraging, not just against the mob but everyone who minimized the danger of this mass delusion, everyone who euphemized the kind of bigotry on full display here, every responsible person who failed to prepare for the attack, every leader who served up the stolen-election fantasy that encouraged this spasm of insanity.

As appalling as Wednesday was, many of the initial images focused on the eye-catching and even the absurd: a rioter in face paint and Viking horns, another strutting with Ms. Pelosi’s lectern like a state-fair prize.

We knew on Wednesday this was no harmless goof. But the much-shared images might have implied that this was part carnival sideshow, a last gasp of attention seekers and cosplayers.

The great mistake of the Trump years has been not realizing that a thing, or a person, can be both ludicrous and dangerous. We live in the era of weaponized irony and killer clowns (a central image of recent pop culture, from “Joker” to “American Horror Story: Cult”). The crowd that tried to mug democracy Wednesday was both cosplaying insurrection and genuinely committing it.

The rush of new images has also helped the authorities charge and investigate more suspects, which has complicated longtime media misperceptions of the Trump era and Trumpists.

These were not simply basement-bound yahoos or the “economically anxious.” Some of them were police officers, ex-military, elected politicians, well-to-do conservative burghers, flying to Washington to either demand the election result they wanted or beat one out of Congress.

This steady drip of videos and reports, each bit seemingly more disturbing than the last, has created a feeling of delayed-onset trauma. Many viewers likely saw them for the first time Monday morning, when the broadcast morning shows ran video packages and chronologies, with graphics illustrating how physically close the rampage came to being a potential mass slaughter.

On the other hand, the pro-Trump bastion “Fox and Friends” focused on impeachment and ran several “Big Tech Censorship” segments on the tech industry’s actions against the president and the right-wing social-media haven Parler. Only brief snippets hinted at the inconveniently awful video context behind all this news happening in the first place.

For those who have eyes and will see, however, the enormity of what happened Wednesday — and what could have happened but didn’t — has only sunk in deeper.

I felt it this morning, as the cable networks turned to live news from Congress, where Democrats introduced an article of impeachment against President Trump for incitement of insurrection, in the same halls we saw besieged. The images were plain video wallpaper; officials milled about in the staid setting we associate with long speeches and C-SPAN marathons and, frankly, tedium.

But even watching this relatively static scene, I could feel myself tense up, eyes drifting to the doorway, waiting for the jump scare.

Who knows how long it will be until looking at Congress can feel boring, or safe, again?