Add COVID-19 testing to the differences between the women’s and men’s tournaments that has coaches and players unhappy in Texas about what they say is a growing list of inequities.

Stanford coach Tara VanDerveer issued a statement Saturday night upset at “evidence of blatant sexism” that is “purposeful and hurtful” leaving her program feeling betrayed by the NCAA.

“Women athletes and coaches are done waiting, not just for upgrades of a weight room, but for equity in every facet of life,” according to the statement. “Seeing men’s health valued at a higher level than that of women, as evidenced by different testing protocols at both tournaments, is disheartening.”

On Sunday, she acknowledged how difficult it is to run a tournament during the challenging times of COVID-19.

NCAA basketball administrators apologized Friday for the differences between the tournaments and vowed to do better after photos went viral highlighting the contrast between the women’s weight room and the men. 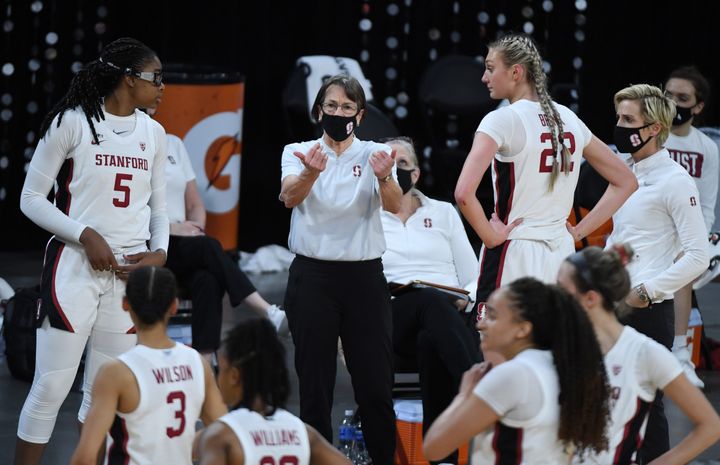 “What I pointed out was the leadership making some decisions that are clearly one way for the men and one way for the women,” VanDerveer said Sunday night. “I was most upset with the testing because obviously I’m not as young as our players. But our players have handled things extremely well. And what we’ve really tried to focus on is not get bent out of shape about the swag bag, they have addressed the weight room, but to just come out and focus on playing and playing well.”

But Stanford asked university presidents and conference commissioners for accountability on who made these decisions and why after team performance coach Ali Kershner publicly pointed out the issue.

“I’m extremely proud that our strength and conditioning coach Ali spoke up and said what she said,” Stanford senior Kiana Williams said after he team’s first-round victory against Utah Valley. “She kind of got the train on the tracks and made some stuff happen. It was very unfortunate and hurting to see that we didn’t have the same effort put in. We don’t need the exact same weight room as the men, but there just could have been a little bit more effort. I’m extremely thankful that they made changes as quickly as they did.”

The NCAA followed recommendations of its COVID-19 medical advisory group, collaborated with the CDC and local medical authorities at each location for testing requirements. The NCAA advisory group said either daily PCR or daily antigen testing were “equally effective models for basketball championships.”

The recommendation was to adopt the testing approach that worked best with the provider and local health officials. The director of the San Antonio Metropolitan Health District reviewed and approved using daily antigen tests and weekly PCR tests.

The NCAA noted both men and women required either the daily antigen or PCR testing for seven straight days before arriving in Indianapolis or San Antonio.