Days before Afghanistan fell to the Taliban, Batol Khan could not shake a sense of foreboding.

Ms. Khan, who left the country six years ago, warned her family to prepare for the worst: “If something happens, just grab your documents and run,” she said. “Don’t look back.”

Two days after the takeover, Ms. Khan’s mother and sister were among the crowds at the Kabul airport. They hid their money and passports in their undergarments. At times, Ms. Khan could not reach them and feared for their safety. But after five days of waiting in squalid conditions — then several days of traveling — they arrived in El Paso. When they are able to resettle, they plan to reunite with Ms. Khan in Brooklyn.

Their arrival in August was a relief for Ms. Khan, 33, who moved to the United States under a special immigrant visa. Ms. Khan had begun to feel vulnerable because she considered herself an outspoken woman, and had been working in Afghanistan with the United Nations and the United States Agency for International Development.

The day she landed in America, she was connected with Catholic Charities of the Archdiocese of New York, a beneficiary of The New York Times Neediest Cases Fund. The nonprofit group helped her secure medical insurance, a subway card and SNAP benefits. Agency workers also reviewed her résumé and conducted mock interviews to help her with her job search — support that Ms. Khan, who works in human resources, has not taken for granted.

“When you’re patient and kind with someone who has left everything behind, the whole experience will be different,” she said. “You know that you are in safe hands.”

Now, Catholic Charities is preparing to help her mother and sister with their resettlement. The organization has set aside $500 from The Fund to provide them with clothing, furniture, transportation assistance and other necessities.

In recent weeks, the agency has helped about a dozen people with special immigrant visas who have arrived in the city, said Mario Russell, the director of Catholic Charities’ immigrant and refugee services in New York. The number is likely to increase: More than 1,000 Afghans are expected to resettle in New York State over the next six months.

Ms. Khan said watching the Taliban’s takeover had been extremely painful. But after her family landed in Texas, she spoke with her sister, who emphasized a silver lining. “Isn’t it amazing that we are in the same country?” she asked Ms. Khan. “We’re basically breathing the same air.”

With that realization, some darkness gave way to a glimmer of light.

Catholic Charities is among nine beneficiaries supported by the The Fund’s 110th annual campaign.

The Fund began in 1912, when The Times’s publisher, Adolph S. Ochs, sent a journalist to report about those facing hardship and receiving help from social services agencies in New York City. The goal was to publish 100 stories. The short articles struck a chord with readers, who donated about $3,600. Since then, The Times has worked with nonprofit organizations each year and has raised over $320 million in total, which has been distributed not just to organizations in the city, but also domestically and internationally.

The 2020-21 campaign raised $9,794,932.53 for 10 organizations. The Fund’s 2021-22 campaign will feature articles outside the paywall on how the agencies it supports are assisting those in need. This year, there are nine beneficiaries:

Catholic Charities of the Archdiocese of New York

The New York Times Company covers the administrative costs of the campaign, and the organizations spend the money at their discretion, often to cover holes in public assistance. Donations of $100,000 or more from trusts and estates go to The Fund’s endowment. Online contributions can be made through GoFundMe.

Among the beneficiary agencies assisting in Afghan relief efforts is World Central Kitchen.

“We were watching the situation unfold in Afghanistan and feeling very helpless,” said Nate Mook, the chief executive of the organization.

When the evacuations began, World Central Kitchen coordinated with several government agencies and, in late August, teamed up with local restaurants in Virginia to feed thousands of refugees landing at Dulles International Airport — many of whom had gone hours, or even days, without a decent meal.

The nonprofit went on to distribute more than 60,000 meals to Afghans at Dulles, as well as in Philadelphia and in Spain.

UJA-Federation of New York, another organization supported by The Fund, is assisting Afghans resettling across the country through two grants. It has donated $100,000 to HIAS, a Jewish resettlement agency, to provide mental health services to Afghan refugees in California, Florida, Massachusetts, Michigan and New York. The goal is to ease the successive shocks of escaping one’s homeland and starting anew, said Alex Roth-Kahn, the managing director of UJA-Federation’s human service division.

“It’s both about processing the immediate trauma of departure, as well as acclimating to a very, very different culture,” she said.

UJA-Federation has also donated a $30,000 grant to Women for Afghan Women, an organization that will provide rental assistance, employment training, English language classes and more to dozens of Afghan refugees in New York.

And another Fund beneficiary, the International Rescue Committee, has support for refugees and displaced people at the heart of its mission. It worked with an American couple attuned to the challenges that the new arrivals would face who wanted to welcome an Afghan family at the Sacramento International Airport.

The pair — Adrian Kinsella, a former Marine, and his wife, Kate Hoit, an Iraq war veteran — anticipated that the United States would see an influx of Afghan refugees. They helped an Afghan interpreter who worked with Mr. Kinsella’s platoon move to the United States in 2014, and they knew that Afghans fleeing the country this year would face many roadblocks adjusting, from securing essentials to navigating medical care.

“We wanted to do anything we could do to possibly help,” said Ms. Hoit, 37. 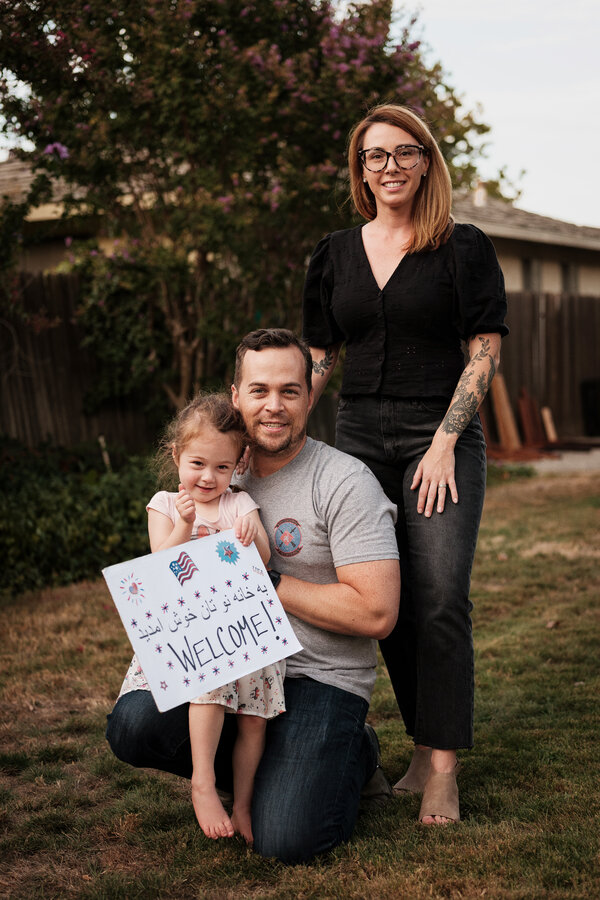 Mr. Kinsella, 36, received a hero’s welcome when he returned from his deployment in Afghanistan, he said, and he asked the International Rescue Committee if he could do the same for the Afghan arrivals. Days later, he, Ms. Hoit and their 3-year-old daughter, Juniper, greeted the family at the airport holding “Welcome” signs in English, Pashto and Dari.

“My entire adult life has been shaped by these wars,” Ms. Hoit said. “This allowed us to do something for the people that had stood by us for 20 years.”

The couple has greeted a few more families since then and has been mobilizing other volunteers, particularly veterans, interested in lending a hand and connecting them with the International Rescue Committee.

“They’re really taking on this empowered coordinating role,” said Missy! Orr, the development and communications manager for the organization in Northern California.

The couple’s efforts have even inspired a new volunteer opportunity at the International Rescue Committee’s Sacramento office, which received nearly 300 Afghan arrivals in August, Ms. Orr said. The initiative aims to mirror programs that the nonprofit operates in other offices, pairing volunteer families with newly arrived refugees to help support their transition.

With Afghans settling in the United States, Mr. Kinsella feels as though roles have been reversed.

“It’s our turn to be hospitable,” he said. “To have them as our guests and to show them around our country and help them succeed.”

Trusts and Estates That Gave

L and B L Charitable Trust

The US Charitable Gift Trust

Donations to The Neediest Cases Fund may be made online or with a check.