Welcome to Best of Late Night, a rundown of the previous night’s highlights that lets you sleep — and lets us get paid to watch comedy. We’re all stuck at home at the moment, so here are the 50 best movies on Netflix right now.

Dancing in the Streets

Late-night hosts celebrated the presidential election results on Monday, sharing in the excitement of Biden supporters across the country.

“You know you were a bad president when people were celebrating an old white centrist like he was the sunset at Burning Man,” Seth Meyers said on “Late Night.”

“Wow, did he win an election or the World Cup? Did those people vote for Biden or did they just pull down a statue of Saddam?” — SETH MEYERS

“Yeah, for 75 million Americans, the announcement was like the greatest unboxing video of all time.” — JIMMY FALLON

“I will always remember where I was when I heard the news — I was sitting in front of the TV, like I had been 24 hours a day for the past five days.” — JIMMY FALLON

“I tell you what, it took almost the whole four years, but Donald Trump finally got a massive crowd to cheer him outside the White House.” — JIMMY KIMMEL

“What a weekend it was. People were dancing in the streets like Ewoks after they blew up the Death Star. Darth Tax Evader has been toppled, and America responded with a dance party.” — JIMMY KIMMEL

“I mean, it’s bad enough for your boss to tell you to clean out your desk, but can you imagine if on the way to your desk the entire office was lining the hallways to boo you?” — TREVOR NOAH

“Wolf Blitzer was like, ‘We waited till Saturday because we knew people would want to go out and get turnt.’” — JIMMY FALLON

“Never a good sign when the majority of Americans react to you losing your job the way they did to us getting Bin Laden.” — STEPHEN COLBERT

“And listen, I get that this is hard for Donald Trump. Processing a loss like this is going to take time. I mean, this is the first time he’s ever failed at anything besides his casinos, his airline, his mortgage, Trump Steaks, Trump University, Trump magazine, Donald Jr., Eric, etc.” — JIMMY KIMMEL

“It feels like America is — what’s the word — great again?” — STEPHEN COLBERT

“This is the second-most embarrassing thing to happen to Rudy this month. Somehow he managed to out-Borat himself.” — JIMMY KIMMEL, on Rudy Giuliani’s Saturday news conference at Four Seasons Total Landscaping in Philadelphia

“One theory is that someone in the campaign mistook the venue for a luxury hotel. Embarrassing, but not the first time something like this has happened. After all, who can forget when F.D.R., Stalin and Churchill met at the Yalta Discount Toilet Emporium? ‘Flush de Führer!’” — STEPHEN COLBERT

“The press conference was located next to a sex shop and a crematorium. Honestly, that’s about where you’d expect Giuliani to have a law office.” — JIMMY FALLON

“When Rudy walked into Four Seasons Landscaping, everyone was like, ‘The sex shop is one over.’” — JIMMY FALLON

“That’s right, they held a press conference at a landscaping company next to an adult bookstore and a cremation center, so it was one-stop shopping for Rudy.” — SETH MEYERS

“The only thing missing from this scene was a store called ‘Metaphors ‘r’ Us.’” — SETH MEYERS

“Makes sense — the Trump campaign is somewhere between screwed and dead.” — STEPHEN COLBERT

“Now, how this happened is unclear. My guess? Incompetence.” — STEPHEN COLBERT

“And this visual should tell you all you need to know about how it’s going, OK? A big ugly garage door, a cement wall, a garden hose, and an adult novelty shop right next door — with booths and everything. This is Rudy Giuliani at his Rudiest.” — JIMMY KIMMEL

“Looks like the Penguin announcing layoffs to his henchmen.” — STEPHEN COLBERT

“Looks like a ‘Storage Wars’ episode hosted by the Cryptkeeper.” — STEPHEN COLBERT

“It looks like the dedication of a new performing arts center at Chernobyl.” — STEPHEN COLBERT

“Although it’s possible Giuliani goes there all the time; I wouldn’t be surprised if his dentist requires landscaping tools.” — STEPHEN COLBERT

The Bits Worth Watching

What We’re Excited About on Tuesday Night

Gillian Anderson will talk about playing Margaret Thatcher in the new season of “The Crown” on Tuesday’s “Jimmy Kimmel Live.”

Also, Check This Out 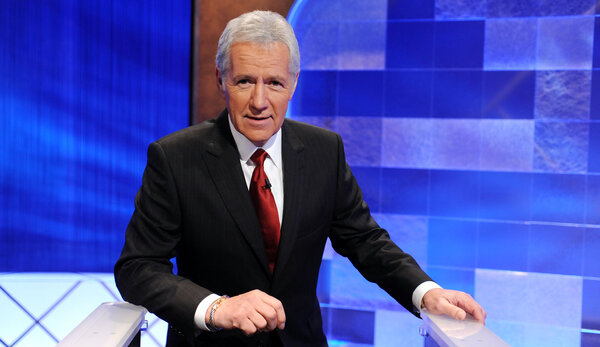 The late “Jeopardy” host Alex Trebek was a cultural icon celebrated in a regular “Saturday Night Live” sketch with Will Ferrell and appearances on shows like “Baywatch,” “The Simpsons” and “RuPaul’s Drag Race.”