Even the people at Kyle Richards’ dinner party on the Wednesday, April 29, episode of The Real Housewives of Beverly Hills didn’t know what Denise Richards’ husband, Aaron Phypers, was trying to say when he opened up about his job.

Denise, 49, and Aaron, 47, made headlines after the actress warned him not to talk about his job because they have “people following” them. 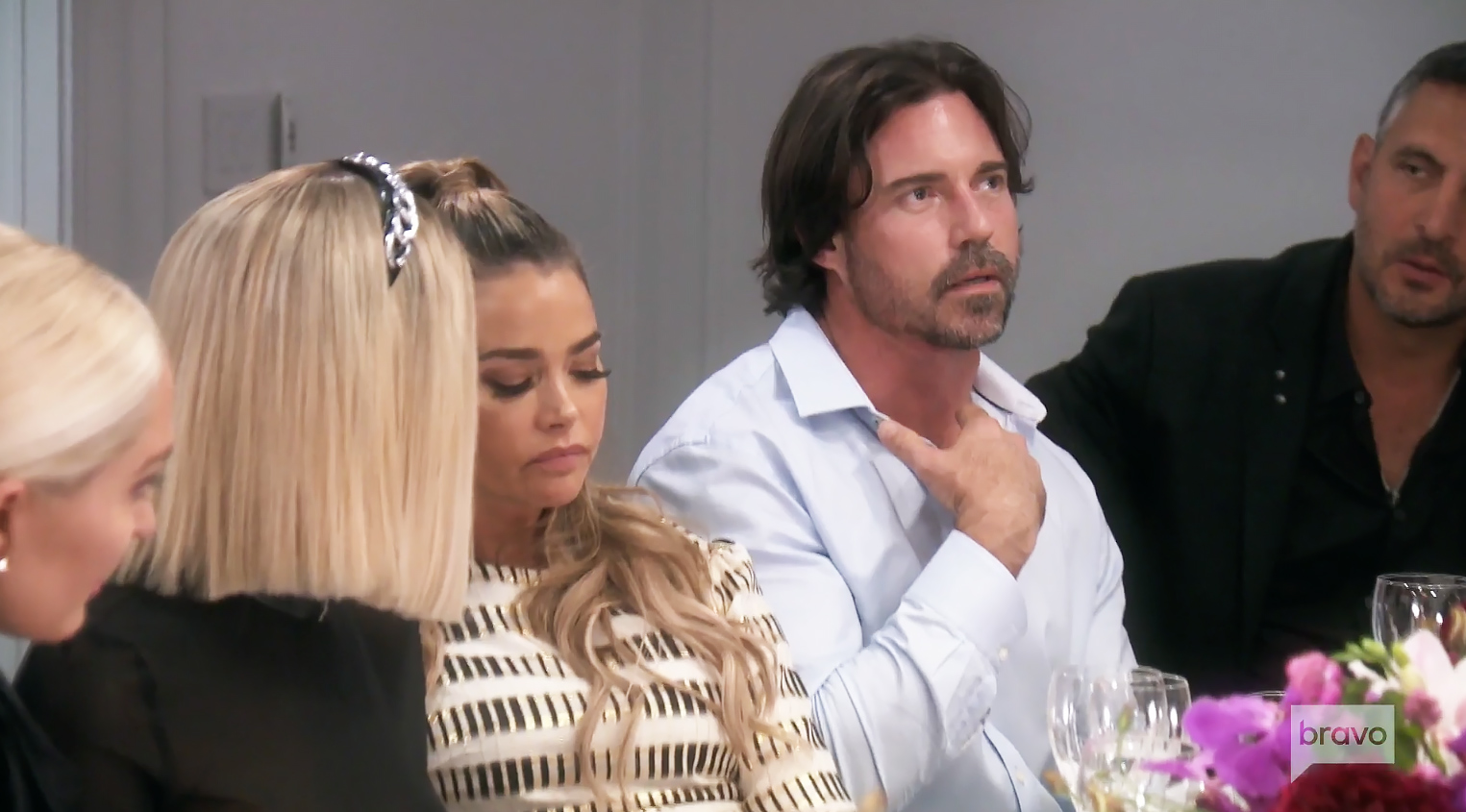 “Everything you’ve been taught about how disease process and stuff works is not true,” Aaron, who runs a healing center in Malibu, claimed on the episode. “[At the] age of 12, I was living next to the largest nuclear facility in North America. I watched everybody die of cancer. I couldn’t understand why we could split an atom with sound and cause a nuclear explosion. If you look at an atom, there’s lots of space, right? Electron, proton, neutron, whatever. There’s a lot of space, space, it’s empty space, right? 99.9 percent is space, but it’s oscillating at a frequency that appears to be real in our reality. Does that make sense?”

Kyle, Teddi Mellencamp, Erika Jayne, Lisa Rinna, Garcelle Beauvais, Sutton Stracke and Dorit Kemsley were all clearly confused during the episode. After the Halloween actress shared a clip of her cringey face from the dinner party via Instagram, Dorit replied.

“The face! 😂 All of our faces on tonight’s episode! 😬😳,” the swimsuit designer wrote.

Kyle also responded to a social media user who wrote, “Kyle … you and those damn dinner parties.”

“I never learn,” she quipped back.

Justin, meanwhile, noted that he still doesn’t know “what Aaron was trying to explain.”

“I think everybody was confused because it just came out of left field,” the Daily Pop host said. “I think some people are enlightened and have ventured off into other dimensions of their mind. And I’m just not one of those people, but I think Aaron is one of those people.”

Teddi, for her part, fired back at Sutton’s claims at the dinner party that she is “boring” — especially when she’s pregnant. (The accountability coach welcomed daughter Dove in February.)

“‘And then pregnant God help us…’ is what got to me,” Teddi, who broke down in tears on the episode, tweeted. “I’ve been very open about my fertility struggles. So for somebody to come in with her ready to wear and put negativity on it really upset me. … If I broke down and cried every time I was called boring, Dove would need to swaddle ME five times a day. #RHOBH.”

The Real Housewives of Beverly Hills airs on Bravo Wednesdays at 8 p.m. ET.