Usually when I see an awful show I try to understand what happened. What were the authors trying to accomplish? What experience did they mean to impart, what feelings did they hope to arouse?

I mean beyond those I scrawled in my notebook during “Dragon Spring Phoenix Rise,” which opened at the Shed on Thursday: experiences like “Huh?” and feelings like “Get me out of here.”

“Here” was the McCourt, the spectacular if poorly ventilated new performance space created when the Shed’s 120-foot-tall puckered carapace is rolled eastward from the main building to cover some of the few square feet of Hudson Yards not colonized by commerce. But the McCourt might as well be a Lululemon as long as it’s housing “Dragon Spring”: a product involving acres of spandex and designed to be internationally inoffensive.

The show’s mismatched creators — apparently assembled by random spins of a Rolodex — call the result a kung fu musical. I can report that what the director Chen Shi-Zheng and the “Kung Fu Panda” writing team of Jonathan Aibel and Glenn Berger have come up with does involve martial arts and tonal sounds. But to the extent kung fu usually provides thrills, and musicals usually tell stories through song, the new genre is a misnomer if not an outright lie.

For one thing, there are only (by my count) three songs, by which I mean words sung by characters in a story. (These wisps of tune, wanly sung and with lyrics that sound mistranslated from Klingon, are credited to the pop musician Sia and others.) Most of the show’s music is disembodied and ambient, whether live or prerecorded I could not tell.

In any case, none of it furthers the plot. I’m not sure that a bulldozer could further the plot, which basically involves a secret clan of kung fu fighters in — who knew? — that hotbed neighborhood of Flushing.

Naturally, they are engaged in a multigenerational rumble with other kung fu fighters. Lone Peak (David Patrick Kelly) is the old grandmaster of the House of Dragon; when Little Lotus, his daughter, takes up with Doug Pince, representing a breakaway sect, it’s “Queens Side Story.”

If only! But actually no such clarity as to the differing values or territories of the two gangs exists. Montana Levi Blanco’s chic but interchangeable costumes, all torn black undergear with futuristic cuts, make the ensemble look like an intergalactic touring company of “Chicago.”

Nor are the six named characters characterized beyond good and evil. We do not know what anyone’s beef is with anyone else, or why (for instance) when Little Lotus (PeiJu Chien-Pott) and Doug Pince (David Torok) marry, they give birth to a pair of twin light bulbs. (One is pink and one blue.) 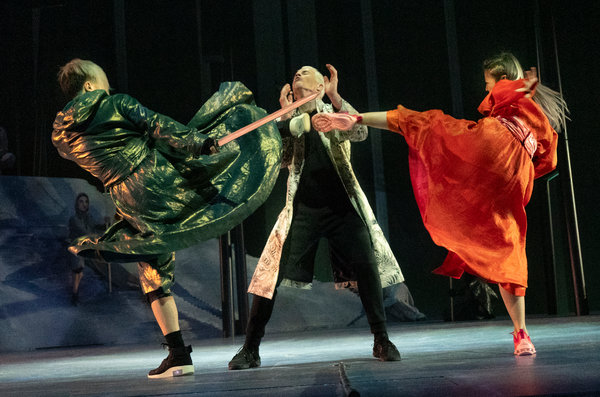 In Act Two — the turgid pace of Mr. Chen’s direction stretches the evening to nearly two hours — it will fall to those light bulbs, now young adults, to restore peace through joint parricide and quasi-incest.

These mindless stabs at narrative make a bizarre basis for what is evidently meant to be cutting-edge stagecraft. Seats for 1,200 patrons are arranged on three sides of a playing space crowned by panels of sheer fabric wafting above the action like jellyfish. (The set is by Mikiko Suzuki MacAdams.) Fire is involved, as is a modest amount of aerialism. There’s also a pretty moment when Little Lotus somehow gets hooked up like a hose to become a fountain, flooding (or rather empuddling) the stage.

None of this will raise the heartbeat of anyone who’s seen a Cirque du Soleil show. The mostly purple and green lighting, however, by Tobias G. Rylander, includes strobe effects that could induce a stroke in someone who has already died of a stroke.

By default, it seems that the engine of “Dragon Spring” is meant to be its martial arts exhibitions, staged by Zhang Jun, but they too are a problem. Because the performers cannot connect with their opponents while executing their elaborate kicks and hand chops, the visceral thrill of whoosh and thwack is missing, replaced mostly by compensatory grunts and obvious inches of empty air. Real moves, no contact.

Nor can these movements, in themselves, create narrative — as the Cirque team discovered when trying to make acrobatics tell stories in hybrid musical disasters like “Paramour.” So while there is some excitement here, especially in fights that involve clanging sticks and blades, it is the excitement of mere exertion, detached from story value or emotional engagement.

The more conventional dancing (choreographed by Akram Khan) does a better job of expressing at least generic angst. The ensemble of 14 is very upset about … something. And very agitated about … something else.

What has me upset and agitated isn’t so much the silly, boring show itself. Disasters are a useful part of the cultural ecology, like controlled burns.

But there are opportunity costs here as well: Think of all the things an investment of this size — “in the low millions,” according to Alex Poots, the Shed’s artistic director — could have achieved, or at least attempted, if more wisely spent? The “Dragon Spring” stage alone cost $650,000 to build.

Theater is hard enough to get right when it emerges from coherent need, not a cultural blind date. And the Shed especially, supported with $75.5 million in public funds, needs to set higher goals than those of a high-end mall.

When you purchase a ticket for an independently reviewed play or musical through our site, we earn an affiliate commission.

This information was last updated on June 27, 2019

Jesse Green is the co-chief theater critic. Before joining The Times in 2017, he was the theater critic for New York magazine and a contributing editor. He is the author of a novel, “O Beautiful,” and a memoir, “The Velveteen Father.” @JesseKGreen • Facebook