If you purchase an independently reviewed product or service through a link on our website, SheKnows may receive an affiliate commission.

When Donald Trump was running for president for the first time around in 2016, the world was watching. And apparently, royal fans can count Queen Elizabeth II as one of the world leaders who was fascinated by the former reality star campaigning for the Oval Office.

According to Prince Harry’s memoir, Spare, via an excerpt obtained by Us Weekly, the Queen was very interested in Meghan Markle’s thoughts on the political situation at their first meeting ahead of the U.S. election. Harry knew that “everyone in the world” was fixated on the race between Donald Trump and Hillary Clinton, so Meghan’s opinion was obviously one “Granny” wanted to hear — we love a royal who loves her tea.

However, Meghan took a very smart approach and realized that it was a “no-win game” to share her thoughts on the election (it’s pretty easy to assume she voted for Clinton). She strategically shifted the conversation to her life in Canada, where she was filming the TV show, Suits. “Granny looked pleased,” Harry wrote. “‘Commonwealth. Good, fine.’”

Queen Elizabeth eventually had her time with Donald Trump, who was elected to the White House in 2016, but it was Meghan who had the best excuse to avoid meeting the former president during a state visit in 2019. The Duchess of Sussex was on maternity leave after having her son Archie, so any possible uncomfortable moments were completely avoided — she didn’t have to worry about chatting about American politics while she was an official royal family member.

Before you go, click here to see every time Queen Elizabeth has met the US Presidents! 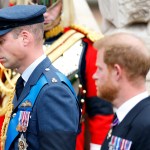