Prince Harry and Meghan Markle weren’t all about work on their trip to New York City for the Ripple of Hope awards. They were able to have a night on the town without their two kids, Archie, 3, and Lilibet, 1. Well, sort of.

It was the Duke of Sussex who charmed the audience at the event hosted by the Robert F. Kennedy Human Rights organization on Tuesday. He showed off his royal sense of humor by grabbing the mic and telling Kerry Kennedy that the gala was more than he expected. “I actually thought we were just going on a date night,” he joked. “So, I found it quite weird that we’re sharing the room with 1,500 people.”

We love a prince with a sense of humor! It’s rare for a member of the royal family to have a private date night out unless it’s behind closed doors. The prying eyes of the paparazzi are always lurking, but living in Montecito, California has offered an extra layer of privacy for the adorable couple to raise their young family. If they had settled in Los Angeles, it might be a different story — the pesky cameramen are everywhere there.

The dynamic duo was honored for their “heroic” stance against racism, which Kennedy noted in an interview with El Confidencial’s Vanitatis magazine. “They went to the oldest institution in U.K. history and told them what they were doing wrong, that they couldn’t have structural racism within the institution; that they could not maintain a misunderstanding about mental health,” she praised them. These hot topics will also be top of mind on Thursday, Dec. 8 when the couple’s Netflix series premieres — it probably won’t be a date night, but it will be a memorable one.

Before you go, click here to see more of Meghan Markle & Prince Harry’s milestones since leaving the royal family. 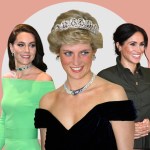