Ballet is an art of synthesis. Academic dance, music and visual design unite, sometimes with sublime alchemy. But are these really the most important ingredients for ballet?

A valuable new book, Nadine Meisner’s “Marius Petipa: The Emperor’s Ballet Master” (Oxford University Press), records how many other elements have often seemed more crucial: notably scenario, casting and politics. Petipa (1818-1910), French-born, was the most important shaper of Russian ballet before Serge Diaghilev, who formed his company, the Ballets Russes, in 1909.

Today we single out “The Sleeping Beauty” (1890) from Petipa’s long career: That glorious, abundant collaboration with Tchaikovsky, made in St. Petersburg, remains one of the definitive peaks of ballet classicism. From the 1920s to the ’70s, however, Petipa’s classicism was often hailed as a parent of ballet modernism. “Forward to Petipa!” was a war cry in the ballet experimentalism of the early Soviet era. Twentieth-century aficionados saw his ballets as enshrining pure dance and elevating aspects of humanity to the sublime.

In the 1960s and ’70s, when the West came to know the Elysian Shades scene of Petipa’s “La Bayadère” (1877), his reputation soared: He was the master architect of formal values in ballet. George Balanchine and Frederick Ashton, the dominant Western ballet choreographers of the second half of the 20th century, hailed him as such. 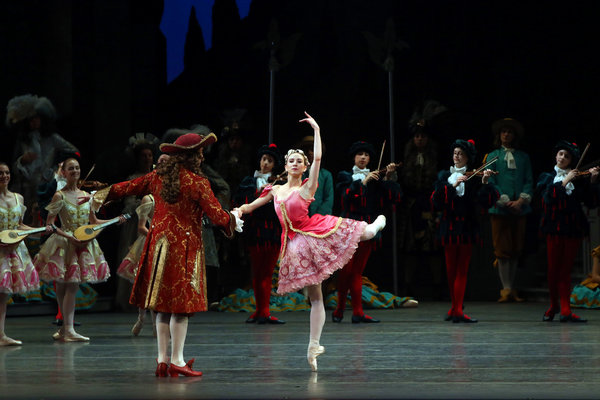 It turns out, however, that Petipa was working along quite different lines. Soon after his arrival in Russia at the age of 29 in 1847, he began making ballets that were peak artistic expressions of the czarist regime: royalist, hierarchical, elitist.

Dynastic succession is a recurring theme in their scenarios. Peasants, when they reach the stage at all, are generally happy, except sometimes in affairs of the heart. Russia is almost never the location. The worlds depicted so intensely by Petipa’s Russian contemporaries — Dostoyevsky, Tolstoy, Mussorgsky, Rimsky-Korsakov and Repin — might have come from another planet.

Ms. Meisner’s book, the first full-length Petipa biography in English, is by far the most detailed and complete survey of his life and work to date. Not all its fascinations are cheering, however. Ms. Meisner retells, in all seriousness, many of the stories of Petipa’s ballets, even though their narratives are all too often dismayingly absurd.

And though dance made an important contribution in most Petipa ballets, in several it was far from their raison d’être. “King Candaules” (1868) ends, after its title character has died, with a scene in which his queen is haunted by his ghost until she drops dead; that, Ms. Meisner writes, is followed by a tableau in which, amid the other gods in the cloud-filled heavens, Venus-Astarte points “at the corpse of the hubristic queen who had dared to compete with the goddess of beauty.”

Fatuous, yes — and all too characteristic of other Petipa ballets. Such a narrative epitomizes what the Bolsheviks would soon want to sweep away.

Petipa’s story was also entwined with the careers of dancers and their influential supporters. In no country was balletomania as extreme as in Russia. Over 60 years with the Russian ballet, Petipa did marvels for ballerinas from Western Europe and Russia. We learn in Ms. Meisner’s book about the “ballerina war” of 1862-65, when the main excitement was caused by Maria Surovshchikova (Petipa’s first wife) and Marfa Muraveva, Russians both, and about the visiting Italians — notably Virginia Zucchi and Pierina Legnani — whose standards transformed Russian ballet at the end of the 19th century. 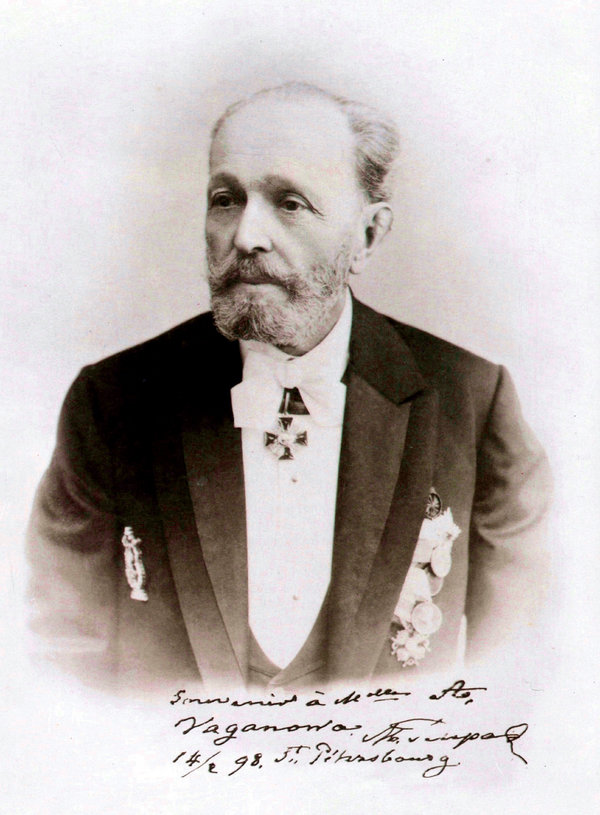 The super-ambitious Russian prima ballerina Mathilde Kschesinskaya (1872-1971), however, became Petipa’s enemy. Her power was immense: Having been the mistress of Czar Nicholas II in his youth, she became involved with two other grand dukes of the Romanov dynasty. She established a monopoly on a number of the best roles. When a director of the Imperial Theaters fined her for an anachronistic change of costume, she used her influence to have the fine canceled. The director, thus overruled, promptly resigned.

Kschesinskaya’s shenanigans, notorious even when she was at her prime, are a blatant sign of what was corrupt about the Russian ancien régime. It seems appropriate that when Lenin, on his return to Russia in 1917, addressed the revolutionary crowd in St. Petersburg, he used the balcony of the house that had been hers. Declaring his politics to be Russia’s future, he consigned her to its past. Or to the West: She escaped Russia with one of her grand dukes. (The Bolsheviks killed the other one.)

The successful 1917 revolution, however, was preceded by a failed one, in 1905. Hundreds of workers were killed or wounded when police fired on their peaceful protest march on what was called Bloody Sunday. Petipa’s favorite ballerina, Olga Preobrazhenskaya, danced that night. But although noting in his diary the flowers and gifts she received, he then wrote, “It’s too much — here they’re dancing, and in the streets they’re killing.” Then 86, he went with his youngest son to look at the broken shop windows on Nevsky Prospect, the city’s most eminent street.

These are among the many touching details of Petipa’s life that Ms. Meisner records. Yet she leaves unmentioned two other signal events of St. Petersburg’s 1904-5 winter. Isadora Duncan, dancing rapturously and with radical simplicity to classical music without any male partner, made her local debut, causing a sensation among artistic progressives. And Diaghilev presented an outstanding exhibition of historical Russian portraits that made both aristocrats and the intelligentsia reconsider Russian history.

Diaghilev gave a visionary summing-up speech as his exhibition closed. “I have become completely convinced that we are living at a terrible time of fracture: We are doomed to die so as to give rise to a new culture that will take from us all that remains of our tired wisdom,” he said. And he spoke of “a new and unknown culture that we are creating but which will clear us away.”

Did Petipa attend Duncan’s dance performances? Did he visit Diaghilev’s exhibition or read the text of his speech? He must have been aware of them. He certainly must have known of the ambitious young Diaghilev, who had caused crises during his brief time on the staff of the Imperial Theaters.

Ms. Meisner writes that “the Ballets Russes grew from the soil that Petipa had tended.” Well, yes — Diaghilev’s lead dancers were drawn from Petipa’s company — and no. In 1909, Diaghilev and his colleagues constructed a ballet company that was a vital corrective to what Petipa had been doing. They used music by leading Russian composers Petipa had ignored, notably Borodin and Rimsky-Korsakov; they absorbed multiple aspects of Duncan’s influence.

The three main composers of Petipa’s ballets were Cesare Pugni, Ludwig Minkus and Riccardo Drigo: all Western, all harmless, all decades behind the main current of classical music in their day. Diaghilev consigned them all to history.

In recent decades, however, all three composers have been infiltrating ballet repertory — thanks to Petipa. An abbreviated (but still long) pastiche of his preposterous “The Daughter of Pharaoh” (Pugni) was staged in 2000 by the Bolshoi Ballet, which has toured it to London and New York. Many Western troupes now have productions of the Petipa-Minkus war horses “Don Quixote” and La Bayadère.” The choreographer Alexei Ratmansky, using period notations and other sources, has reconstructed Petipa’s “Harlequinade” (Drigo, 1900); he’s also staged “Don Quixote” and “La Bayadère.” What cause could anyone have to cry “Forward to Petipa” today?

Perhaps every ballet era will reinvent Petipa. Over the last 40 years, the dance world has come to see “La Bayadère” not as a single act of formal dance classicism but as a full-length story ballet, abounding in melodrama, processions and scenic effects. It once seemed laughable that anyone would resurrect “The Daughter of Pharaoh,” whose titular character throws herself in despair into the Nile, which promptly entertains her with a great-rivers-of-the-world ballet; in this century, thousands have seen it in several countries.

Today, we’re also given — often onstage, as in Mr. Ratmansky’s reconstructions — new quantities of historical information about Petipa’s dance texts and style. These newer versions of Petipa are often less heroic in scale, less idealist in manner. Are we now seeing Petipa the proto-postmodernist, playing history games that are full of clever detail, meta-narrative, and incidental humor? I think we are. Petipa, changing his shape, seems determined to survive and dominate the ballet scene.

Alastair Macaulay was the chief dance critic of The Times from 2007 until 2019. @AlastairMacaul3