In “One Good Meal,” we ask cooking-inclined creative people to share the story behind a favorite dish they actually make and eat at home on a regular basis — and not just when they’re trying to impress.

As the creative director and chief executive officer of Italy’s Pellicano Hotels group, Marie-Louise Sciò spends her summers traveling between her three properties: the flagship Il Pellicano, on the Tuscan coast, which has been in her family since 1979 and first became famous in Slim Aarons’s midcentury photographs; Posta Vecchia, a rambling villa once owned by J. Paul Getty outside Rome that the family bought in 1980 (complete with its world-class art collection) and transformed into a hotel in 1990; and this year’s addition, Il Mezzatore hotel and thermal spa, inside a 16th-century watchtower just up the shore from where “The Talented Mr. Ripley” was filmed in 1999 on the island of Ischia. “It’s close to Capri,” she says, “but it’s much wilder.”

[Coming soon: the T List newsletter, a weekly roundup of what T Magazine editors are noticing and coveting. Sign up here.] 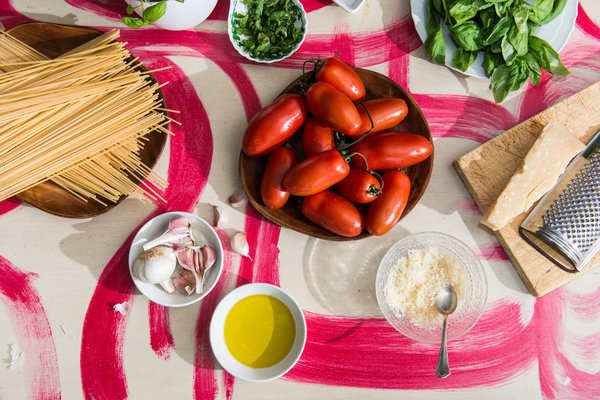 Given all the travel — she stays in the hotels to replicate the guest experience and provide feedback to her local employees — Sciò, who is in her early 40s and lives in Rome, doesn’t get to spend much time in her own kitchen. “I’m not a natural cook,” she says, “but a few things I can do really well.” One of those is spaghetti al pomodoro, with its classic alchemy of tomato sauce and pasta. “It’s definitely not for a big dinner, but something to have at home with my son and my boyfriend.”

Since the dish has so few ingredients, the key is to make sure they’re all of superior quality. The Parmesan should be aged, the basil freshly cut. Sciò prefers her pasta to come from the town of Gragnano, outside Naples, where it’s “rigorously dried slowly and from traceable grains,” then extruded through bronze dies. The only trick comes after the pasta finishes boiling. “It’s the pasta that goes into the sauce,” she says, “and not the sauce in the pasta.” Beyond that, preparation is dead-simple, “but the simple things are always the hardest, no?”

1. Heat the oil in a pan, but do not let it bubble or smoke. Add the crushed garlic clove followed by the tomatoes and salt, and cook for about 12 minutes. Let sauce cool completely, then run through a food mill until it’s perfectly smooth. Return sauce to pan and heat until warm.

2. Cook spaghetti in a pot of salted water until it’s al dente. Remove pasta from water and add to the pan to finish cooking in the warm sauce.

3. Plate spaghetti. Tear a freshly cut basil leaf with your hands to release its essential oils, and scatter over pasta. Serve with grated Parmesan.