Home » Entertainment » On Night 2, the Democratic Debate Wakes Up and Shakes Up

The second night of the Democratic debates had the same location as the first, the same set, the same moderators, the same format and the same number of randomly selected candidates.

But at some point in 24 hours, someone must have put caffeine in the water.

Where the first debate mostly involved 10 candidates talking near but not to each other, Thursday’s round, held again in Miami, was focused and combative, producing the most electric live moment of the young campaign so far and, possibly, putting a dent in the race’s front-runner. Even the audience was rowdier.

We sometimes talk about the substance and combativeness of debates like they’re different, even opposed. But ideally they work together. Every argument on a debate stage is about two things: what you say and how you say it. The first tells the audience what you want to do; the second allows them to imagine you doing it.

Senator Kamala Harris of California was the standout of the night, making arguments that not only damaged her targets but did so in multiple and deft ways.

Early in the debate, she interrupted a barrage of candidate cross-talk, saying: “America does not want to witness a food fight. They want to know how we’re going to put food on their table.” The line both established Ms. Harris as a fighter and appealed to voters sick of constant fighting. She broke up the food fight and walked away with the cake.

But the food-fight moment was only, well, table-setting for the moment of the night, when she turned to the poll leader, former vice president Joseph R. Biden Jr., and challenged him for reminiscing about working with segregationist senators and for his past work opposing busing for school integration, making the issue personal.

“There was a little girl in California who was part of the second class to integrate her public schools, and she was bused to school every day,” she said. “And that little girl was me.” (Minutes later, her Twitter account posted her childhood picture.) 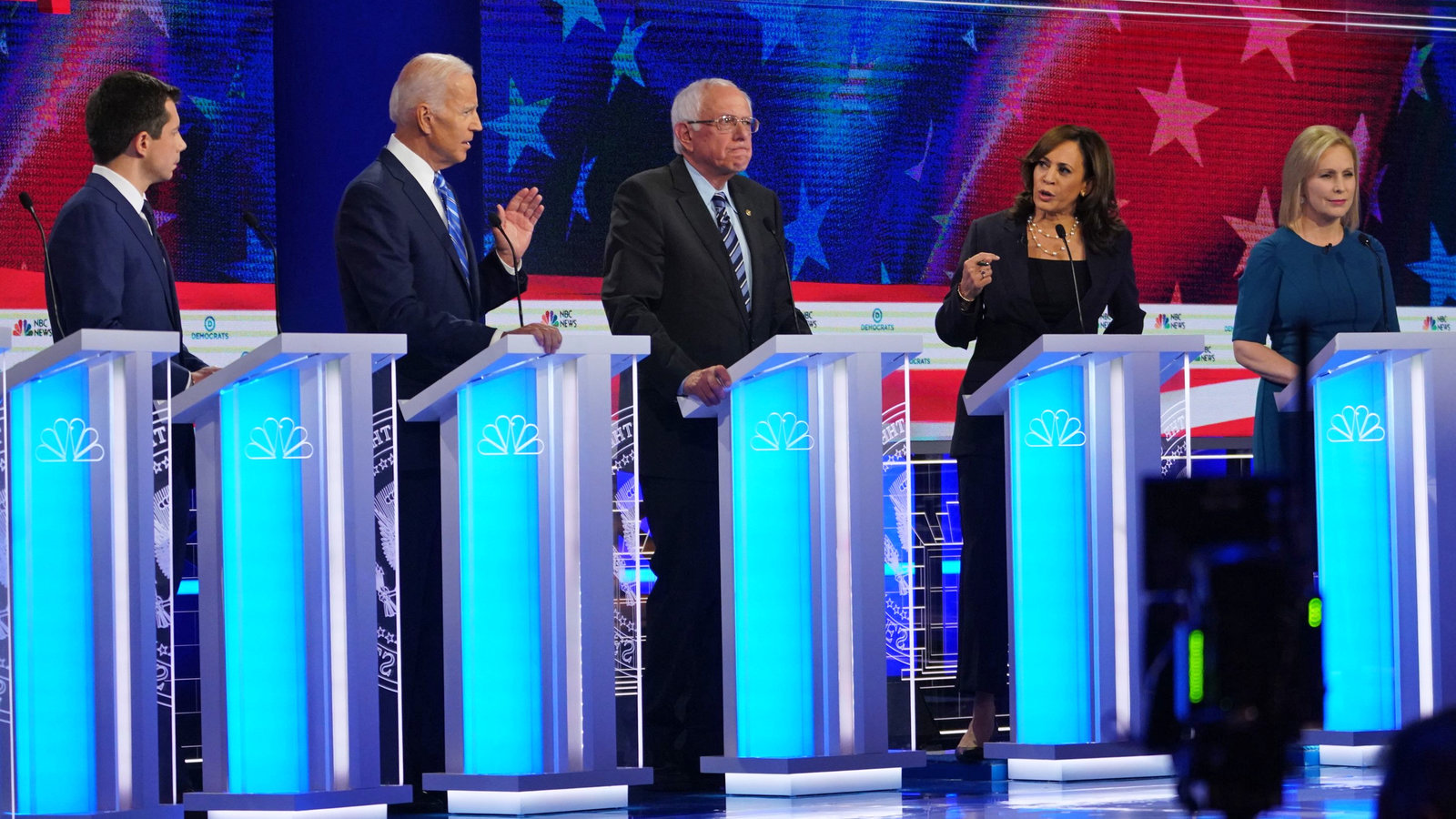 Let’s count the levels on that one, shall we? The former prosecutor showcased her ability to silence a powerful older man (cough Donald Trump cough). She knocked Mr. Biden back on racial issues, challenging his poll strength with black voters. She did it with a tone of sorrow rather than glee. She worked in her biography. And, just by the way, she dropped the generational hint that Mr. Biden, 76, was part of the system when Ms. Harris, 54, was still in grade school.

The moderators, having originally given Ms. Harris 30 seconds, let the drama play out for minutes, and the NBC producers quickly put it in split-screen. The visuals, certain to be played and replayed, are even more striking: Mr. Biden, head bowed, eyes downcast, his mouth at an uncomfortable slant, grimacing as the audience cheers the flogging of the party’s front-runner.

I’m not saying it was fatal — who knows anything in politics anymore? But if this were “Game of Thrones,” the guards would have locked the doors and the band would have played “The Rains of Castamere.”

The former vice president gave an irritated defense, but it may have been the first time in his career that Mr. Biden has seemed relieved to stop talking. “Anyway, my time is up,” he finished, never a phrase you want to hand the headline writers and meme-makers.

Mr. Biden came across rusty much of the night, though he had his own feisty moments, mostly targeted against President Trump; likewise his podium neighbor Bernie Sanders, the senator from Vermont, who picked up his finger-wagging expostulations where he left them in 2016.

Not every aspirant made their mark by leaving one in someone else. Pete Buttigieg, the mayor of South Bend, Ind., maintained a steady room-temperature cool, responding to his own damaging racial issue, involving police violence, with an introspective mea culpa on why the problem hadn’t gotten better in his city: “I couldn’t get it done.”

From the far end of the stage, the spiritual guide Marianne Williamson promised to “harness love for political purposes.” It’d be easy to treat her aphorisms, perfumed with burning sage, as comic relief. But she had a theme and a point: For all the high-minded focus on policy, the current president ran on a gut appeal to instincts and archetypes, and his opponent would need some counter besides bullet points.

Over all, the two-night, four-hour introduction was a good starting point, considering it had to accommodate a roster the size of the “Sgt. Pepper’s” album cover. NBC’s five moderators covered topics important to Democratic voters, including gun violence (in a city near the Parkland school massacre) and climate change (in a city threatened by rising seawater). Savannah Guthrie, in particular, diligently followed up and called out candidates’ evasions.

If only someone could debate Chuck Todd out of his love of lightning-round stunt questions. (For somebody who likes one-word answers, Mr. Todd does a lot of talking.) The candidates took turns giving longer and longer answers to his attempts to turn governance into a hashtag, eventually reducing the gimmick to a running joke.

It may not have been the most important fight of the night, but it was the most decisive win. Who says primary rivals can’t work together? 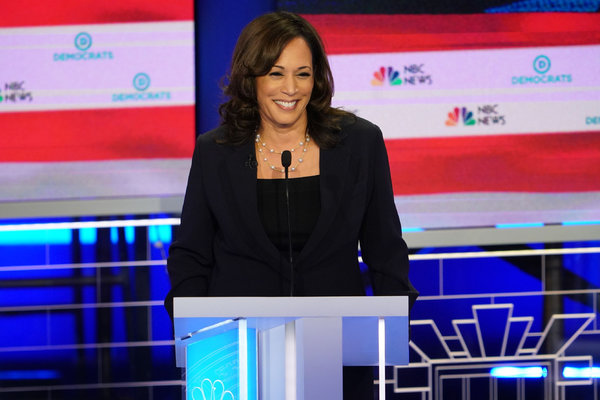 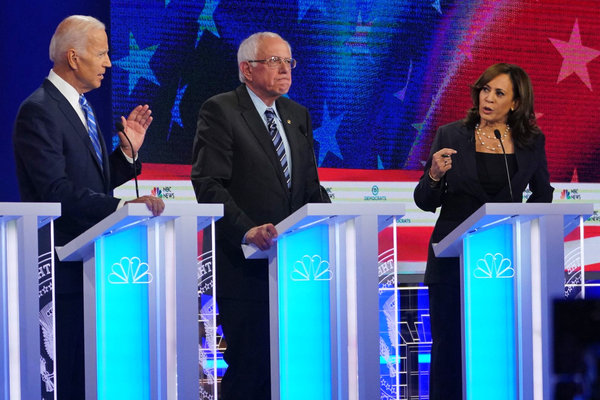 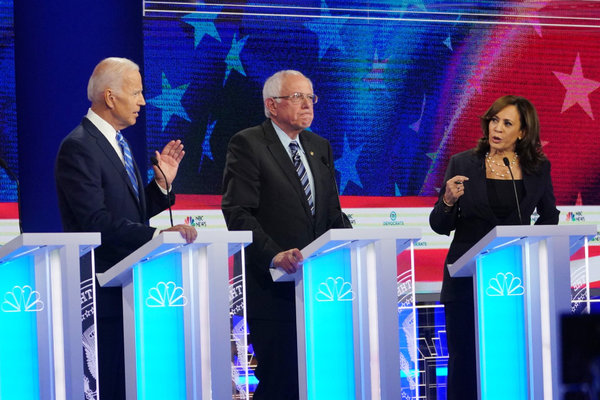 James Poniewozik is the chief television critic. He writes reviews and essays with an emphasis on television as it reflects a changing culture and politics. He previously spent 16 years with Time magazine as a columnist and critic. @poniewozik