Home » On London’s Reopened Ballet Stages, a Focus on the Contemporary 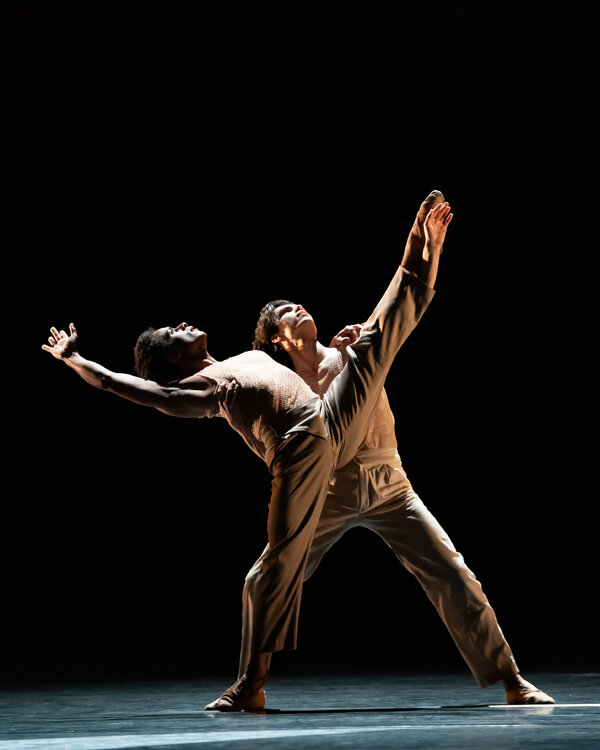 LONDON — The mood was ebullient on Tuesday night at the Royal Opera House, as the audience settled in for the first performance by the Royal Ballet in almost six months, a day after theaters and museums were officially allowed to open in England. The disembodied voice asking people to turn off their cellphones got rousing applause before the lights went down for the evening’s program, “21st Century Choreographers,” a mixed bill that included a new work by Kyle Abraham, his first for the Royal Ballet.

Abraham, one of the few Black choreographers to be commissioned by the Royal Ballet, has shown his wide-ranging curiosity about working in different modes and tones over the last few years. His new dance, “Optional Family: A Divertissement,” is entirely unlike his work for his own company, A.I.M., or his two pieces for the New York City Ballet — the inventive, glamorous “The Runaway” (2018) or the recent spare and serene “When We Fell,” a filmed dance.

He is right to call “Optional Family” a divertissement: The 10-minute work for three dancers is amusing, well crafted and intriguing. But it also feels incomplete, like an idea for something bigger. (Perhaps it is; he has been commissioned to create an ensemble work for the Royal Ballet in spring 2022.) 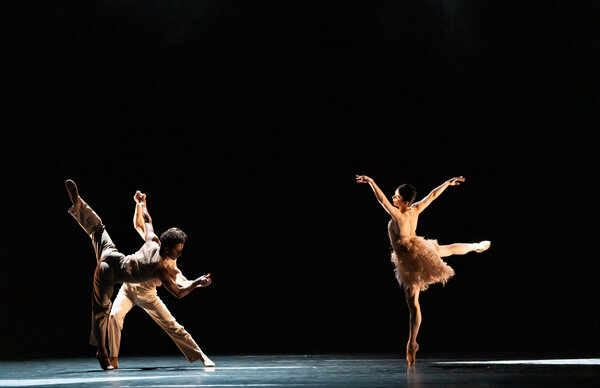 The piece opens with a voice-over (the text was written by Abraham) offering a viciously polite, very funny ode to the horrors of marriage and perhaps an allusion to lockdown close quarters. (“To be without you would be pure and utter bliss.”) The curtain opens on Natalia Osipova, whirling in a virtuosic sequence of turns around the stage to the suspenseful, jerky, percussive spills of Nídia Borges’s “Intro” as Marcelino Sambé watches. Diamonds of light fragment the stage, creating isolated pods for the dancers, who keep intersecting and peeling apart, the light fading as Osipova circles in Sambé’s arms.

When the lights come up again, a third figure, Stanislaw Wegrzyn, is crawling downstage on a diagonal, then propelling himself into an energetic series of jumps, feet crisscrossing, body angling. This man is the spoke in the wheel, the catalyst for change, discontent. Moving now to Grischa Lichtenberger’s “Kamilhan: Il y a Péril en la Demeure,” he dances with Osipova, sometimes with Sambé, their lines moving through balletic stretch, idiomatic, naturalistic gesture and a more contemporary weightedness.

Abraham makes more interesting use of the men, in knotty complex formations and off-kilter partnering, than of Osipova, who spends a lot of time doing fast turns around the stage. Perhaps her exclusion is the point, but it seems that nothing is meant to be clear. “Optional Family” feels paradoxically lightweight and intriguing, a piece you immediately want to see again to try to work it out.

It came after Christopher Wheeldon’s “Within the Golden Hour” (2008), a joy of a ballet set to a selection of melodic string music by Ezio Bosso and Vivaldi. The piece, costumed by Jasper Conran and dramatically lighted by Peter Mumford, is a visual delight, but also meticulously crafted.

Wheeldon weaves three very different male-female pas de deux amid an ensemble and other smaller groupings with marvelous invention. Somehow he evokes the natural world as well as the human one, the dancers sometimes arching their backs with bent knees or slinking across the floor with feline grace; sometimes moving, flat-footed, to a simple waltz as if they were at a local dance. There are allusions to Indian dance too, in the delicately uplifted palms and undulations of a female quartet, and exhilarating, almost martial virtuosity in the opening male duet (the excellent Leo Dixon and David Yudes).

After the intermission, two pieces by Crystal Pite, both created for Nederlands Dans Theater and new to the Royal Ballet, offered more somber worlds. “The Statement” (2016) is a work for four dancers (Ashley Dean, Joseph Sissens, Kristen McNally, Calvin Richardson), set around a large, shiny table that seems to refer to the seminal Kurt Jooss ballet about war, “The Green Table.” To recorded dialogue by Jonathon Young, the dancers enact a confrontation about taking responsibility for a conflict that has apparently spiraled out of control.

The oblique Harold Pinter-like dialogue about escalating warfare (“They’re expecting the truth.” “What is that?”) could as easily be about the current conflict in Israel, as any other. The dancers embody the words with exaggerated gestures, bodies recoiling and lurching, sliding over and under the table, the nexus of power constantly shifting. The thrillingly precise choreography powerfully suggests the emotions and thoughts behind the ambiguous verbal dueling; it’s a suspenseful, theatrical tour de force.

The 2012 “Solo Echo,” set to Brahms and inspired by a Mark Strand poem, “Lines for Winter,” offers seven dancers a melancholy journey through a frosty world. With its falling snow backdrop and pearly lighting, “Solo Echo” is atmospheric and skilfully constructed. But like many of Pite’s works, it strikes a serious single note for so long, that it begins to blur into a generalized melancholy impression.

If the Royal Ballet’s opening program was more somber than not, English National Ballet offered a contrastingly lightweight and upbeat program the evening before at Sadler’s Wells. Five short ballets — by Yuri Possokhov, Sidi Larbi Cherkaoui, Stina Quagebeur, Russell Maliphant and Arielle Smith — all originally created for film during lockdown, were transposed to the stage, all to much better effect.

It wasn’t an evening of much choreographic substance, but you couldn’t fault the dancers’ technical mastery and evident joy at being back onstage. The socially distanced audience responded in kind, whooping and cheering. “I’ve booked for everything,” the man behind me told his companion. Fingers crossed.