Until a few weeks ago, I never listened to podcasts. I haven’t listened to the radio since my preteen Radio Disney years. I’m not even a big fan of music — I turn to the same small playlist of songs, but even then, more than anything, I’m a fan of silence.

So my sudden embrace of audio plays this winter came as a surprise. And I have the sometimes hilarious, often affecting and always refined productions from the radio and podcast series “Playing on Air” to thank for my new favorite form of pandemic-time entertainment.

Though I’d encountered radio plays before, I embraced the form in earnest this Thanksgiving, as I tried to figure out some fresh way to distract myself during cold-weather runs. It was perfect timing — despite the advances we’ve seen in Zoom theater since the spring, these short productions felt more connected to the soul of the art form, delivering the most concentrated essence of what I love in theater.

The Public Theater and the Williamstown Theater Festival are among many entities now producing audio plays — some written by award-winning dramatists and performed by Broadway and Hollywood notables — given the current strictures on in-person shows.

“Playing on Air,” founded by the theater producer Claudia Catania, has been chugging along. Browsing through the selection feels like diving to a treasure chest and picking out whatever jewel suits your fancy for that day: an elegant 11-minute pearl of a drama like Lucas Hnath’s “The Courtship of Anna Nicole Smith”; a sparkling amethyst comedy like David Lindsay-Abaire’s “Crazy Eights”; or a gait-stopping onyx Black Lives Matter tragedy like “Jezelle the Gazelle” by Dominique Morisseau.

Rosie Perez, John Leguizamo and Bobby Cannavale star in Lindsay-Abaire’s play, and they are hardly the only familiar names involved, from Marisa Tomei to Michelle Williams, Heidi Schreck to Lynn Nottage, and Daphne Rubin-Vega to Margo Martindale. (And for those who enjoy behind-the-scenes info, each episode ends with an interview with the cast, director and playwright.)

On my Turkey Day run, I listened to “Thanksgiving for One.” Written by and starring Hamish Linklater alongside Jean Smart, it’s a coy wordplay-heavy, fourth-wall-busting exchange between a waiter and a woman who is trying to enjoy a holiday dinner by herself. I laughed out loud into the cold air as Smart’s obstinate Marjorie Mumms, fed up with her waiter’s shenanigans, threatens to urinate in a potted plant, Justin Bieber-style. (Ruben Santiago-Hudson was the sharp director.)

A few weeks later, during Christmas break, I vacuumed while listening to Melis Aker’s “Scraps and Things,” about an elder seamstress (Carol Kane) and a young academic (Aker) who chat in a laundromat in Istanbul. When the play took a surprising turn, revealing how the two women are connected, I turned off the vacuum and stalled in the hallway, afraid I’d miss a word.

When we think of theater, we think visually, of the stage — before the pandemic hit, I know I certainly did. But audio plays emphasize two other invaluable elements: language and voice. 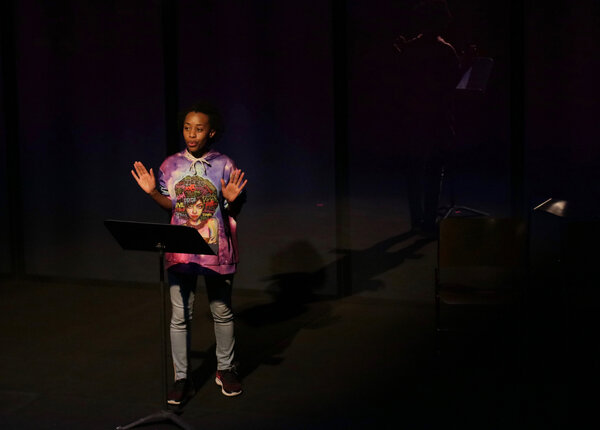 Sometimes stagecraft can be a guise, an outfit either at odds with the body that wears it or a garish distraction. Divorced from the stage, the text must speak on its own, and the language must be brawny, carrying a substantial sense of setting and tone.

The same goes for the actors. You know how the loss of one sense supposedly sharpens the others? Actors robbed of some of their most essential tools — expressions, body language, gestures — have to lean in to the particularities that come with vocal acting: modulating tone, nailing stresses and rhythms, capturing accents and pronunciations.

And my favorite audio plays have had directors who’ve proved to be technicians of silence, using moments of pause to speak as loudly as the dialogue. In Aker’s piece, it’s the silence of a young woman suddenly confronted by the talkative older woman doing her laundry nearby.

Hnath’s play — in which Anna Nicole Smith decides whether to embrace her quiet life or accept a billionaire’s proposal and the glamorous but tragic future that will come with it — turns on a pivotal moment: Smith dancing in a parking lot, silently but uninhibitedly, before her suitor J. Howard Marshall.

Of course we often witness silence on the stage, too, but there you can still see the actors reacting, moving. Silence, and sound, in an audio play is inevitably much more intimate; the actors’ lips are near your ears, and you are invited to create the stage and the characters from that closeness. The experience is inherently personal and accessible — you can carry the theater with you wherever you go.

The bite-size offerings from “Playing on Air” in particular highlight how much ground a play can cover in just a few minutes. A production like Patricia Cotter’s “Wild and Precious Life” (which takes its title from a Mary Oliver poem) works like a sonnet: the truncated form demands an economy of language and swift turns like the final volta in the poem.

From those few minutes of sound, a whole world can open up. Even without a stage, that is theater: a performance that unlatches the mind. Go ahead, just listen.