Meghan Markle got back to her royal roots on Tuesday, joining a Zoom call with women from the Hubb Community Kitchen, the group she worked with for one of her first royal projects.

The organization was founded by women affected by the 2017 Grenfell Tower fire in London. The Duchess of Sussex secretly visited with the women for months, beginning in January 2018. In September of that year, Kensington Palace unveiled a cookbook collaboration with the group, called “Together: Our Community Kitchen,” for which Meghan wrote the forward.

On Tuesday, Meghan reunited with the women of Hubb Community Kitchen, who are joining forces with The Felix Project, a food waste redistribution charity, and the Evening Standard’s Food for London Now campaign, to distribute meals during the coronavirus pandemic.

“The spirit of the Hubb Community Kitchen has always been one of caring, giving back, and helping those in need, initially in Grenfell and now throughout the UK,” Meghan said in a statement, shared with HuffPost. “A home cooked meal from one neighbor to another, when they need it most, is what community is all about.”

The women will make the meals at home (in order to follow social distancing protocol) and then Street Games, another charity the Sussexes have worked with, will gather and drop off the meals. They expect to produce upwards of 250-300 meals three times a week in London.

“I’m so proud of the women of the Hubb Community Kitchen, and the continued support the Felix Project gives them to carry out these acts of goodwill, which at this moment in time are urgently needed,” the duchess said in her statement, adding that she was “equally moved” by the Evening Standard’s new campaign.

During the call with the women, Meghan mentioned the success of the group’s cookbook.

“What was so great is you look back at that first day and then however many visits later and going, ‘Yeah, we’re just going to make a cookbook’ and not knowing what a huge success it was going to be,” the duchess said with a smile as the women nodded. “And that’s a testament to you where I felt ― again ― it’s inspired so many people.” 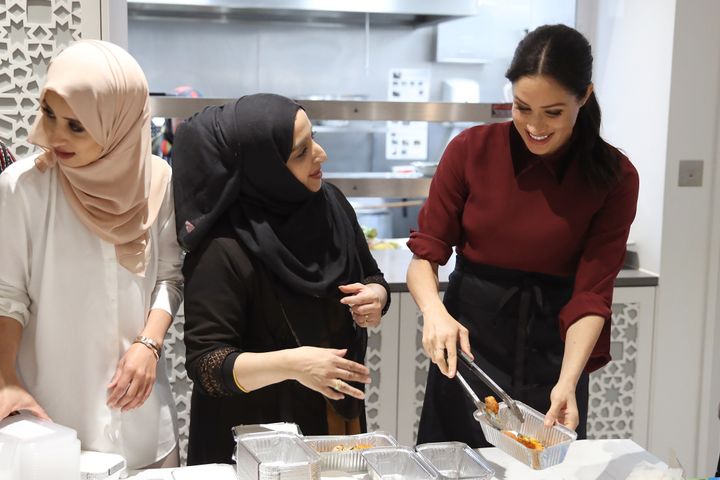 The Duke and Duchess of Sussex recently distributed meals for Project Angel Food, a nonprofit charity based in Los Angeles that prepares and brings food to people with AIDS and other critical illnesses.

Richard Ayoub, Project Angel Food’s executive director, told HuffPost Thursday that the royals “have quietly been delivering for us for a couple of days and they reached 20 different households.”

″[Harry and Meghan’s] whole goal in volunteering was just to pay tribute to our chef, staff and volunteers and just to ease the workload of our drivers,” Ayoub said added. “They just took some of that load off … and hopefully put a smile on people’s faces.”

Subscribe to HuffPost’s Watching the Royals newsletter for all things Windsor (and beyond).