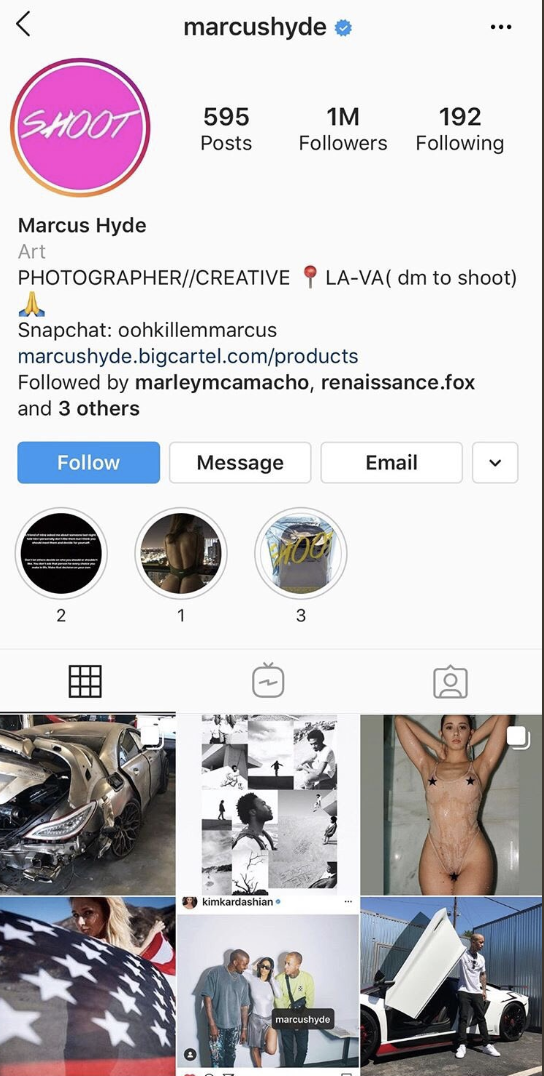 Instagram has disabled the accounts of celebrity photographer Marcus Hyde as he continues to face allegations of predatory behavior and sexual misconduct.

Hyde, who is close to Kanye West and Kim Kardashian West and has worked with other artists like Chance the Rapper and Ariana Grande, made his main account, which has more than one million followers, private on Sunday after Sunnaya Nash published their direct message exchange in which he tried to bribe her with a free photoshoot in exchange for nudes, sparking outcry. Many other women have since shared their own creepy and inappropriate experiences with the photographer.

On Wednesday, after reviewing his main account, a spokesperson for Facebook, which owns Instagram, told BuzzFeed News that Hyde’s profile had been disabled “for violating our sexual solicitation policies.” When asked about Hyde’s second Instagram profile, which has nearly 18,000 followers, the social media giant said that @marcushyde_2 had also broken their rules.

Facebook says it “draws the line” when “content facilitates, encourages or coordinates sexual encounters between adults.” The social media giant said it also “restricts sexually explicit language that may lead to solicitation” because it could upset “some audiences within our global community.”

On Sunday, Hyde posted a photo of a woman in a shower wearing a see-through bodysuit with stars over her genitals and nipples. Nash a Los Angeles-based model and interior design student, responded, expressing interest in shooting with the famous photographer.

“Directly after that, he asked for nudes,” the 20-year-old told BuzzFeed News.

When she said she didn’t have nude photos, but was comfortable with shooting lingerie and partial nudity, he immediately replied that the shoot would cost her $2,000. Not really having that kind of money, Nash agreed to a nude shoot, but didn’t want to send him naked photos beforehand. He again took the free session off the table and told her “gotta see if you’re worth it” when she asked if the reason was because she wouldn’t send him the photos.

The exchange has since gone viral and unleashed a torrent of other allegations about Hyde, who has not returned multiple requests for comment.

However, users were quick to share screenshots of Hyde’s now-private account, noting that the number of posts kept diminishing, suggesting that he was deleting suggestive or potentially inappropriate photos.

On Sunday evening, his post count was 590. According to a screenshot that Nash gave BuzzFeed News that was taken on Tuesday, that number had dropped to 391.

Concurrently, as her exchange with Hyde began to erupt across Instagram, the model encountered her own issues with the platform.

Hours after she posted the dm conversation to her story, followed with other messages and accounts from models, Instagram removed her story for “bullying or harassment.” Her post with the dm’s, which had more than 40,000 likes at the time, was also deleted before she was notified that her entire account may be taken offline for continuing to post content that violated their community guidelines on “nudity or sexual activity” and “bullying or harassment.”

Nash then took to Twitter to share messages from other women who said Hyde also tried to bribe them to send nude photos, along with other allegations of sexual misconduct and inappropriate behavior.

When BuzzFeed News inquired about the threats on Tuesday, a Facebook spokesperson said that the content “was removed in error and has been reinstated. We apologize to Sunnaya for the mistake.”

However, later that night, Instagram again removed Nash’s original post, only to reinstate it Wednesday afternoon. Nearly 50,000 accounts have liked it.

The model says it’s been frustrating dealing with “Instagram’s censorship.”

“There’s a lot of anxiety of my account being deleted wrongly,” she told BuzzFeed News. “It’s made me feel silenced and like I am unable to share these stories of injustice.”

However, she said that she will continue to share other women’s accounts and is grateful that the platform has allowed her to reach so many.

“I only expected a few friends to reply [to my story] and was shocked at how quickly people were to share and repost,” Nash said. “That started the flooding of messages I received from other girls coming out that Marcus Hyde had abused them during shoots. I asked them if I could share their stories, and I’m so glad I did.”