At the start of the new documentary “Linda Ronstadt: The Sound of My Voice,” the 10-time Grammy winner talks about why people sing. “For the same reasons birds do,” she says. “For a mate, to claim their territory or simply to give voice to being alive in the midst of a beautiful day. They sing so that coming generations won’t forget what the current generation endured, or dreamed, or delighted in.”

The decision to document the specific struggles, hopes and pleasures Ronstadt expressed throughout her more than 40-year career has special significance given her experience with Parkinson’s disease, which robbed her of the ability to sing nearly a decade ago. In the time since, various documentarians have approached about preserving her legacy on film. She rebuffed them all before relenting to the Academy Award-winning directorial team of Rob Epstein and Jeffrey Friedman.

“They wrote a letter that was so literate,” Ronstadt said during a phone interview from her home in the Bay Area. “And I had seen the documentary they made about Harvey Milk and thought it was very respectful,” she added, referring to the “The Times of Harvey Milk,” from 1984.” “So, I thought, if somebody’s going to do it, it might as well be them.”

The ambivalence embedded in that last remark has everything to do with how the 73-year-old Ronstadt views her life now. “I see myself as retired,” she said. “It’s weird having a current project — especially one that I didn’t control.”

And control is important for Ronstadt. It’s what allowed her to break as many rules of pop stardom as she did, when she did. At the same time, she’s self-deprecating about her achievements. In an hourlong conversation, she breezily dismissed her abilities at vocal phrasing, critiqued her multimillion-selling versions of the American standards and made sure to mention the singers she believes sang the Mexican songs she loved as a child with far more skill than she did.

Ronstadt even seemed nonplused about the Kennedy Center Honor she will receive in Washington in December. “That’s weird, too,” she said, adding that she will show up to accept it, in part, because she was told Trump wouldn’t attend. “I don’t think anybody would show up” if he was going, she said. (The president has not yet announced whether he will go this year.)

Though Ronstadt admits that, some days, her health makes it hard for her to articulate clearly, the day we spoke she sounded robust. These are edited excerpts from the conversation.

In the past, you have spoken about the great influence of your father’s singing. The film lets us finally hear him. He performed locally, but did he ever record professionally?

No. I tried to record him once but he got red light fever. His voice sounds like a cross between Pedro Infante and Frank Sinatra. Most of the songs I learned in Spanish as a kid. I had never heard the records. I just heard my dad sing them.

Your Mexican background was an issue for you at school. In the film, you say that children would be scolded for speaking Spanish.

My best friend Patty’s sister had darker skin, and she was forbidden from going into the public swimming pool. We were outraged. Arizona was pretty racist. I think it’s gotten worse.

From Arizona, you went to Los Angeles, where you had your first hit in 1967 with “Different Drum.” That’s a stereotype-breaking song for a woman to sing: The character is a rambler who can’t be tamed. Were you that person back then?

That’s me! I thought I was too young for marriage or anything resembling it. And I continued to feel that way until I had children of my own. Having children makes you grow up.

But you adopted those children on your own. And you’ve chosen never to marry.

Right. I didn’t need somebody else’s opinion about how to raise my children. It’s hard enough being with my own opinion. 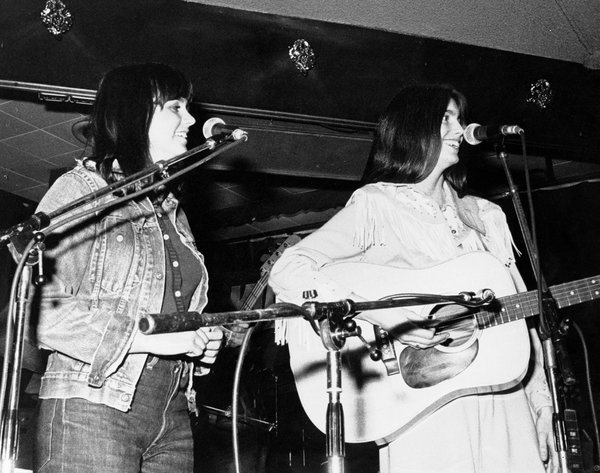 An interesting pattern developed early in your career: You met a lot of talented women, like Emmylou Harris and Karla Bonoff, but instead of feeling competitive, you collaborated with them.

I’ve never seen music as a competition. It’s a conspiracy. The word “conspiros,” from the Greek, means to breath together. José Abreu, who was so successful at teaching children how to play music in Venezuela, said, music is a conspiracy to commit beauty. If I sing with Emmy, I’m trying to ride right on her, to follow her shape exactly by singing harmony. We lean in and breathe the same air and tell our truth.

The specific scene you rose from in L.A. was dominated by singer-songwriters. But you only sang. Did you feel self-conscious about that?

The world was full of so many good writers, and I liked the idea that I could interpret somebody else’s song. If a song told my story, I wanted to sing it.

Jackson Browne called you an auteur of those songs because you made them your own.

It was probably my inept phrasing. It wasn’t until 1980 that I had a clue about phrasing. And I’m still pretty clueless about it. Bonnie Raitt can sing like nothing is going to bother her. I can’t sound like that.

Many people in the film talk about how critical you are of your recorded performances. What’s up with that?

It’s funny to hear recorded music because it’s frozen in time. And I experience those songs as something fluid. I did all those early recordings live. There was no overdubbing. And we picked the track that was best for the band, not for my voice necessarily. Then I’d get onstage, and that’s when I’d get really comfortable with it. The ones I recorded all sound rigid to me. I’d think, “I sang that better in Cleveland on February the 6th!”

The rock ’n’ roll world that you came from fostered attitudes about sexual conduct that have come under new scrutiny in the wake of #MeToo. Did you experience sexual harassment back then?

[Bursts out laughing] I felt sexually harassed a lot of times. There was a guy on “The Johnny Cash Show” that came into my hotel room and took his clothes off. I scooted away and sat in the lobby until he left. He said, “If you play nice with me, I’ll make sure you get more TV shows from this.” But I hated performing on television! So, he had nothing to offer me! If I had been in a position where I was beholden to him, it would have been a different story.

At the height of your career, in the ’70s, you were seen as a sex symbol. Did you feel pressure to live up to that image?

I couldn’t! [Laughs] I’m a casual dresser, to say the least. It’s hard for me to go beyond Levi’s and a baggy sweater. I always look like I’m going to clean somebody’s house.

But there was that famous 1976 Rolling Stone cover where you’re in red lingerie with one strap undone. In Joe Hagan’s book about the magazine’s founder, Jann S. Wenner, he reports that Wenner told the photographer Annie Leibovitz to make you look like “a Tijuana whore.”

She had an agenda. I was naïve. I said, “I don’t wear red underwear.” She said, “I’ll let you see the pictures before we put them out.” Sure enough, she brought the pictures over to [Ronstadt’s producer and manager] Peter Asher’s house, and we said, “No, you can’t use that.” She said, “Well, I just said I’d let you see them. I didn’t say I’d let you choose them.” That was really upsetting.

[In an email response, Leibovitz called Ronstadt “anything but naïve,” adding that Wenner gave her no direction for the shoot. Leibovitz wrote that Asher was the one who didn’t want the pictures to run, but that, privately, Ronstadt “told me to run them.”]

At your commercial peak, you were called “the queen of rock ’n’ roll.” But you weren’t really a rock singer, right?

Never! I’ve always thought of myself as a ballad singer. I couldn’t do anything nuanced or delicate [in rock ’n’ roll].

You started to perform standards in 1983, well before that became a bankable trend. How much resistance did you face at first?

Oh my God! The president of my record company came over to my house and said, “You’re going to destroy your career.” I couldn’t even hear him. I wanted to sing those songs so bad, I think I would have died if I didn’t. But I didn’t do them all that well. I never sang with an orchestra before. I could have done much better if I’d had it on the road first.

It’s even more amazing that you sold millions by recording traditional Mexican songs. Yet when critics talk about the pop artists who brought music from outside the U.S. or U.K. to the pop mainstream, they mention Paul Simon and Peter Gabriel, not you. Is that frustrating?

Who cares? My music is not curing cancer. It will be gone soon enough. There are better interpreters I can recommend, like Lola Beltrán, Lydia Mendoza and Chavela Vargas.

Before you released the Mexican songs, a lot of people didn’t know your background. Were they not paying attention?

I only said it in every interview. In 1968, I said I’m of Mexican-German heritage. But I had white skin and a German name so I wasn’t Mexican. It was part of the way Mexicans are treated in this culture. We’re invisible.

Obviously, singing was your passion since childhood. Where does that passion live now?

I listen to music really passionately. I can really hear music in greater detail. I listen to opera on YouTube, where you get bad picture and sound. But I can see Anna Netrebko sing “La Traviata” and then see Maria Callas sing it and then someone else.

There’s a coup in the film where we get to hear you sing a bit with members of your family.

There’s no way I could have them sing and not have me sing harmony. It was what my family did. It’s always important to add to a song whatever you can.