“That would be an awful way to find out they’d lost their jobs as … handbag blondeface? Haunted scarecrow? His-and-hers towel racks?” Stephen Colbert joked. 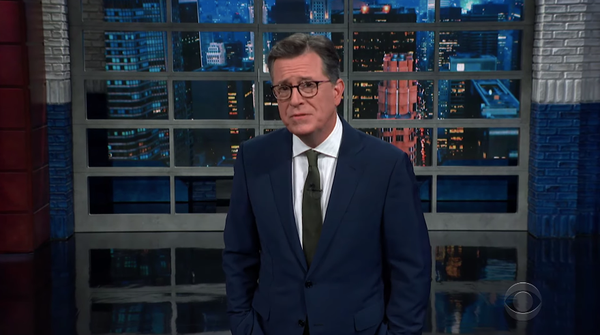 Welcome to Best of Late Night, a rundown of the previous night’s highlights that lets you sleep — and lets us get paid to watch comedy. Here are the 50 best movies on Netflix right now.

“That would be an awful way to find out they’d lost their jobs as … handbag blondeface? Haunted scarecrow? His-and-hers towel racks?” Stephen Colbert joked on Wednesday. “I don’t know what they did.”

“In the end, the ex-president did what he’d done his whole life: He avoided his children. He never fired them, and as we all know, Jared went on to achieve Middle East peace.” — STEPHEN COLBERT

“He was going to fire them over Twitter, but his chief of staff, John Kelly, was able to stop him from doing it by waving a KFC drumstick in front of him and tossing it across the room.” — JIMMY KIMMEL

“Meanwhile, Eric and Don Jr. were like, ‘Wait a minute, he follows you guys on Twitter?’” — JIMMY FALLON

“Last night at a concert in D.C., Lizzo played a never-used crystal flute that once belonged to President James Madison. No one had played it in 200 years, so it was ‘about damn time.’” — JIMMY FALLON, referencing Lizzo’s single “About Damn Time”

“Yeah. That’s a really cool way to bring attention to American history. Yeah, because now students will know that James Madison was that guy who did a collab with Lizzo, you know?” — TREVOR NOAH

“It was an amazing moment — even better than that time Guy Fieri ate chicken wings with George Washington’s wooden teeth.” — JAMES CORDEN

The Bits Worth Watching

What We’re Excited About on Thursday Night

Also, Check This Out

Stream “Schitt’s Creek,” “8 Mile” and “Ferris Bueller’s Day Off” before they leave Netflix in October.