Friday morning started with a Kardashian-Jenner buzz after Caitlyn Jenner, hot on the campaign trail in her run for governor of California, let it slip that she was expecting her 19th grandchild. Who in the family was pregnant? Well, it turns out that the answer wasn’t Kylie because Caitlyn didn’t know about it yet. The answer was actually her son, Burt Jenner and his girlfriend, Valerie Patalo, expecting their third child, per Page Six. And then the news dropped that Kylie Jenner was pregnant, too. So get ready for that 20th grandchild, Caitlyn. 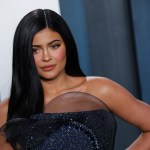 The Kylie Cosmetics founder pregnancy news was confirmed by Page Six, and yes, rapper Travis Scott is the father. They already share a three-year-old daughter (and internet sensation), Stormi, so this will be their second child together. Kylie has always been open about wanting more kids telling Harper’s Bazaar in February 2020 that she was open to the idea, but she wasn’t actively trying. ‘My friends all pressure me about it… They love Stormi,” she shared. “I definitely feel pressure to give her a sibling, but there’s no plan.” After a reconciliation with Scott in June, it looks like she was ready to add to her family.

In keeping with Kardashian-Jenner tradition, she is making sure her children have the same father. That’s exactly the strategy big sisters Kourtney Kardashian, Kim Kardashian and Khloé Kardashian (who might even try for a second child with ex Tristan Thompson) have followed. And while Kylie and Scott haven’t officially confirmed the news, it seems like every source in town is talking and, according to TMZ, she is in the “very early stages” of her pregnancy.

We are sure more information will soon leak out, but we also expect Kylie to keep her pregnancy as far out of the limelight as possible — just like she did with Stormi. As she told Andy Cohen during the Keeping Up with the Kardashians reunion, via Page Six, “it was just something that I needed to go through by myself.” Kylie is allowed to do her pregnancy any way she likes because she doesn’t owe us anything.

Before you go, click here to see which celebrity kids lost their parents too soon.