Kenneth Anand didn’t know he wanted to become a “sneaker lawyer” when he was growing up in Montclair, New Jersey in the late ’80s and early ’90s. He just knew that he loved sneakers — specifically Air Jordans — and everything that surrounded them: sports, street fashion and hip-hop. Of course, a lot’s changed for Anand since his teenage years. He served as general counsel and head of business development for YEEZY from 2017 to 2019 and was John Geiger’s lead lawyer in the John Geiger Co. vs Nike lawsuit, which was recently settled. He’s also a co-founder of Sneaker Law and a co-author of a book of the same name that’s used in curriculums from Harvard to FIT.

Though all those milestones, one thing that hasn’t changed a bit is Anand’s love for sneakers. In conversation, his enthusiasm is palpable. “To this day, when I open a new pair of sneakers my inner kid still jumps out of his seat,” he tells Hypebeast. Among all those sneakers, the pair that’s closest to his heart is the Air Jordan 5, specifically the “Grape” colorway as it was the first pair of Air Jordans he ever owned. For his installment of Sole Mates, Kenneth Anand reminisces on his first pair of Jordans, balancing his passion and profession and shares what he thinks most people don’t know (but should) about the sneaker industry. 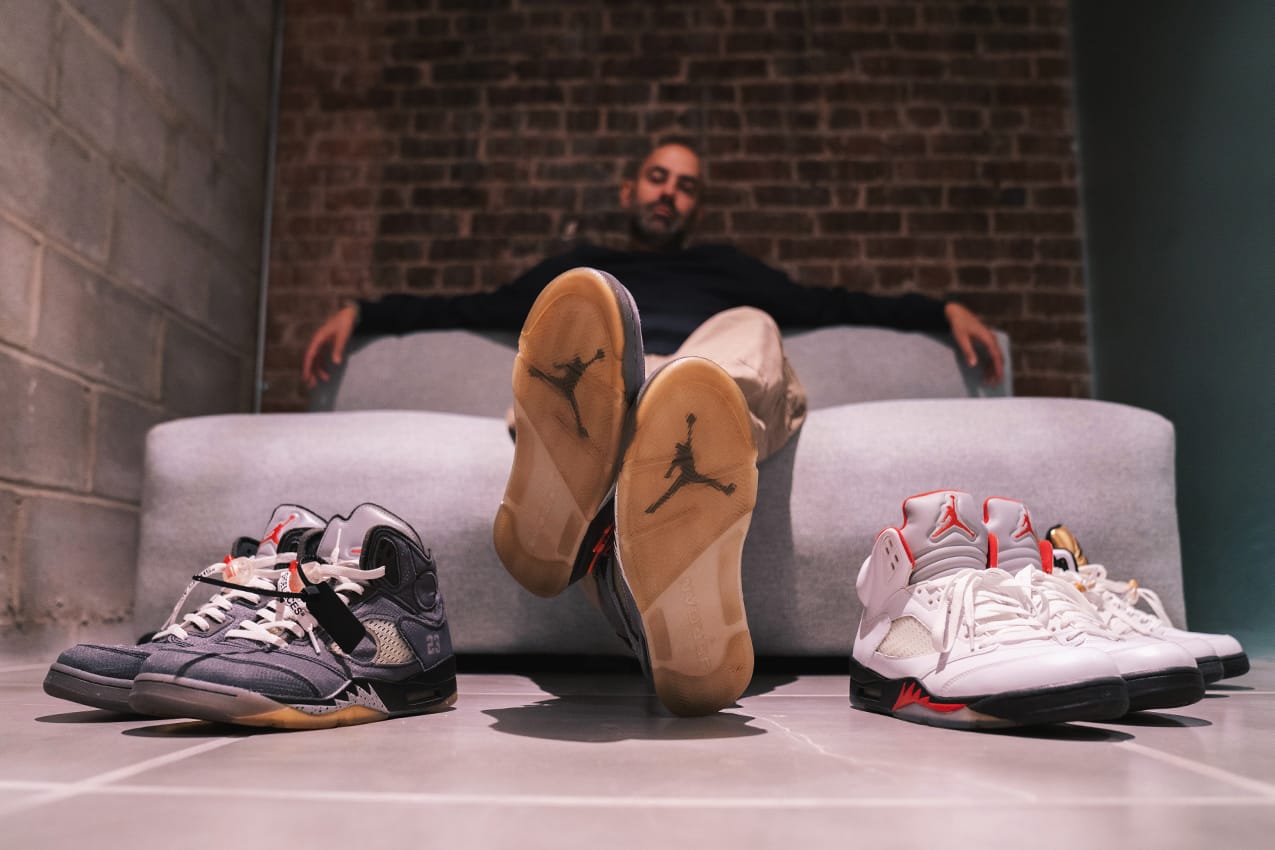 What got you into sneakers?

My sneaker journey started in the late ‘80s and early ‘90s. I loved hip-hop and really wanted the clothes and shoes that my favorite rappers were wearing on their album covers and in their music videos. Between the music, and, of course, Michael Jordan, I became really drawn to sneakers. I thought they’d make me look cooler, and the fact that shoes like Air Jordans were unobtainable because of their price point made me idolize them.

“Everyone thought you could run faster, jump higher and do everything in between when you had Jordans on.”

You grew up in Montclair, New Jersey, about an hour outside of NYC. What was sneaker “culture” like there? Were kids at your school into shoes?

Absolutely. Montclair was a very diverse town back then, so I was exposed to all kinds of different cultures and styles. One thing that everybody had in common, though, was that they loved sneakers, especially the latest Jordans. If you had an Air Jordan 3, Air Jordan 4 or Air Jordan 5, you were the man. Everyone thought you could run faster, jump higher and do everything in between when you had Jordans on.

Did your proximity to New York City play into your taste as well?

It was a key piece of my upbringing, for sure. My parents met at NYU and moved our family out to Jersey when I was young because living in Manhattan was, frankly, cost-prohibitive. They’d drag us into the city every other weekend to go to museums, art galleries, sporting events, whatever, and honestly, I’d usually dread it when I was younger, like “oh man, we’ve got to go into the city again.” I wasn’t old enough to realize that my parents were dope: they were super cultured and they wanted me to have a piece of that culture early on. Later, I realized that all of that fed into the same cultural ecosystem that sneakers did, and now I’m super thankful they brought me along.1 of 2 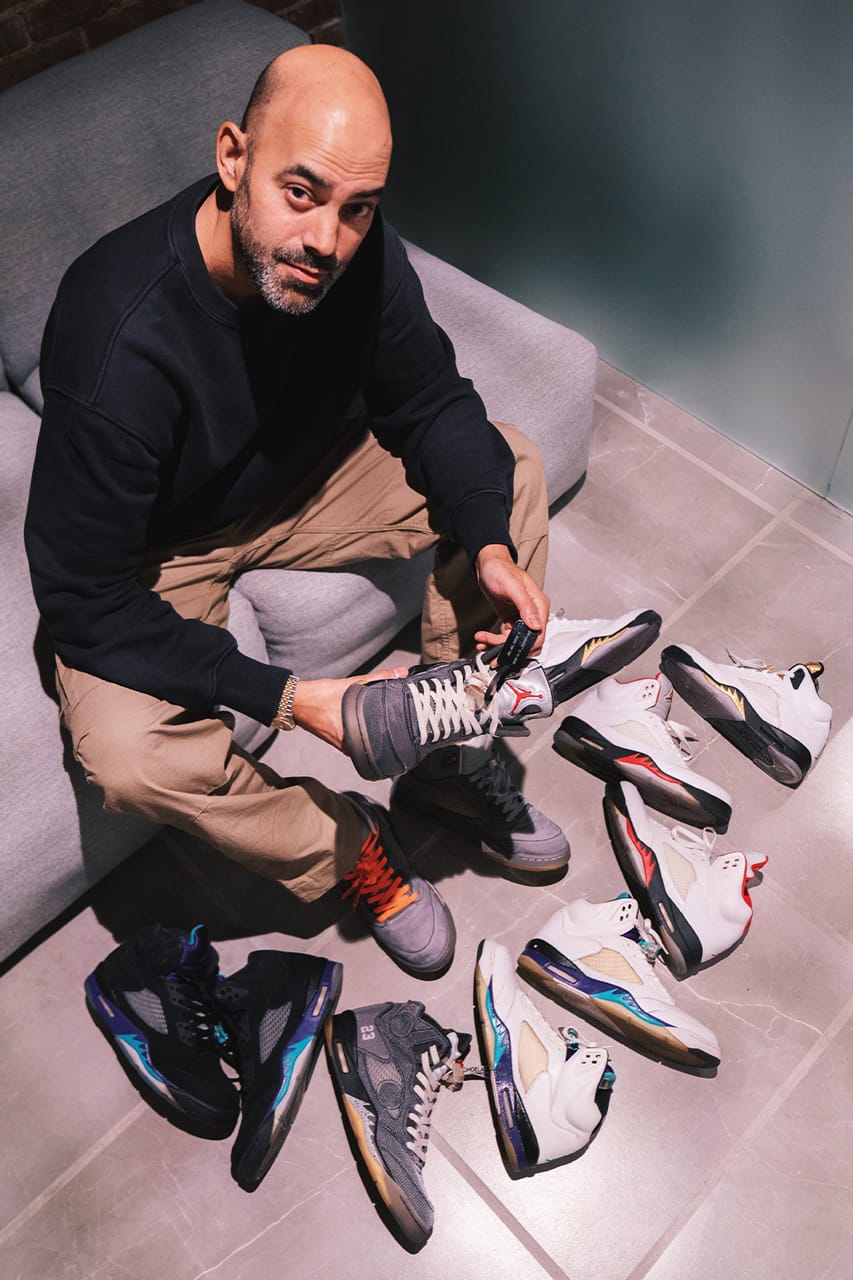 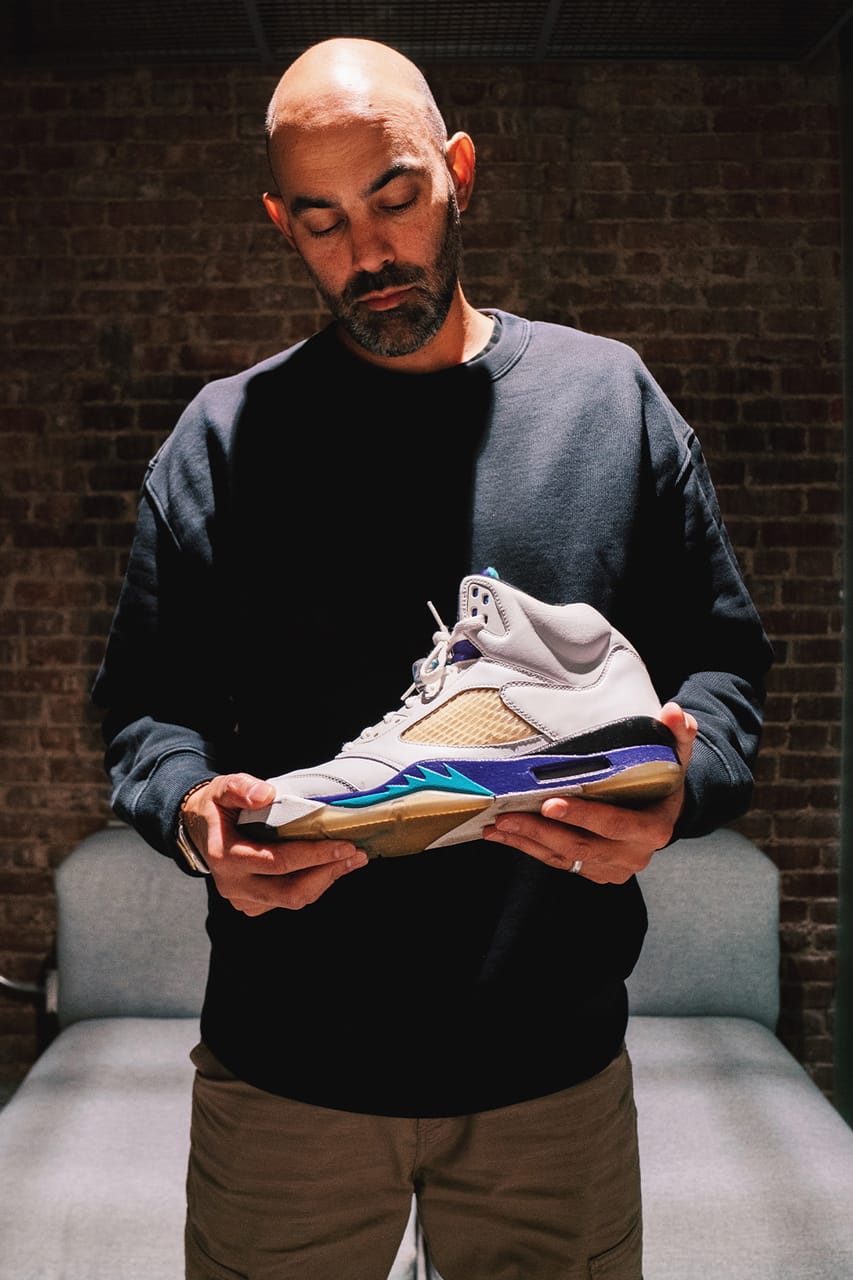 Do you remember the first time that shoes felt like more than just shoes to you?

When I had my first pair of Chuck Taylors in middle school. They were cheap and attainable but still cool, and really gave you a chance to express yourself by changing the laces or doodling on them with markers. After that, I had a bunch of Nikes, various Forces and Flights. I loved those, but everything changed for me when I finally got my first pair of Air Jordans.

And that was the Air Jordan 5, the subject of your installment of Sole Mates.

Yes, it was. I’d been begging my parents for Jordans for years, but they didn’t understand the point of spending so much money on a single pair of shoes. I finally convinced them in the summer of 1990, and I remember it like it was yesterday. I was up at summer camp in Maine, and my parents came to visit. We went to a shopping center nearby, and they had the Air Jordan 5 “Grape” on the shelf, with the whole matching jumpsuit and a giant poster of Michael Jordan behind them. 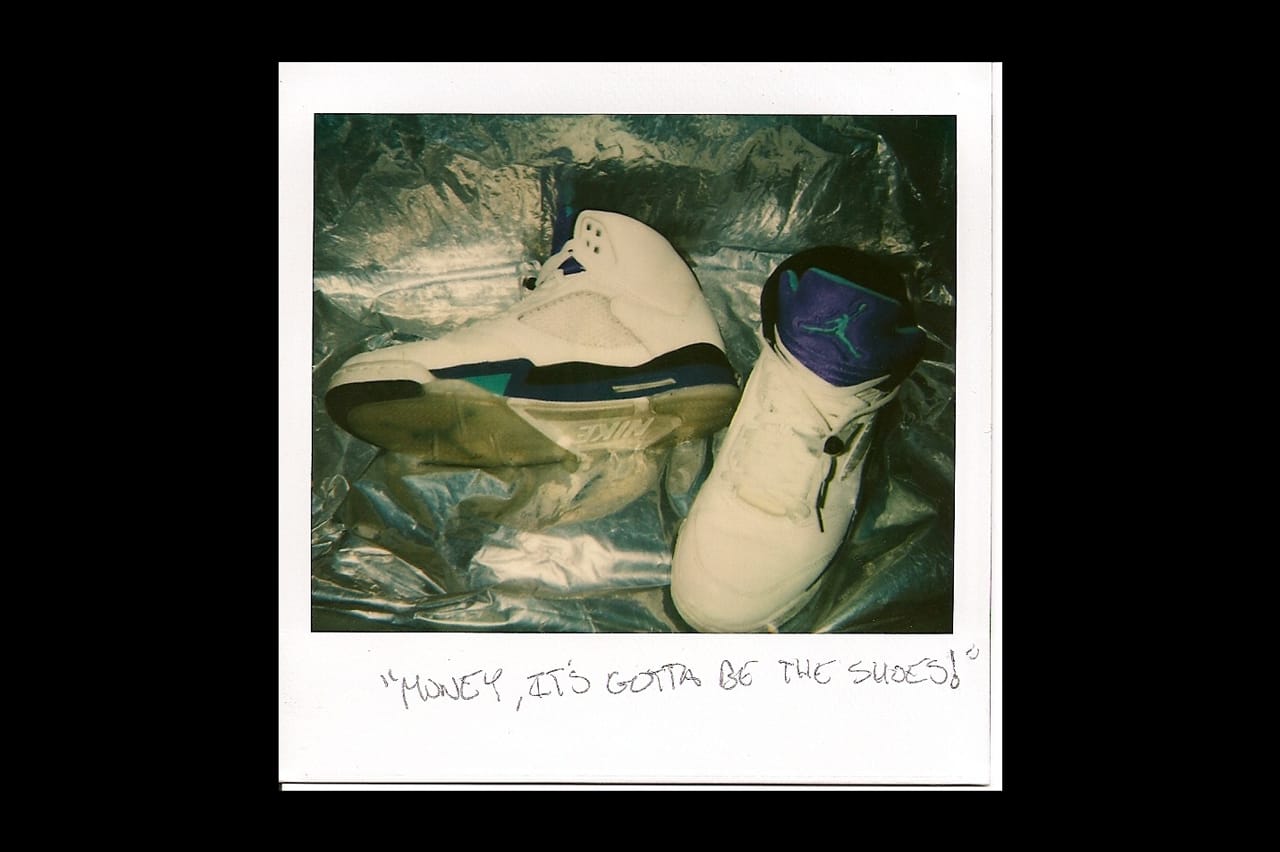 I didn’t want to leave the store. I begged and pleaded and eventually they gave in. I took them out of the store and was like “can I bring these back to camp?” They were like “no way, you’re holding on to those until the first day of school.” I took a Polaroid photo of them [Editor’s Note: Shown above], which I still have, and waited out the rest of the summer. I finally rocked ‘em for real the first day of 10th grade and it was glorious. Interestingly enough, my pair came with this reflective Mylar-style paper and most of the other OGs I’ve seen had black wax paper.

What drew you to the “Grape” instead of a more low-key colorway like the “Fire Red” or “Black Metallic?”

Will Smith wearing them in The Fresh Prince of Bel-Air helped, but at heart, I’m a colorful guy! I made my parents buy me matching aqua Champion shorts and a grape Champion hoodie, then when it came time to get a winter jacket I made sure to grab a Columbia Bugaboo that was the same color so I could wear my “Grape” year-round. I’ve been unafraid of loud colors since then, and I think that’s why the “Grape” has always had a place in my heart.

“You’ve got to have a certain vibe — and a very specific pair of pants or shorts — to pull the [Air Jordan 5] off.”

Do you like any of the latter “Grape” iterations like the “Black Grape” and “Fresh Prince,” or is it OG only for you?

I have the 2013 “Grape” retro. It’s a little heartbreaking that it doesn’t have the Nike Air hit on the back, but it’s not a deal-breaker. Though I think the inspiration behind the “Fresh Prince” pair is cool, I never really rocked my shoes without laces so they’re not for me. I’ve also got the “Fire Red,” the “Wolf Grey” and the Off-White™ x Air Jordan 5 in black. I appreciate that the Air Jordan 5 is’t a shoe that everyone flocks to like the Air Jordan 1, Air Jordan 3 or Air Jordan 4 — you’ve got to have a certain vibe and a very specific pair of pants to pull it off.

Did you know you were going to be able to weave your passion for sneakers into law when you first went to law school, or did you think you’d have to leave it behind?

I remember showing up for my first day of law school wearing a powder-blue Enyce tracksuit and having people look at me like I was an alien. This was in 1999, so aspiring lawyers wearing streetwear and sneakers was totally unheard of. I recall thinking “holy sh*t, this is a new world that doesn’t accept me for the way I am,” which was a lot different than being back home in Montclair. The vibe was “you’re a lawyer now, so look the part,” and I was dressing in suits, pocket squares, the like.

I was finally making some decent money when I started practicing law, so I was able to buy some of the shoes that I couldn’t afford as a kid, but eventually, I felt like I was disassociating. I’d come home and look at my shoes every day, thinking “man, I wish I could go back to that.” One day at work, I had an epiphany and was like “I should be doing more of what I love. Am I going to be doing this sh*t forever or do I want to take a chance on doing what I loved as a kid?”

“I know sometimes I might look like the old dude who’s rocking sneakers, but whatever: I’m making up for the time I lost putting in the work to become the lawyer I am today.”

How do you balance your passion for sneakers with your profession?

They’re one and the same now. You see my backdrop [gestures to the stacks of sneakers behind him] — that’s how I hop on every work call. I don’t hide from it anymore, which is very liberating. I’m immersed in sneakers on so many different levels, and I love it just as much as I always have. I know sometimes I might look like the old dude who’s rocking sneakers, but whatever: I’m making up for the time I lost putting in the work to become the lawyer I am today. And now I can use those skills in a new way, because in the past what “sneaker lawyers” did wasn’t really highlighted. 1 of 4 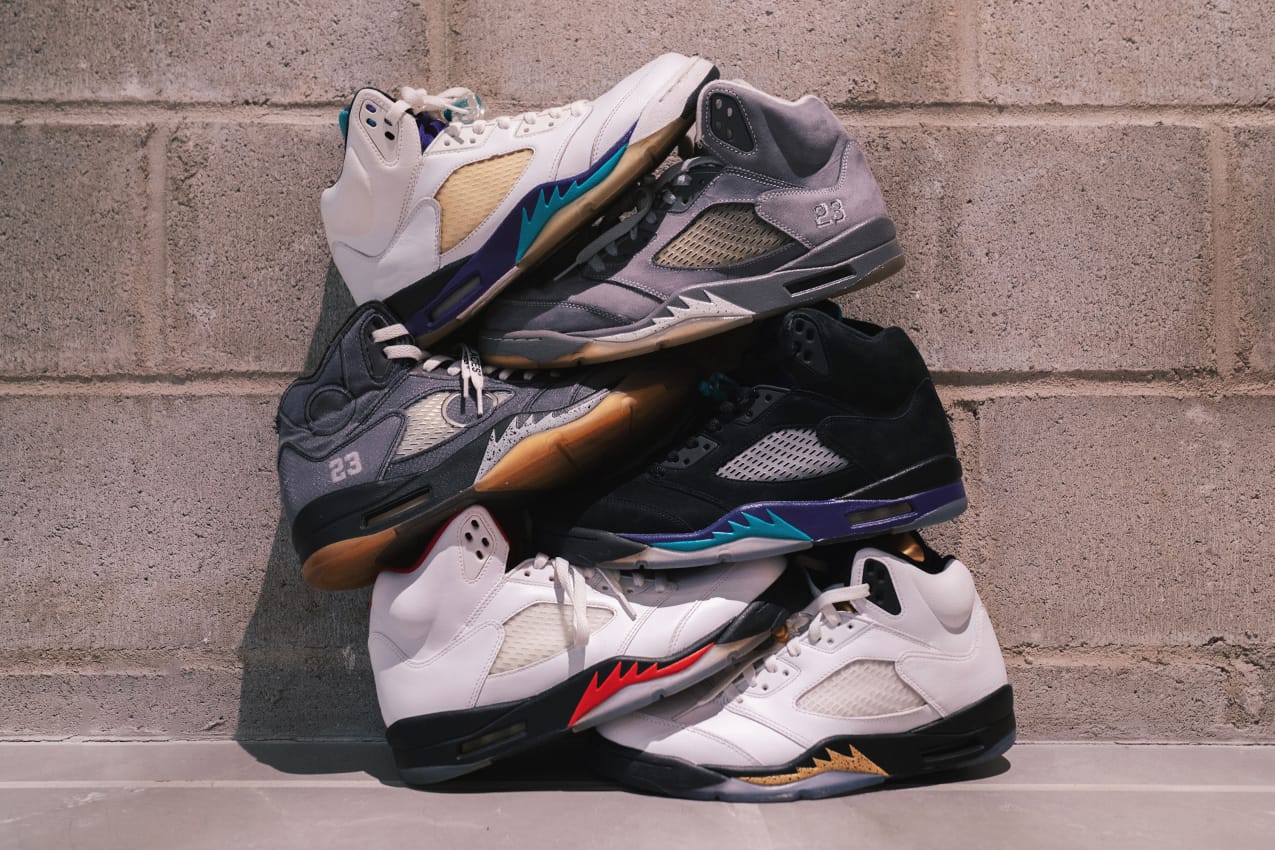 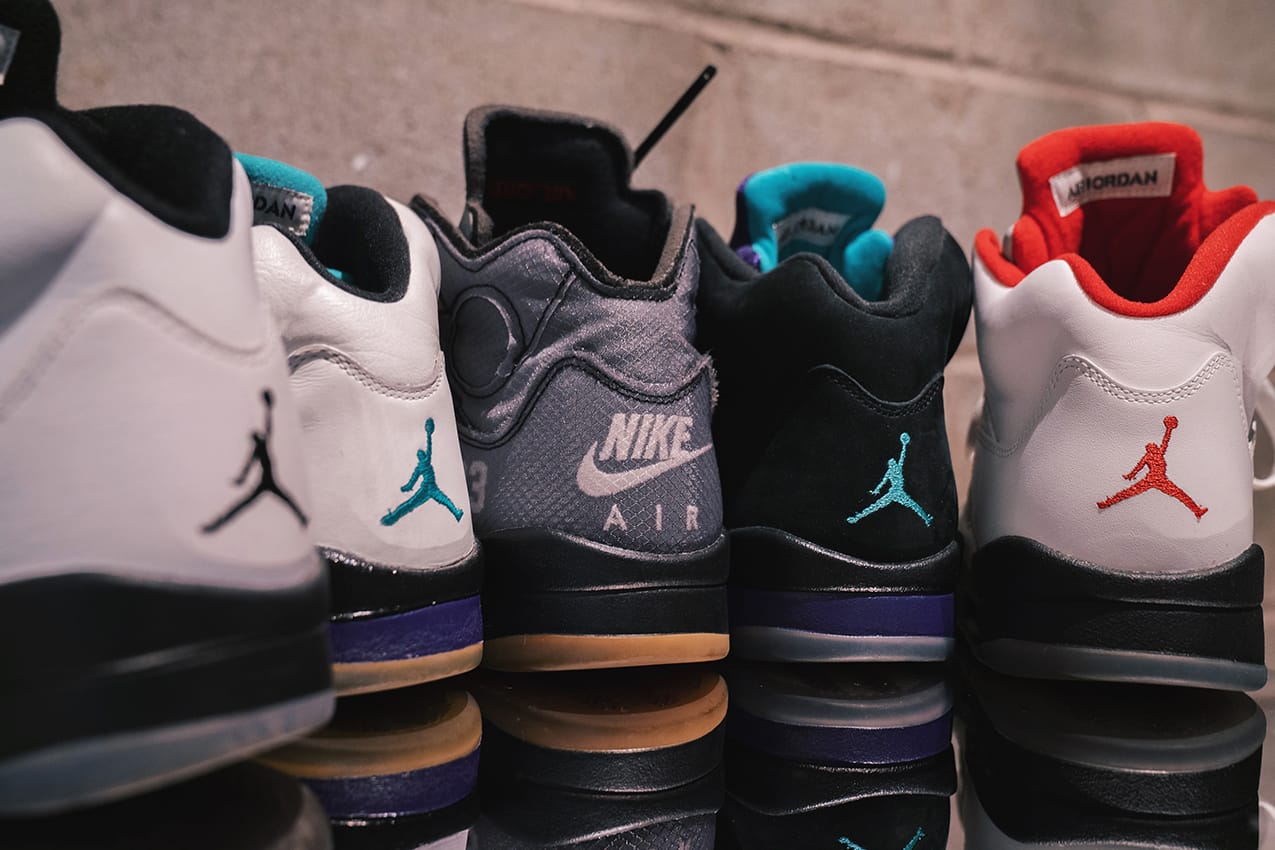 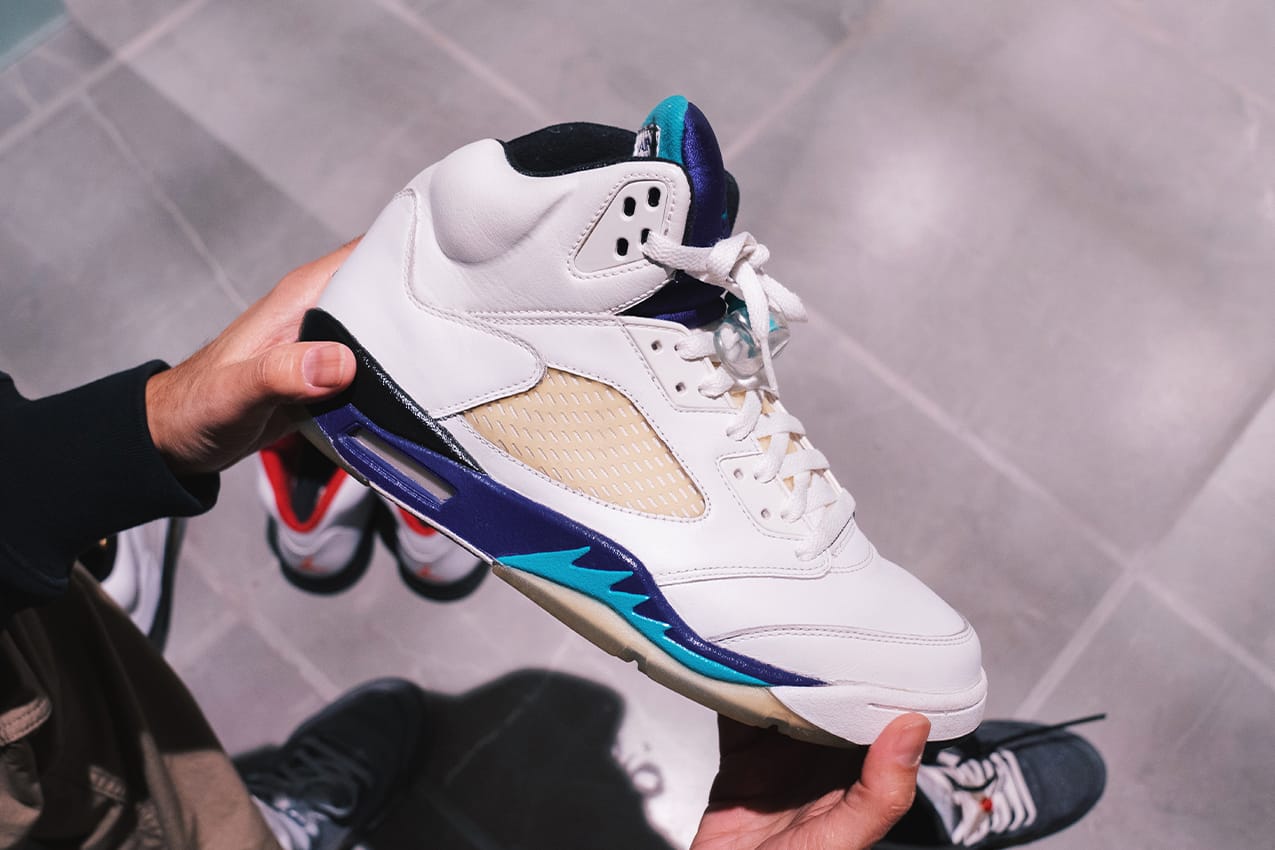 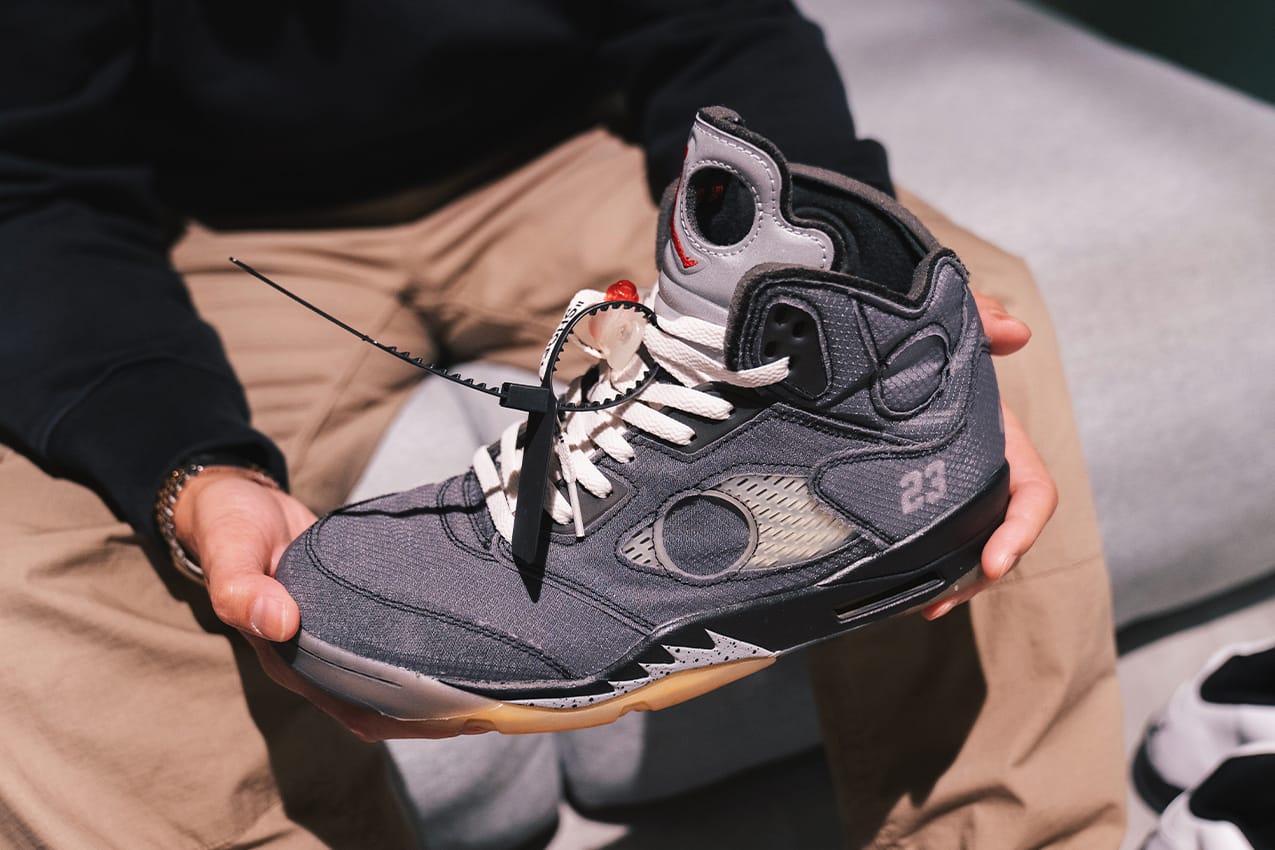 What in sneakers excites you these days?

The access to information about the industry. Jared [Goldstein, SneakerLaw business partner] and I set out to create Sneaker Law because we wanted to provide information to kids who didn’t know all these sneaker-related career possibilities existed. When I was younger, being into sneakers was like “I’ll buy these, rock them, match them with my outfits and maybe resell them,” but now you can learn about licensing deals, patents, trademarks and big business disputes. It’s awesome that there are younger people out there who are so excited by and educated on what the business of sneakers is about.

What’s something that most people don’t know about the business of sneakers that you think they should?

When someone who’s not up on the footwear industry hears what I do, they tend to chuckle, but they don’t realize that this is an $80 billion industry. I don’t think a lot of people realize that there’s a whole thriving industry behind these consumer goods and that there are many non-traditional ways to have a lucrative career in them.

“To this day, when I open a new pair of sneakers my inner kid still jumps out of his seat.”

Why are sneakers important to you?

They represent my childhood and my passions. To this day, when I open a new pair of sneakers my inner kid still jumps out of his seat. They’ve given me excitement, and energy, helped keep me young and put food on my table. I don’t know how you could find a better mix
Source: Read Full Article