If you purchase an independently reviewed product or service through a link on our website, SheKnows may receive an affiliate commission.

Even though there was a long mourning period for Queen Elizabeth II, the royals still had to embrace their new roles very quickly. With King Charles III’s immediate rise to the throne, Prince William and Kate Middleton were given the titles of Prince and Princess of Wales. It’s hard not to think about Kate’s late mother-in-law, Princess Diana, when that title is heard.

However, Kate is being praised, along with her husband, by Kate Nicholl, author of The New Royals: Queen Elizabeth’s Legacy and the Future of the Crown
, for making their transition “seamless.” She told People, “Kate has also effortlessly moved into a role with so much weight and history and is already making it her own.”

The comparisons to Princess Diana have gone on for years, but the noise is getting a little bit louder now that Kate has the official Princess of Wales title. Although there is a lot of pressure there, she’s going to stay focused on “staying very true to who [she is] and the causes [she has] championed.” Nicholl noted, “It’s no coincidence that one of Kate’s first engagements was to a maternity unit in Surrey, and as Princess of Wales, she’s going to bring even more attention to her Early Years foundation.”

Embracing their titles and the people of Wales is why they made a strategic PR move and visited the area recently where they were “warmly welcomed.” Nicholl believes it signals “who they are and the image of royalty they want to project.” Kate does have big shoes to fill, but she’s doing it in her own way, knowing how important it is to honor Princess Diana’s legacy.

Before you go, click here to see all of our favorite photos of Princess Diana. 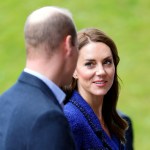