Sounding like a 19th-century MSNBC pundit, John Quincy Adams once complained to his mother, Abigail, that America was interested “in personality rather than actual plans or programs.”

But fine, so maybe the real Adams did not actually say all that — it’s the one in Aaron Posner’s “JQA,” presented online by San Diego Repertory Theater, who does. But the sentiment fits the historical figure this play of ideas introduces, and if it finds an echo now, that is very much the point.

Over the past decade, Posner has emerged as a remarkably astute adapter, best known for retoolings of Chekhov plays that highlight their psychological acuity by transposing them to contemporary settings (“The Seagull” became “Stupid _____ Bird,” “Uncle Vanya” turned into “Life Sucks”). Here, he does something similar with a real figure — a prologue informs us that what follows is “not historical fiction but fictional history” — and turns out an engaging plea for active government and elementary civics. 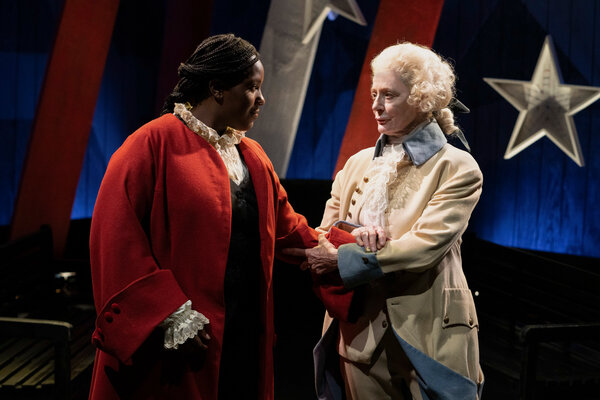 “JQA” is structured as a series of 10 chronological scenes, going from Adams’s childhood until shortly before his death, between the statesman and another person. The interlocutors include Abigail Adams, George Washington, James Madison, Frederick Douglass and, finally, Abraham Lincoln, with whom Adams briefly overlapped in his postpresidential years in Congress. The hook is that four actors of diverse genders, ages and ethnicities handle every character and take turns portraying the title role — always identified by a red coat. (The production is efficiently handled by the stage director Sam Woodhouse and the film director Tim Powell, who only stumble with a cheesy ending.)

This conceit is similar to the one in Todd Haynes’s cerebral biopic of Bob Dylan, “I’m Not There,” but whereas Haynes tried to illustrate how one person can contain multitudes, Posner seems more interested in how a person can represent — and, yes, serve — a country’s many people.

Casting also serves as an ironic distancing device: In addition to pitching in as Adams, for example, Larry Bates also takes on Andrew Jackson and Frederick Douglass; Crystal Lucas-Perry plays Adams; his wife, Louisa; and Lincoln. But the play, which premiered last year at Arena Stage in Washington, does not rely on postmodern, wink-wink nods, and Posner steers clear of hindsight-enriched anachronisms — golf does pop up, probably because it took off in America in the late 18th century, a coincidence just too good to ignore.

Rather, he uses fairly well-known figures to engage in a series of dialectical exchanges that easily find contemporary resonance. Some touch on personal matters, as when Adams brings up his son’s death, possibly by suicide, with James Madison (Rosina Reynolds).

Others are very much political. “Keep ’em scared enough, and you can usually get your way,” the wily Secretary of State Henry Clay (Jesse Perez) advises a dubious Adams. “Keep ’em terrified, and you can run roughshod on the law, take away their liberties, sell them any damn bill of goods you can imagine, and as often as not they’ll thank you for it.”

It’s clear where Posner’s sympathies lie, and indeed “JQA” is unabashedly blue, which here refers both to language (keep in mind there is some cursing but that otherwise the show is appropriate for older kids) and to political affiliation: Through Adams, the play posits an ideal of public service as vital to the integrity of the country’s fabric and its professed values.