When it comes to President Joe Biden and First Lady Dr. Jill Biden’s love story, there’s one chapter we love to hear told time and again. The couple has been married for more than 40 years, but the way their marriage started wasn’t what you’d expect. In fact, the phrase “fifth time’s the charm” is pretty appropriate here. President Biden proposed to Jill five times before she said yes, but the reason why she finally accepted his proposal has a much deeper meaning.

During the couple’s interview on The Drew Barrymore Show, President Biden recalled his proposal story, and how his sons Hunter and the late Beau Biden played significant roles in his decision. “My boys — our boys — were young and they came in and said, ‘Dad, we were talking. We think we should marry Jill,’” the president said. Now, President Biden asked Jill to marry him four times, saying, “I knew this was the woman. I really did.” Each time, though, the First Lady turned him down. It wasn’t until the fifth time the president asked, following a trip, that Jill finally said yes.

“I came back, got off the plane in Philadelphia, drove straight to her apartment, knocked on the door,” President Biden said. “‘I’m asking you one more time. You don’t have to say when, but if you say no, I understand, and that’s it,’” he told Barrymore while Jill sat next to him. “I looked at her and said, ‘Will you marry me?’ She goes, ‘OK.’ Swear to God!” This story makes us capital E emotional every time we hear it. But it’s the First Lady’s reason behind why she said yes after the fifth proposal that really had us reaching for a tissue to wipe the tears from our eyes.

In all seriousness, Dr. Biden’s thoughtfulness when it came to her response to her husband’s proposal really strikes a chord. This wasn’t just the couple’s love story; it was a story about Jill, Joe, and those little boys coming together and opening a new chapter. We can’t get enough of the Bidens’ love story. With each chapter they share, we learn something new and believe in love even more.

Before you go, click here to see our favorite photos of President Joe Biden’s big family. 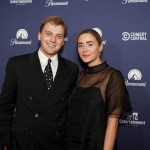