In March 2019, the actor, comedian and writer Jessi Klein wrote an email to her old friend Nick Kroll, a creator and star of Netflix’s intensely bawdy and explicit animated series about puberty, “Big Mouth.” The writers were hard at work on an episode of the fourth season, debuting Friday, called “The Hugest Period Ever.”

In the episode, one of the show’s main characters, Jessi Glaser, who is voiced by Klein, suffers an inconveniently heavy period while away at summer camp. The email’s subject line read: “Random tampon thoughts.”

“It feels like there’s a joke about her looking at the diagram that comes with the tampon box,” Klein wrote. “It’s so useless. Maybe Jessi’s like: ‘So I put it between my leg line up to my … light bulb space?’”

Klein’s name might not strike a chord for casual TV consumers, but she has been a fixture in the industry for more than two decades, lending her sharply observational humor and perspective to programs like “Chappelle’s Show,” “Saturday Night Live” and “Transparent.” Longtime fans might remember her sardonic recaps on VH1’s now-defunct pop-culture commentary series “Best Week Ever” in the 2000s, which also saw appearances from Kroll and John Mulaney, who voices Andrew on “Big Mouth.”

In 2015, Klein won an Emmy for her work as an executive producer and the head writer on “Inside Amy Schumer.” The next year, she published a best-selling book of essays, “You’ll Grow Out of It,” in which she describes winning the Emmy and then immediately retreating to an empty dressing room in the basement of the Nokia Theater: She was three months postpartum and needed to pump. 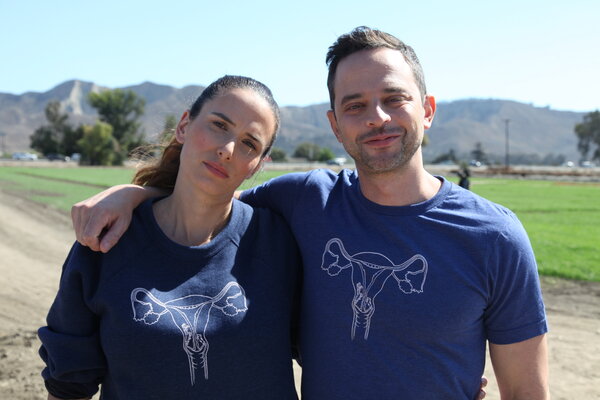 “My friends have gone on to the post-ceremony dinner and I’ve told them I’ll join them there,” she writes. “My Emmy is on the floor. I am not the loneliest I’ve ever felt, but I am not the happiest, either.”

That willingness to poke and prod at her own most vulnerable moments has made Klein a natural fit as a consulting producer for “Big Mouth,” a show that excels at distilling moments of mortification and anxiety into punchy, impish and often deeply vulgar comedic moments. It also informs her character on the show: an intelligent, acerbic teen who has just begun to hack her way through the jungle of her changing hormones. In Season 1, Jessi fumbles through her first kiss, learns to masturbate and suffers through her first period while on a class trip to the Statue of Liberty. (She uses a 9/11 souvenir towel to stanch the flow.) By Season 4, she is sneaking around with her first boyfriend, a self-involved, flaky artist voiced by Sterling K. Brown.

“Jessi has instinctively, throughout her career, scrutinized her horniness and her awkwardness,” Kroll said in a video call last month. “Now that might feel a little commonplace — a comic nostalgically looking back at their own awkward youthfulness or horniness — but Jessi was an early adopter.”

Big Mouth’s humor and levity offer an easy entry point to complex topics. Preteen shame, though nearly universal, is rarely discussed so deeply or probed with such enthusiasm in popular culture, particularly with such careful attention to the small, physical moments that typically go unspoken among girls, like worrying about the outline of your pad against your shorts, or trying and failing to insert a tampon. By putting these moments onscreen, the show validates and demystifies those experiences for its younger viewers — and suggests that girls’ stories are just as worthy of attention as the boys’.

Klein, 45, was barely five minutes into her interview when she launched into the story of her first period — “It’s the original ‘where were you on 9/11?’” she joked. She also talked about period belts (an actual thing), what it means to be “dirty nerdy” and what it’s been like to work on a show she wishes had existed when she was an adolescent. These are edited excerpts from the conversation.

Do you have a sense of why the show’s creators cast you as Jessi back in 2017?

Jessi is based on someone that Nick and Andrew [Goldberg, another of the show’s creators] grew up with, and I think I embody some qualities that remind them of this young woman: a girl who is just as funny and smart as the boys around her, if not smarter. I’ve known Nick for a long time — almost 20 years. And we’ve always riffed off each other well.

Early on in our friendship, Nick gave me the nickname “dirty nerdy,” and I thought, “Yeah, that sounds right.”

I definitely didn’t see any TV shows addressing female desire when I was growing up. The majority of what we were taking in was a mainstream version of female teenagehood. Even seeing “The Facts of Life” was a big, big deal, because it showed girls with friendships and talking to each other and opening up. I remember thinking that was as close as it got to something that represented my inner life.

Did you have a hand in shaping Jessi’s character?

Oh, yeah. I would drop by occasionally and sit with the writers, sometimes working on specific episodes, especially early on. The show’s creators gave me the opportunity to bring stories to the table and talk about personal experiences of my own that could help fuel stories for Jessi. I also remember talking to a few writers about my first period, which I got on Yom Kippur at my grandmother’s house.

That sounds like a scene that could’ve made it into the show.

When I got my period, my mother literally handed me the period belt. No one reading your article will even know what that is. But it’s a thing where the pads clip into an actual belt. Like, how did that happen? She was not keeping up with menstrual technology.

What would my life have been like if there was a very funny, popular show telling me that figuring out how to deal with pads was a normal thing other girls were struggling with? You’re just a human being trying not to bleed out.

There’s a period scene in Michaela Coel’s “I May Destroy You” that shows a blood clot. That was a stunning moment.

I agree. All I feel when I see these scenes — like that one in “I May Destroy You” or the moment in “PEN15” when one of the female main characters masturbates — is just a tidal wave of relief. Like, Oh God, we can show something that’s just a basic fact of our lives? Someone else had the courage to put it on TV, and now we’re allowed to do that?

With “Big Mouth,” I felt the opportunity to get into how teenage girls deal with their burgeoning sexuality and the intense shame you feel as a girl. That topic is on TV more than it used to be, but it is still one of the most taboo topics out there.

I was also really happy with the Missy story line for season 4, where Missy spends time with her cousins and explores her racial identity. I think it’s so important and underexplored on TV in general. It’s great to have Ayo acting on the show. [Ayo Edebiri replaces Jenny Slate late in Season 4 as the voice of Missy, who is biracial.] She was a writer before she started voicing Missy, and she’s amazing.

One thing I love about “Big Mouth” is how it validates the girls’ experiences, from Missy’s frustration with her parents to Jessi’s shame and embarrassment when the boys notice her wearing a bra.

There’s a scene in the new season when Jessi bunks with more “advanced” girls at camp, and at one point they’re like, here’s what we should do to you to “fix” you. Here’s your makeover.

My one experience of camp was in junior high. There were these girls there who brought matching striped shirts, and I really wanted one. But when I tried one on, one of the girls was like: “Oh, that looks weird on you. I guess you can’t wear the shirt.” To this day, I remember that. It just destroyed me.

I’m at a place in my life right now where I’m dealing with more hormones again. And in some ways, it’s like a second adolescence. It’s like that girl telling me that I didn’t look good in her striped shirt. We’re laughing now, but it was truly decimating to me at the time.

Where Did Paris Hilton's First Name Come From?