Jennifer Coolidge has opened up about her epic stint in Shotgun Wedding, and the moment she got her hands on a weapon of her own.

The Hollywood icon stole the show in the flick, which is out on Amazon Prime on January 27 and also stars Jennifer Lopez, Josh Duhamel, Lenny Kravitz and D’Arcy Carden.

It follows Darcy (JLo) and Tom (Josh) as they gather their loved ones in the Philippines for the ultimate destination wedding, while also battling cold feet and second thoughts – however, their dream day is crashed by mysterious armed men who arrive in paradise to hold their guests hostage.

In the most epic moment of the film, Jennifer’s character manages to get hold of one gun and causes huge amounts of chaos – very similar to that White Lotus scene.

Spilling the beans to Metro.co.uk ahead of the release, she confessed that movie bosses were ‘very worried’ about her handling the weapon behind the scenes.

Side note: Have they not seen the season two finale?! 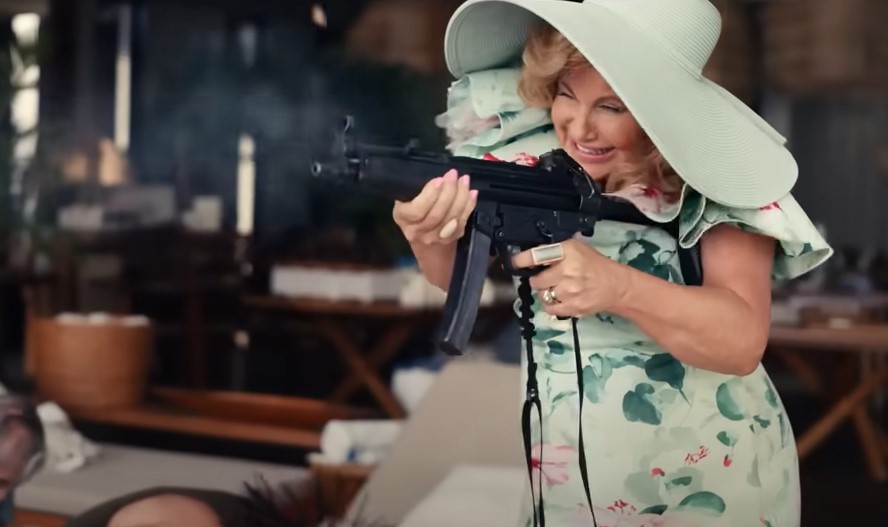 ‘They were very worried about me and the AK-47 that I was handling,’ she told us of the stunt.

‘It was well-founded concern,’ her co-star, Steve Coulter, laughed.

‘It was many, many, many weeks with the gun man …  the guy who handles all the guns,’ she continued.

‘He was so meticulous about how I was supposed to handle it, each day we’d just do a little more. So, when I finally got to do the scene, it was very easy to do.

‘We’re not using real ammunition but things can go wrong, and he just made sure that there was no possibility of anything going wrong.

‘I’m now a full studied person. I got my graduate degree in gun study.

‘But it’s very powerful to be a girl [with the gun] in a movie, it was fun. They usually let the guys do it.’

Jennifer has had a winning week after taking home the Golden Globe for best supporting actress on Tuesday, for her role as the lovable Tanya McQuoid in The White Lotus.

She made headlines with her speech at the ceremony, when she accidentally managed to drop a massive spoiler for her character’s ending in the season two finale.

Giving a shout-out to the series creator, she said: ‘I just want to say, Mike White, you have given me hope. You’ve given me a new beginning, even though this is the end, because you did kill me off, but it doesn’t matter, because even if this is the end, you changed my life in a million different ways.

‘You’re worried about people, and he really is one of the greatest people I’ve ever met. He gives me so much excitement to be, you make people want to live longer. Mike, I love you to death.’

Shotgun Wedding is released on January 27 on Prime Video.