Jennifer Aniston has proved once again that she’s the queen of friendly breakups in her latest group dinner outing.

In a photo shared on Reddit, Aniston appeared to be enjoying dinner with ex-husband Justin Theroux, as well as Howard Stern and his wife Beth, Jimmy Kimmel, Jason Bateman, Jon Hamm, and a few unidentified women.

Aniston and Theroux, who were romantically involved from 2011-2018, didn’t sit side-by-side but Hollywood Life reported that the two “seemed relaxed as they engaged in conversation.” Their friendly interaction isn’t a surprise, as the two have spoken positively of one another in interviews since divorcing, and they’ve publicly shared heartfelt birthday messages with each other after separating.

Aniston is notably still friends with ex-husband of five years, Brad Pitt, who was invited to her 50th birthday in 2019. The two were also spotted having a friendly exchange at the SAG Awards the following year.

Aniston has also spoken highly of ex-boyfriend Vince Vaughn, whom she dated from 2005-2006 after her split from Pitt. In a 2008 Vogue interview, she said, “He literally brought me back to life. My first gasp of air was a big laugh! It was great. I love him. He’s a bull in a china shop. He was lovely and fun and perfect for the time we had together. And I needed that. And it sort of ran its course.”

And, seriously cementing herself as the most chill ex of all time, Aniston also spoke positively about ex-boyfriend John Mayer, whom she dated on and off from 2008-2009. During an “off” period, Aniston told Vogue, “We care about each other. It’s funny when you hit a place in a relationship and you both realize, we maybe need to do something else, but you still really, really love each other. It’s painful.” 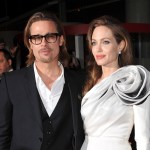 We love that Aniston is the supreme queen of friendly breakups, but we hope her one true love is soon on its way to her — she certainly deserves it.

Before you go, click here to see celebrity exes who will always be friends.