The production also has a new management team to replace Scott Rudin, who stepped aside after allegations of abusive behavior. 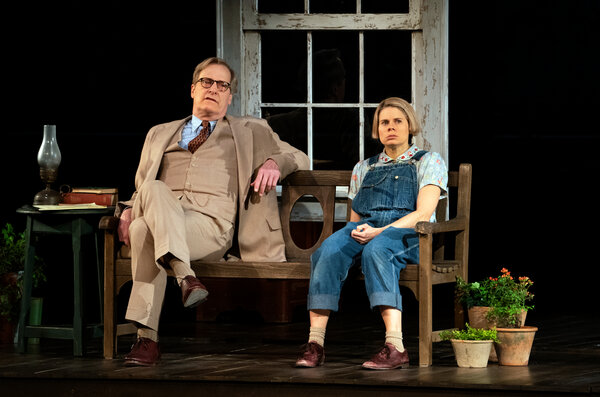 Aaron Sorkin’s stage adaptation of “To Kill a Mockingbird,” which before the pandemic was the rare play to have a long and lucrative Broadway run, will resume performances on Oct. 5.

It will reopen with a pair of familiar faces onstage: Jeff Daniels, who starred as the righteous lawyer Atticus Finch during the show’s first year, will return to lead the cast, and Celia Keenan-Bolger, who won a Tony Award for her portrayal of Finch’s daughter, Scout, in the original cast, will return to that role. They are planning to remain in the cast until Jan. 2.

Offstage, there is more change.

This is the first of Scott Rudin’s shows to announce a plan to move on without its lead producer. In April, Rudin said he would step back from producing after facing scrutiny of his bullying behavior.

The production will now be overseen by Orin Wolf, who was the lead producer of the Tony-winning musical “The Band’s Visit,” and who is the president of a touring company, NETworks, that before the pandemic had been engaged by Rudin to supervise a “Mockingbird” tour. Wolf’s title will be executive producer, and he will be responsible for the show’s operations, reporting to Barry Diller, a lead producer who will be the producers’ managing member with ultimate responsibility for its financing.

“The show was positioned in a strong and beautiful way, and I don’t think my job is to come in and fix anything, but to honor what’s there,” Wolf said in an interview. “I’m not coming in to make artistic decisions.”

Wolf said Rudin would not have any role with the production, adding that he has had no recent communication with Rudin. Wolf’s agreement was negotiated with Diller, he said, and a condition of his employment was that Rudin would have no voice in the production.

“The Broadway company will no longer pay any compensation to Scott as a producer, and he’ll no longer have any managerial or decision-making role of any kind,” Wolf said. “He does have a small investment position, which is passive.”

“To Kill a Mockingbird,” adapted from the 1960 Harper Lee novel, opened on Broadway in December 2018. It has consistently played to full houses; over the course of the play’s prepandemic run, it had an audience of 810,000 people and grossed $120 million, according to the Broadway League. The show recouped its $7.5 million capitalization — the amount of money it took to bring it to Broadway — 19 weeks after opening.

Wolf, who has collaborated several times with the director of “Mockingbird,” Bartlett Sher, said he agreed to manage the production in order to try to protect both the show and its 182 employees. “We’re going into uncharted territory,” he said, “but my job is to make sure we’re creating an environment for the artists to do their jobs, to make sure we’re putting the production back up that people loved, and once we’ve done that job, my job is to keep trying to discover what this post-pandemic audience is.”