Nearly two million people watched live on Thursday night as two Southern rap heavyweights, Gucci Mane and Jeezy, leaned into, and then seemingly set aside, 15 years of bad blood during the latest edition of the pandemic streaming hit battle Verzuz.

From matching thrones set up on opposite legs of the H-shaped stage at the storied Atlanta strip club Magic City, the rappers — early collaborators turned sworn enemies — traded radio smashes and underground street classics for nearly two hours, often with little regard for pleasantries.

The webcast, presented jointly on Instagram Live and Apple Music, began shortly after the State of Georgia announced the completion of its presidential recount, reaffirming that President-elect Joseph R. Biden Jr. had defeated President Trump in the state. But before the show could start, the former Georgia gubernatorial candidate, Stacey Abrams, appeared virtually, thanking the musicians for the “street cred” the cameo lent her and urging people to vote in the state’s upcoming Senate runoff election.

“Can you wipe my record clean?” asked Gucci Mane, 40, who spent much of his career in and out prison before finding sobriety and even greater success as a motivational figure, author and rap elder statesman. (Abrams replied that such a thing would be up to the governor.)

Yet even before Abrams could complete her public service announcement, Gucci Mane jumped into “Round 1,” a diss song from 2005 aimed at Jeezy, 43 and formerly known Young Jeezy, setting the wobbly tone for the night.

Both godfathers of Atlanta trap music, the early-2000s drug-dealer anthems that would go on to influence the next 15-plus years of hip-hop and pop, Gucci Mane and Jeezy initially fell out over control of “Icy,” an early club hit featuring both artists that set the table for their mainstream careers. 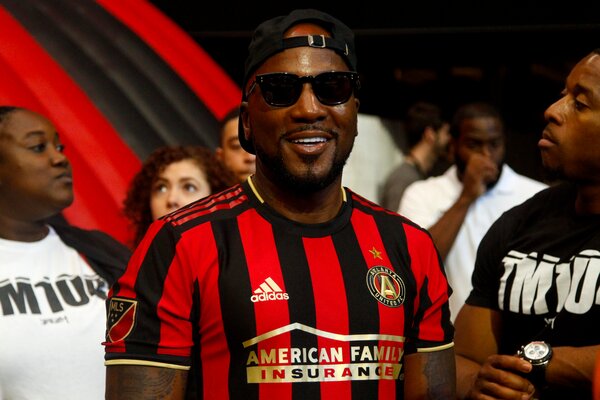 After trading rapid-fire diss records in the wake of the single’s release in 2005 — including one in which Jeezy offered a $10,000 bounty to anyone who could steal the “Icy” diamond chain Gucci Mane had made to celebrate the song’s success — a home invasion left one man dead of a gunshot wound, and Gucci Mane was charged with murder.

The deceased, an aspiring rapper known as Pookie Loc, was reportedly close to signing with Jeezy’s label, Corporate Thugz Entertainment, at the time, and many linked the incident to the rap beef. Jeezy has long denied involvement — “Lord knows I ain’t send the homie on no dummy mission,” he rapped a decade later — and murder charges against Gucci were eventually dropped as he claimed self-defense.

So while many Verzuz battles — which have included Alicia Keys vs. John Legend and Gladys Knight vs. Patti LaBelle — have been lovefests, or otherwise passive-aggressive musical showdowns, this one was decidedly more heated. Each man played 24 tracks, and while Jeezy leaned into past hits like “Standing Ovation,” “Go Crazy” and “Air Forces,” Gucci Mane did not shy away from pure venom, including multiple songs that demeaned Jeezy by name and detailed the killing of Pookie Loc.

The tension also rose in between songs, as the men compared longevity, real estate holdings, outfits and influence. “That was cute,” they each sneered at various points.

After Gucci Mane performed a particularly scathing account of their disagreements, “Truth,” to Jeezy’s face, finishing it with further taunting, an argument nearly broke out in earnest as the men repeatedly interrupted one another. “I told you straight off the dribble,” Gucci Mane said, “we can’t do nothing if it ain’t street. If I can’t perform the ‘Truth,’ we can’t do it.” Jeezy countered that he wanted to appear together “for the culture.”

“I brought you here to show you that the world care about what we got going on, because we are the culture,” he said, adding expletives. “Me and you. Where we came from. What we’ve been through.” He then cited their influence in the shooting deaths of rappers like King Von, Nipsey Hussle and Pop Smoke, before diving straight into another song.

But in something of a surprise turn, the stream ended on a note of reconciliation, or at least good business. After Jeezy offered up a likely inevitable duet of “Icy,” with each man dancing happily and performing his verse at a distance, Gucci Mane plugged a joint appearance at a local nightclub, with little regard for the raging coronavirus. Each rapper had a new release set to drop at midnight — a greatest hits mixtape for Gucci Mane, a new album for Jeezy — and the demons, apparently, had been exorcised.

“Listen, all respect,” Gucci Mane said. “I appreciate you for throwing out the olive branch — I accept that. No disrespect. It’s all love.”