Home » Entertainment » Is It OK to Use Connections to Jump the Line for a Specialist? 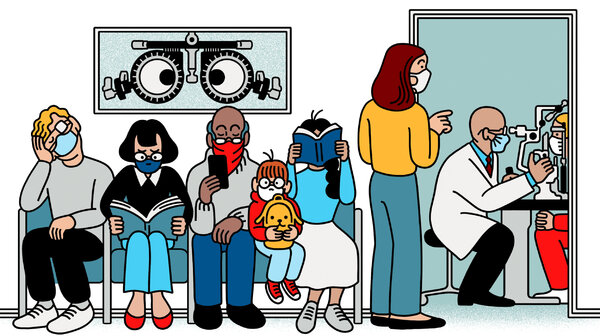 Over the past few years, my sister-in-law has experienced unusual problems with her eyesight for which she has seen several ophthalmologists and neurologists, some at private practices and others at major medical centers. There has been no consistency in the diagnoses and even less clarity in recommended treatments or medications. The condition seems to be getting worse and more complicated with time.

My sister-in-law was recently advised to call a doctor whom many believe to be the leading authority in neuro-ophthalmology. Not surprisingly, the first available appointment was four months out. She is distraught.

I have spent my life eschewing preferential treatment that might arise from anything other than my own hard work. But in this case, I am so conflicted. A very dear friend happens to be a close colleague of this physician. I know that he could easily get my sister-in-law in to see the doctor tomorrow if I asked.

So, what am I to do? I cannot stand seeing my sister-in-law literally writhe with anxiety. Her tears echo mine. Her future is up in the air. But so, too, seem to be my lifelong principles. Which response is the best one for both of us? Name Withheld

One significant form of inequality in our society is inequality not of wealth but of access. Social scientists sometimes mark a distinction between “social capital” and “financial capital” — the Rolodex versus the Rolex — and social capital can play an important role when it comes to making available the best medical treatment. You’re plainly committed to the idea that society should be organized in ways that don’t allow differences in social capital to lead to significant differences in medical outcomes. (Otherwise your concern would be only for your personal moral standing.) Wouldn’t it be inconsistent for you to use a personal connection to secure what you term “preferential treatment” for your sister-in-law?

Not necessarily. Contrast the sources of your responsibilities to your sister-in-law on the one hand, and of your principled opposition to preferential treatment on the other. Your responsibilities to your sister-in-law are specific to your relationship with her. You have what philosophers call “special obligations” to her — obligations that you don’t have to people in general. Special obligations are a feature of friendship and kinship. Your concern to avoid taking advantage of your social capital in this case — your concern for social fairness — is different: a general ethical commitment without specific roots in your relationships.

Next, we might want to distinguish between the rules of the system and the discretion that some doctors may choose to exercise. Doctors might say, plausibly, that they can treat those they aren’t connected to as well as they should, maintaining a high level of professionalism and respecting the rules, while still treating those they are connected to even better, perhaps by lengthening their workday and fitting them in earlier. The point is that you can both be committed to a society that fairly allocates medical attention and acknowledge the special demands of your relationship with your sister-in-law — and your friend’s relationship with this doctor. You can give weight both to the general principle, as a citizen, and to these particular concerns, as an intimate of this patient.

Political theorists sometimes distinguish between “ideal theory” — an account of justice that tells you what you should do in a world where everyone was in compliance with the theory’s dictates — and “nonideal theory,” which starts closer to our social realities. In a perfectly fair world, where medical resources were allocated by a proper evaluation of needs, your sister-in-law might or might not have to wait many months for her appointment. But in the actual, imperfect world, your taking advantage of a connection you happen to have doesn’t obviously make our society worse: The doctor can be doing what he’s entitled to do, and the system’s unfairness is not worsened by your act. “Her tears echo mine,” you say. If you secure special treatment for your sister-in-law, you may think that someone has done something wrong. You don’t need to think that this someone is you.

Before the pandemic, I managed to score discounted student tickets to an opening-night concert for a major symphony orchestra, featuring a star soloist renowned for a dynamic style of playing. I was familiar with the soloist’s work and was thrilled about seeing a live performance for the first time. In talking with a musician friend about the upcoming performance, she shared with me that she had heard rumors about “less than appropriate” encounters between this soloist and other student performers. Neither she nor anyone she knew had firsthand experience of this, but the fact that she mentioned it had me questioning whether I should attend. On one hand, rumors may amount to nothing more than just that; on the other, the art world has certainly not been immune to predatory individuals occupying positions of prestige and power — individuals who are often only unmasked by what begins as “rumors.” Would it have been ethical of me to cancel my ticket to prevent contributing to an individual who has reportedly used status and power to prey on younger performers, or would it have been unethical to do so on the basis of unsubstantiated “rumors”? Name Withheld

Versions of the quandary you describe have been much mulled. There are countless people who found a soundtrack for their lives in R. Kelly’s “I Believe I Can Fly” or Michael Jackson’s “Don’t Stop ’Til You Get Enough.” Tupac Shakur’s “Keep Ya Head Up” was, for many, a stirring feminist anthem. The musical world writhes with earworms spawned by multiplatinum artists who have been arraigned or (as in Tupac’s case) convicted on sex-abuse charges.

Still, one person’s vague report of rumors — a rumor about rumors — isn’t a reasonable basis for assuming the guilt of the artist in question. Allegations should, of course, be investigated by competent authorities; the symphony orchestra, too, should look into such claims, if they came to them from a credible source, before deciding to engage the soloist. But it’s not the responsibility of random people who hear a random rumor to look into it.

Suppose, however, that you were confident this musician had engaged in acts of sexual abuse (to give contours to the foggy phrase “less than appropriate”). It’s worth thinking through the ways in which attending the concert might or might not have implicated you in something meriting your disapproval.

When you speak of “contributing,” you perhaps had in mind the money paid for your ticket. Many of us share Kant’s view that it is better if the guilty do not prosper. But even had you been refunded for the canceled ticket and the concert venue unable to resell it, the derisory loss represented by your discounted student ticket would have been borne by the venue and by the orchestra. (Whether the orchestra suspected the bad behavior would be relevant to how you thought about that.) The soloist would almost certainly have been hired for a specific fee, as my friends in the business tell me, and not entitled to a share of the box office. Nor would a single canceled ticket send a message.

It would be a different story if you were part of a large group of boycotters, of course. Still, even if we focus on your solitary decision, there are other ways of thinking about your contribution. Regardless of your action’s practical consequences, you could think that, as the Torah says, you shouldn’t follow a multitude to do evil — that you shouldn’t, directly or indirectly, participate in a significant wrong. To put a finer point on it: You don’t want to take part in an event that honors or elevates a person you know to be a wrongdoer, whether or not that person learns of your views or is affected by your act.

Furthermore, as a morally sensitive person, you may find yourself distracted from the musical experience by the thought of those wrongs. Still, I must admit I have regularly listened with pleasure to recordings made by the conductor Herbert von Karajan and by the soprano Elisabeth Schwarzkopf, both of whom, out of expedience or worse, joined the Nazi Party. It clearly is possible to detach an aesthetic experience from the moral offenses of its creators.