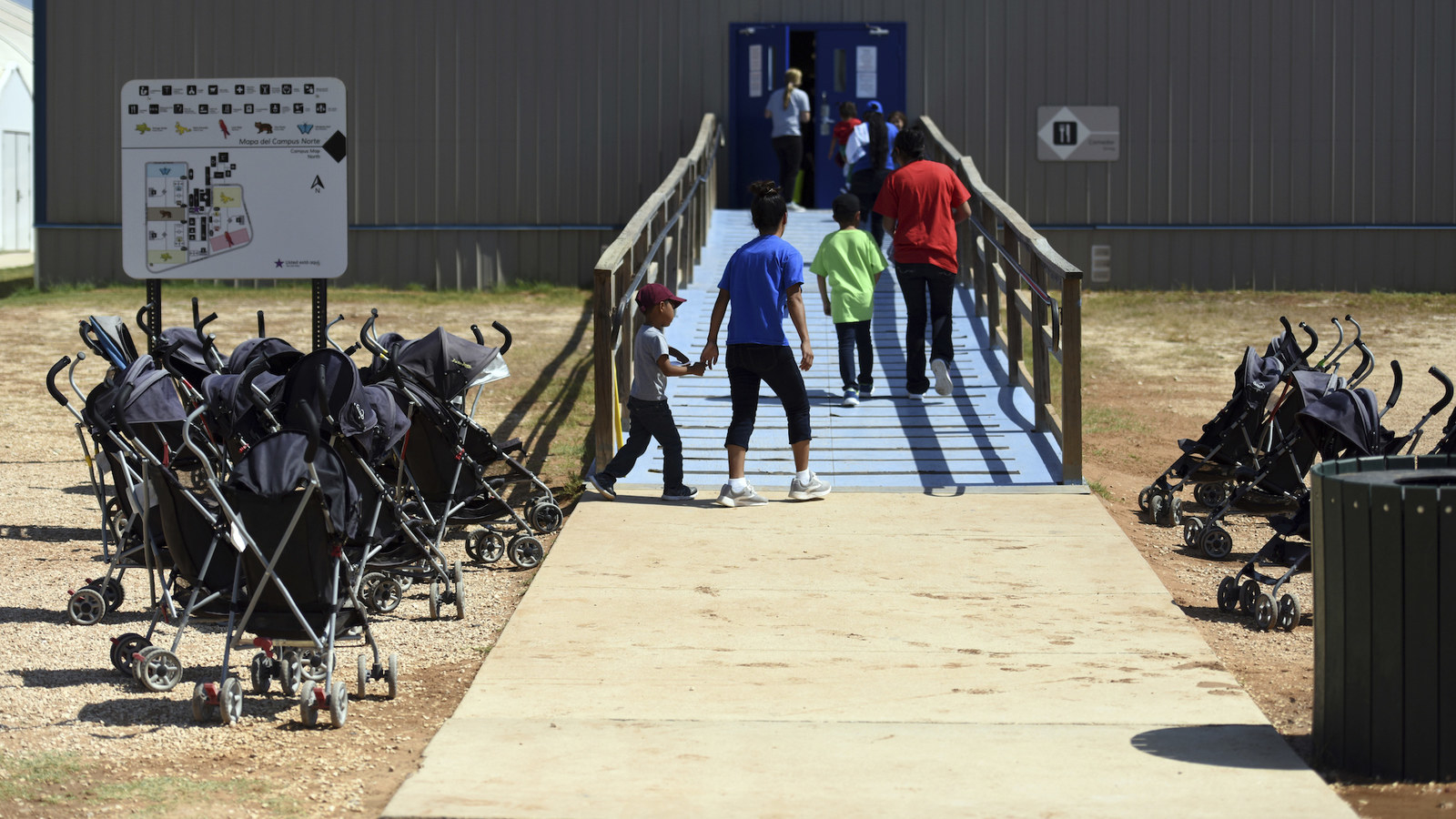 Detainees at the South Texas Family Residential Center in 2018.

An operation to arrest undocumented immigrant families in several cities across the US is expected to begin Sunday, and one of the largest family detention centers has stopped booking new detainees to clear space to hold them, according to two sources with knowledge of the plans.

The planned multi-day operation will target undocumented families who have been issued final removal orders, and comes soon after the administration secured additional funding to handle the record number of families crossing the border this year.

Meanwhile, the South Texas Family Residential Center in Dilley, Texas, has stopped admitting new detainees, dropping its population from 1,628 people to just over 200 as of this week and creating added capacity to hold families picked up in the raids. Families generally cannot be held for longer than three weeks. 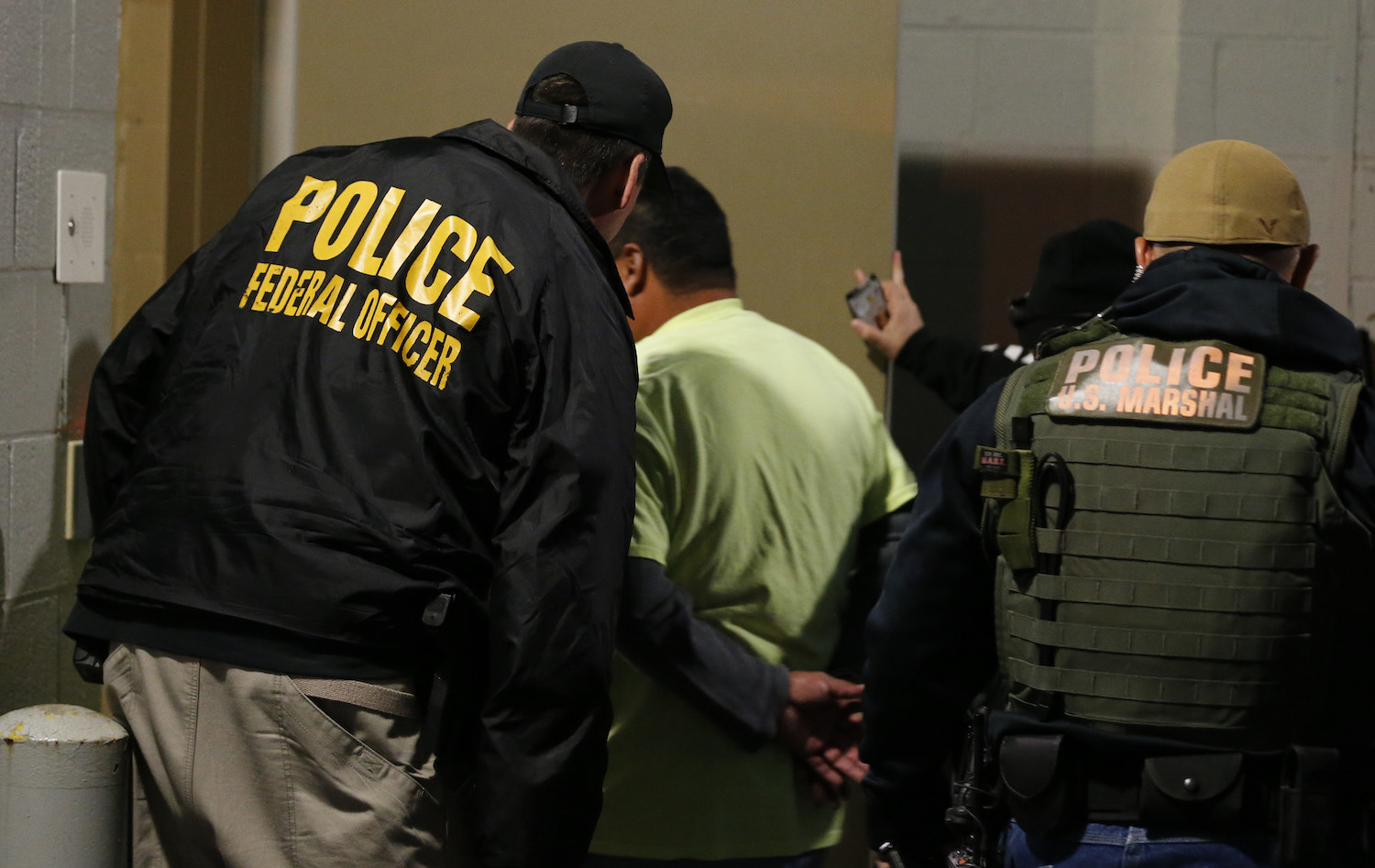 ICE agents escort a target to lockup during a raid in Richmond, Virginia, on Oct. 22, 2018.

A similar operation was canceled last month. President Trump claimed the move was a way to continue negotiations with Democrats, while others in the administration blamed leaks of operational details. Since then, US Immigration and Customs Enforcement (ICE) has undergone major changes, with former acting director Mark Morgan shifting to lead US Customs and Border Protection and previous leader Matt Albence returning to head up ICE.

In the past several weeks, attorneys and civil rights organizations have distributed notices that they will be prepared to help immigrants caught up in any operation. They also reminded people that they are not legally required to open the door to ICE officers.

“We don’t want them to panic or give into this fear the current administration is trying to instill into our communities. We are ensuring they have the tools necessary if something were to happen,” said Ariana Martinez Lott, coordinator of the Faith In the Valley Watch Network in Northern California.

Other advocates have signed up volunteers to film ICE officers if operations are reported by community members.

In the run up to the last operation, Morgan was candid and provided many details on the planned action.

In a call with reporters last month, Morgan focused on a group of around 2,000 people who were part of an expedited docket at immigration courts reserved for family units who have recently arrived. Across the country, 10 immigration courts in cities like San Francisco, Miami, Houston, Baltimore, and Los Angeles, have quick dockets for immigrant families.

Those 2,000 people, Morgan said, had been ordered removed “in absentia” — without appearing in court — and notified to present themselves at ICE offices to facilitate deportations. Morgan argued they had been given an adequate level of due process and a chance to make their case in court. Without officers targeting and removing them, immigrant families from Central America would continue to come without any fear of consequences, he added

One source with knowledge of the previous operation said the plan was to target more than 3,000 undocumented families with final removal or in absentia deportation orders in 14 regions across the country. Because of previous capacity issues, the plan was to hold certain individuals in hotel rooms, others in a family detention center in Pennsylvania and Texas, while some would be released with anklet monitors.

In the aftermath of the canceled operation, a former Department of Homeland Security official said morale at ICE had taken a beating.

“Down to the officer level — they are sick of this, their safety being compromised, setting expectations so high that they can’t meet them. Everybody is frustrated,” the former official said.

In any operation, ICE officials gather data, including one’s address, last place of employment, and other details, and begin surveillance to determine the patterns of immigrants suspected of being in the country without authorization. Often, people on a target list are no longer living at their last known address or ICE officers are unable to make the arrest. Under the Trump administration, ICE officers have been told not to exempt any group of undocumented immigrants, which can lead to what is known as “collateral arrests.”

Some Department of Justice officials with knowledge of the expedited family docket previously raised concerns about the way the Trump administration has described immigrants who have been ordered deported “in absentia.”

“Scheduling these cases too rapidly increases the in absentia rates, as people don’t have time to find help from pro bono organizations or attorneys and are fearful of appearing alone,” one Justice Department official told BuzzFeed News. “It also increases the possibility of errors on notice.”

The official pointed to the high number of immigrants with absentia removal orders at locations near the border, like Houston, which are usually not final destinations.

“It’s a gross generalization,” another DOJ official said. “There are a lot of reasons why someone might miss a hearing. Notice issues, ‘exceptional circumstances,’ etcetera. To say that people are just skipping out is not appropriate.”

In anticipation of the operation targeting those who were ordered deported after not appearing at their hearings, the ACLU filed a lawsuit in federal court in New York on Thursday.

“The Trump Administration’s plan to arrest and deport thousands of Central American families and children without giving them a fair day in court is both illegal and immoral,” said Ahilan Arulanantham, a senior attorney at the group’s Southern California office. “More than 100 years ago, the Supreme Court decided that immigrants could not be deported without due process. These vulnerable refugees deserve that basic protection.”