Home » Entertainment » How J Balvin and Bad Bunny Made Their Surprise Album, ‘Oasis’

About three-quarters of the way through “Oasis,” the new eight-song collaborative album by the Latin superstars J Balvin and Bad Bunny that was released without much warning overnight, there is a lyrical allusion that will prove familiar to many Spanish speakers acquainted with ’90s rock or drunken karaoke.

“Y tu corazón idiota siempre me extrañará,” Balvin sings — and your idiot heart will always miss me — riffing on a line from the singalong classic “Lamento Boliviano,” by the Argentine band Los Enanitos Verdes.

The moment is more than just a passing reference — it’s a bridge to another sound, another country, another generation: Over acoustic guitar strums later in the song, “Un Peso,” the 58-year-old singer Marciano Cantero of Los Enanitos Verdes appears, delivering an extended verse.

More than a lark or a flex, the unexpected feature speaks to the cumulative, overlapping creative projects of Balvin, 34, a native of Colombia, and Bad Bunny, 25, who is Puerto Rican, as they expand the reach and rules of Latin music. Each has taken the blueprint of reggaeton — the rhythm-driven, Caribbean-influenced strain of Spanish-language hip-hop — and with some added flair and international collaborations led a new generation of artists to the pop mainstream under the wide umbrella of genres known as música urbana, or urbano.

Alejandro Duque, the managing director of Universal Music Latino, the label overseeing the surprise release of “Oasis” — a first of its kind on this scale in Spanish music — called Balvin and Bad Bunny “the two biggest risk-takers in the business right now,” and praised their global palette. He compared Cantero’s cameo to if Drake and Future had invited Steven Tyler of Aerosmith to guest on their joint mixtape “What a Time to Be Alive.”

“If tomorrow I want to release a rock album or I want to release a bachata album, nobody can tell me anything — why can’t I?” said Bad Bunny in an interview, demonstrating his disregard for genre traditionalism. “We need to try to unite audiences, unite countries, join musical tastes, unite people.” 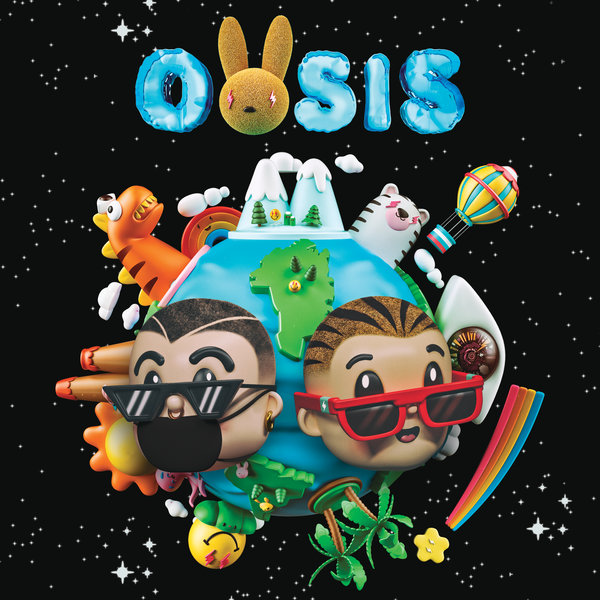 Elsewhere on “Oasis,” Balvin and Bad Bunny, who share a reputation for ostentatious dress and jewelry, continue to cycle through a summery suite of pan-Latin sounds, not resting only on old-school reggaeton energy or the Atlanta trap influence of current urbano, but positioning themselves as ambassadors and guides through the increasingly global world of popular music.

Over the past few years, the pair has exploited the collapse of genre and the nearly limitless reach of digital streaming and YouTube to cross over in unprecedented ways — including as guests on Cardi B’s No. 1 smash “I Like It” — while singing and rapping exclusively in Spanish. They pack their lyrics with geographically specific references and cultural allusions, offering no concessions to the white American audiences that have nonetheless embraced them. (This week, Balvin announced that he had signed with Scooter Braun, the power-manager behind Justin Bieber and Ariana Grande.)

Asked why it was important to sing in Spanish, Bad Bunny, born Benito Antonio Martínez Ocasio, jumped onto a group FaceTime call with Balvin and said simply (in Spanish): “Because that’s the language we speak.”

Duque of Universal Music Latino noted that although Latin pop artists like Enrique Iglesias had transcended language barriers before, “Despacito” — the megahit by Luis Fonsi, Daddy Yankee and Bieber — had proven to be a sea change. “When I was getting started, you found an artist that was homegrown in the U.S., and even if they were of Latin heritage, they wanted to sing in English,” he said. “Today, even artists who are more comfortable speaking English think it’s cool to speak Spanish.”

Balvin and Bad Bunny’s global mission is apparent on the second track of their joint LP, “Yo Le Llego,” as they each shout out Latin America, beginning with their homelands: Colombia, Puerto Rico, Mexico, Argentina, Venezuela, Chile, Panama, the Dominican Republic. The final song, “Como Un Bebé,” features vocals — and rhythmic influence — from the Nigerian Afrobeats singer Mr. Eazi, who himself fuses Ghanaian highlife sounds with R&B.

Over FaceTime, Balvin and Bad Bunny revealed their easy, big brother vs. little brother dynamic, ribbing one another about fashion, their age difference, food, reliability and creative authority. “I’m always the leader,” Bad Bunny said from Puerto Rico, beating his chest in a yellow hoodie and two nose rings (nostril, septum), in between bites of a hefty calzone.

From a hotel lobby in Paris, Balvin, whose shaved head was dyed a Pride-ready rainbow, went with the bit from behind his Louis Vuitton sunglasses: “I just followed Benito’s orders, and from time to time, he let the chains go so I could breathe.”

Recognizing their dueling menus — Balvin was grazing over a plate of chicken and vegetables — Bad Bunny sighed: “That’s why I have a belly and José doesn’t.”

The men met for the first time at a J Balvin concert in Puerto Rico, when Bad Bunny was a rising artist on SoundCloud. Bad Bunny has said he had to leave the studio to cry while recording their first collaboration, the 2017 track “Si Tu Novio Te Deja Sola,” a one-off single that now has more than 875 million views on YouTube.

“It was too much emotion for me, and I was very sentimental,” he recalled. “I couldn’t believe it, and I was really grateful. I think that song changed my career.” Balvin said he was just happy to have found “another weirdo, another crazy guy like me.”

The pair went on to feature on numerous remixes together, but said they really grasped the power of their joint chemistry after “I Like It,” which was nominated for record of the year at the Grammys. The duo began teasing the possibility of an entire collaborative album more than a year ago, but it took a back seat as they released and promoted their respective solo albums around the world.

“It’s impossible to contact him, trust me,” Balvin said playfully. “It’s easier to find Obama.” He added: “I wake up at 5 a.m. and he goes to sleep at 5, but it’s a good thing, because I can call him from the treadmill and he’s on the way to bed.” 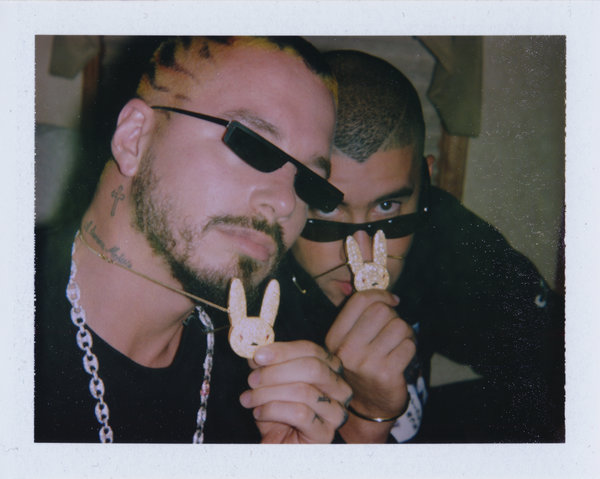 But over the last few months, Balvin and Bad Bunny finally carved out enough time to finish “Oasis” — and squeezed in the filming of three music videos — after locking in for a week at a Miami studio with beats from their go-to producers, Tainy and Sky. “It seemed like making music at a picnic — everyone relaxed, there was no pressure,” Bad Bunny said.

Where competition did crest was in seeing who could record faster, which also revealed a divide in their processes, the men said: Balvin likes to improvise his flows and melodies in the vocal booth, while Bad Bunny, a more reserved and solitary presence, rehearses in private before getting on the microphone.

Bad Bunny said he took the win, nailing a verse in about three minutes — “because I had practiced it all morning,” he added mischievously.

Still, the reverence for his elder shone through, even as Bad Bunny padded his praise with in-jokes, irony and sarcasm. Referring to the song “Odio” (“Hate”), a pop-R&B number and the closest thing to a ballad on “Oasis,” Bad Bunny recalled writing it long ago and having to wait forever for Balvin to finish his section.

“Someone must have cheated on you, José, because you were so upset when you recorded that song,” he said, seemingly elated by what he called a “very hateful” verse.

“Thank God, José is in his forties, and I’m still 25 years old,” Bad Bunny added, exaggerating, while also acknowledging his partner’s achievements, from fashion collaborations to working with Beyoncé: “When I grow up, I want to be like Balvin.”

Joe Coscarelli is a culture reporter with a focus on pop music. His work seeks to pull back the curtain on how hit songs and emerging artists are discovered, made and marketed. He previously worked at New York magazine and The Village Voice. @joecoscarelli