Hilaria Baldwin responded over the weekend to criticism that she has been deceptive about her ties to Spain.

The wife of actor Alec Baldwin has publicly presented herself as Spanish for years, often speaking with a Spanish accent during public appearances.

But a damning Twitter thread that went viral last week called the yoga and health expert’s European persona a “decade long grift,” spurring Baldwin to post a lengthy Instagram video on Sunday that clarifies her relationship to Spain.

“I’ve seen chatter online questioning my identity and culture,” Baldwin wrote in a caption for the video. “This is something I take very seriously, and for those who are asking ― I’ll reiterate my story, as I’ve done many times before.”

“I was born in Boston and grew up spending time with my family between Massachusetts and Spain,” her caption continues. “My parents and sibling live in Spain and I chose to live here, in the USA. We celebrate both cultures in our home ― Alec and I are raising our children bilingual, just as I was raised. This is very important to me. I understand that my story is a little different, but it is mine, and I’m very proud of it.”

Despite that clarification about her being born in Massachusetts, the biography on her Creative Artists Agency speakers page, as of Monday morning, still said that she was born on the Spanish island of Mallorca and raised in Boston. Both CNN and the Daily Beast linked to this bio. 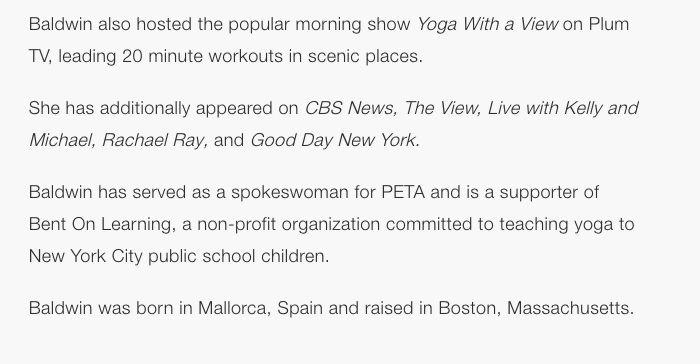 By Monday afternoon, however, that line about her birth had been deleted from the CAA bio. HuffPost reached out to Baldwin’s publicist for comment but did not receive an immediate response.

On Dec. 21, Twitter user @lenibriscoe wrote that one has to “admire Hilaria Baldwin’s commitment to her decade long grift where she impersonates a Spanish person.” The following tweet thread was packed with examples of the alleged impersonation.

Posts in the thread include a video of Baldwin speaking without a Spanish accent and others in which that accent is very apparent — including a clip from a “Today” show cooking segment in which Baldwin seemingly forgets the English word for cucumber.

Another post boasts a review of the former dancer’s appearance on the “#MOMTRUTHS” podcast in April. The reviewer claims that they knew Baldwin in high school and that she “didn’t have an accent then.”

In the actual podcast interview, Baldwin said that she came to the United States at age 19 to attend New York University.

The Twitter user @lenibriscoe, who said that she’d prefer to remain anonymous, told HuffPost via Twitter that she decided to post her thread because she’d always found Baldwin’s image as a Spanish native “offensive.”

“When u think about the parents who came here,” she told HuffPost. “And had their kids torn away and put in cages and what actual immigrants go thru and how hard it can be for people who don’t speak English as a first language to get jobs and how people mock accents I just …. the audacity of this white woman.”

The viral thread prompted others to tweet that they also knew Baldwin as a high school student in Massachusetts and that her name back then was Hillary Hayward-Thomas.

“I went to high school with her. Genuinely lovely person, I recall, but fully a white girl from Cambridge,” said one Twitter user in the comments of the @lenibriscoe thread.

Another wrote: “I went to HS with Hillary Hayward Thomas in Boston and she had no accent. was archetypal northeastern prep schooler. we all mythologize ourselves, but her pretending to be ESL is a level of exaggeration that seems problematic.”

According to a Nexis search conducted by the Daily Beast, Baldwin’s New York voter registration is under both names: “Hilaria L. Baldwin” and “Hillary Hayward-Thomas.” The outlet also reported that Baldwin attended the private Cambridge School of Weston in Massachusetts, and it published a photo from her senior yearbook in which her name is listed as “Hillary Hayward-Thomas.”

In her Instagram video, Baldwin seems to blame the media for confusion over her past. She does offer an explanation of sorts for why she speaks English with a Spanish accent at times and with an American accent at other times.

“I am that person that if I’ve been speaking a lot of Spanish, I tend to mix them, and if I’m speaking more English, then I mix that,” she says. She notes that this mixing of accents is something she’s always been “a little insecure about.”

Her husband also went on Instagram to defend his wife, saying that the claims that she was somehow faking her heritage were “ridiculous.”