Home » Entertainment » Have We Finally Caught Up With Andrea Fraser?

IT WAS NEARLY closing time at the museum: Long shadows had already devoured most of downtown Los Angeles and the hangar-like space was hushed. Andrea Fraser stood before a small TV watching “Official Welcome,” one of her landmark performances. Onscreen, she appeared in a tasteful black dress at the opening of her 2003 exhibition in Hamburg, Germany, making remarks from a lectern. She thanked the curators who had made her retrospective possible; she thanked her mother, who had flown all the way from California for the event. The crowd clapped on cue. But then the woman went rogue, as though a computer virus had infected her gracious-artist software. “Thank you, Andrea,” she boomed in a deep male voice, morphing into the first of more than a dozen art-world personae who take over the speech — a piratical dealer, a fawning patron, an artist best known for pickling a shark. Before it’s over, she has shed her dress and then her Gucci bra, thong and stilettos to address the audience fully nude. “It takes a lot of courage to do what she does,” she said, assuming the voice of an approving critic. “She goes far beyond where most artists have the intelligence or audacity to operate.” The 30-minute piece — funny, brash and often excruciating — ends after the woman, back in her dress but somehow more exposed than ever, breaks down in sobs.

Tears pooled behind Fraser’s glasses as she watched her younger self. But the moment passed quickly, and she returned to critiquing the work on view, at the Geffen Contemporary at the Museum of Contemporary Art, with cleareyed detachment. “I could have given that a little more time,” she said, catching herself rush a beat.

“Official Welcome” is a case study in the intellectual rigor, physical bravura and satirical wit Fraser brings to diagnosing the collective delusions, material excesses, fraught politics, grandiose rhetoric, bumptious egos, ingrained biases and sundry pretenses of the art world. For the past 30 years, she has reigned unchallenged as the doyenne of institutional critique, a branch of conceptual art concerned with the internal machinery of museums and other social constructs. Lately, that machinery has been the subject of intense public scrutiny. This year alone, activists have stormed the exhibition halls of elite museums, targeting their private funding sources. The Louvre scrubbed the Sackler name from one of its wings following demonstrations condemning the family’s ties to the opioid crisis just months after the Solomon R. Guggenheim Museum and the Metropolitan Museum of Art in New York, as well as the National Portrait Gallery and Tate in London, embargoed Sackler donations. This summer, the businessman Warren Kanders resigned from the Whitney Museum of American Art’s board of trustees amid outrage over his company’s production of tear gas canisters used on migrants at the U.S.-Mexico border. 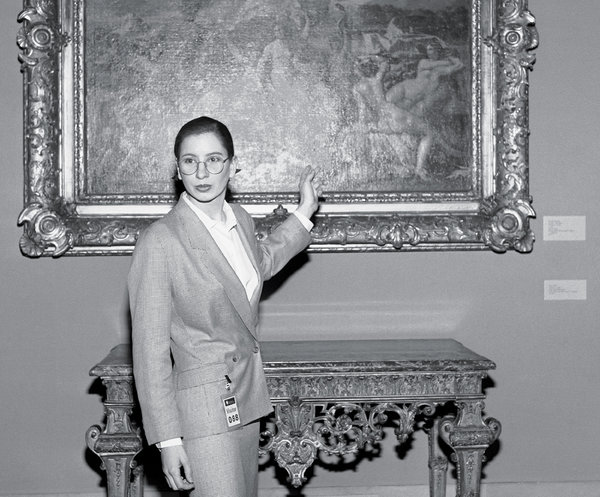 Fraser is a fierce critic of the status quo, but her approach is different from that of most artist-activists. For most of her career, she has fused archival research, psychoanalysis, sexuality and humor in diverse projects that examine the art world’s subconscious — the web of desires that shape its economy, power dynamics and social relationships — and her own place within the system. In 2001, she spoofed the museum world’s fetish for glitzy new buildings by grinding sensuously against the curvaceous limestone walls of the Frank Gehry-designed Guggenheim Bilbao, her acid-green dress hiked up around her waist, driven to ecstasy by the audio guide. Two years later, she filmed a sexual encounter with a collector to create her most notorious work, “Untitled,” a piece some praise as the ultimate comment on art as empty commerce and others dismiss as an attention-grabbing stunt.

Fraser’s occasional bouts of nudity often eclipse her careful choice of costumes, reflecting a savvy that extends to her civilian life — clothes are the only belongings Fraser accumulates other than books. They are props people use to perform themselves, and Fraser’s eye for the subtle ways that they broadcast self-assurance or camouflage fragility helps give her work its bite. In the language of her art, clothes serve as verbs — active and dynamic forces. Her outfit at the Geffen that hot day in late September — a floral jumpsuit, suede mustard-colored mules and violet toenail polish — delivered a jaunty riposte to the little black dress she wore in the video. Fraser swears at parking meters like a New Yorker (she was based in the city for 25 years) and rhapsodizes about gardening like the Los Angeles transplant she has become (she’s lived there since 2006 and currently shares a home in the San Fernando Valley with her husband, Andy Steward, and their toy poodles, Winnicott and Bowlby).

All of Fraser’s works combine a trenchant and unsparing intellect with a magnetic physical presence. She stands with the alert posture of a dancer and passes through the world with the kind of fluid, feline awareness that makes it difficult to imagine her tripping or dropping her keys. At 54, her face is practically unlined. Intently impassive when she is listening to others, her features fly into motion when she is discussing matters close to her heart, from psychoanalytic theory to samba dancing. Listening to Fraser speak in the measured timbre of a veteran academic, as she often does, is a bit like listening to an opera singer softly hum a tune — it can be suspenseful, knowing just how much power she is capable of unleashing, how much voltage is being kept under control.

In “Official Welcome,” Fraser’s physical powers are on full display as she stomps and strips and mimics the gestures of recognizable art-world figures. (For the script, Fraser culled excerpts from actual speeches and interviews, seamlessly melding them with her own writing.) “You know, it’s fun to sell big artworks — and it’s profitable. In the end, a good artist is a rich artist,” she bellows as she swaggers across the stage as an unmistakable heavyweight dealer. Minutes later, she morphs again: “Most of the work we collect is about sex or excrement,” she chirps in the perky tone of a prominent West Coast collector. “We like to think of ourselves as connoisseurs of art’s subculture.”

The art world is easy to roast — its most absurd characters are often the most oblivious — and it tends to skewer itself without any outside assistance. But Fraser’s work is not mere polemics or parody. She bares her own insecurities as she examines those of museums, galleries, viewers and patrons. “Official Welcome” may mock the art world’s rituals of florid praise and faux humility, but the performance also reflects Fraser’s lifelong sense of being an outsider — a position she consciously draws upon in her work. “Yeah, it was fun to write,” she said, “but to some extent, this piece was driven by my sense of resentment and envy of my professional peers about whom all these great things were said.” To Fraser, this sort of vulnerability and self-examination is crucial if a work is going to engage viewers. “Art functions through empathy. … [When you] see someone else who’s struggling with something and grappling with something, that creates a space for finding that in yourself,” she said. For her, these performances are not idle exercises but dogged attempts to change audiences and the larger ecosystems they inhabit. And, if the events of the past year are any indication, these provocations have worked — even if most audiences don’t fully realize that the world has caught up to Andrea Fraser.