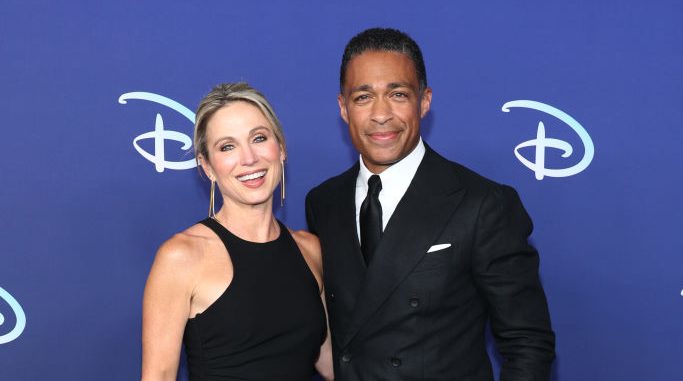 TJ Holmes and Amy Robach have been taken off air on GMA3 amid their alleged romance, it has been claimed.

The two anchors have appeared on Good Morning America for years, but made headlines last week after pictures emerged of them looking very cozy.

The pair, who are both married to other people, initially ignored the drama and continued on with their hosting duties, but the situation has reportedly led to ‘mass confusion’ behind the scenes.

According to reports, bosses have now decided to replace them on new episodes, while they work out a solution off camera.

‘There is massive confusion internally,’ an insider told DailyMail.com. ‘ABC News executive Kim [Godwin] has taken them off the air while they deal with this internally.’

Amy and TJ have always had a close friendship, and their jovial partnership was regularly showcased on screen.

TJ is currently married to Marilee Fiebig, who he shares daughter Sabine with – they tied the knot in 2010 and celebrated their 12-year wedding anniversary in March.

Meanwhile, Amy started dating Andrew Shue in 2008, and they walked down the aisle in 2010.

However, they set tongues wagging when they were pictured looking comfortable together, leading to many questions regarding the nature of their relationship.

In one photo, obtained by DailyMail.com, they could be seen holding hands in the back of a taxi, while others showed them enjoying drinks at a bar in Times Square, and a getaway together.