The “CBS This Morning” co-host appeared on “The Drew Barrymore Show” on Thursday and spoke to the actor about the Duke and Duchess of Sussex speaking their truth.

“I think that interview opened up conversations that many people weren’t prepared to have or didn’t want to have,” King told Barrymore. “But I think, ultimately, it’s about a family that wants to be united and be together and I’m hoping that that will be the case.”

“And have those difficult conversations,” Barrymore said.

The journalist later noted, “There’s nothing healthy when you don’t talk, so let’s all wish that for all involved in that particular story.”

Among the wide-ranging topics covered in the Oprah interview, Meghan spoke of her struggles with suicide. She also claimed that members of the royal family speculated before Archie was born about how dark his skin might be and said that the young royal wouldn’t be given security. Harry revealed that his relationship with his father was strained, so much so that his father reportedly cut off his funding and wouldn’t return his calls.

Prince Charles did not respond to the interview, though Queen Elizabeth acknowledged allegations made in the interview in a statement through Buckingham Palace, released two days after the special.

“The whole family is saddened to learn the full extent of how challenging the last few years have been for Harry and Meghan,” read the statement. “The issues raised, particularly that of race, are concerning. While some recollections may vary, they are taken very seriously and will be addressed by the family privately.”

“Harry, Meghan and Archie will always be much loved family members,” the statement, shared with HuffPost at the time, added. 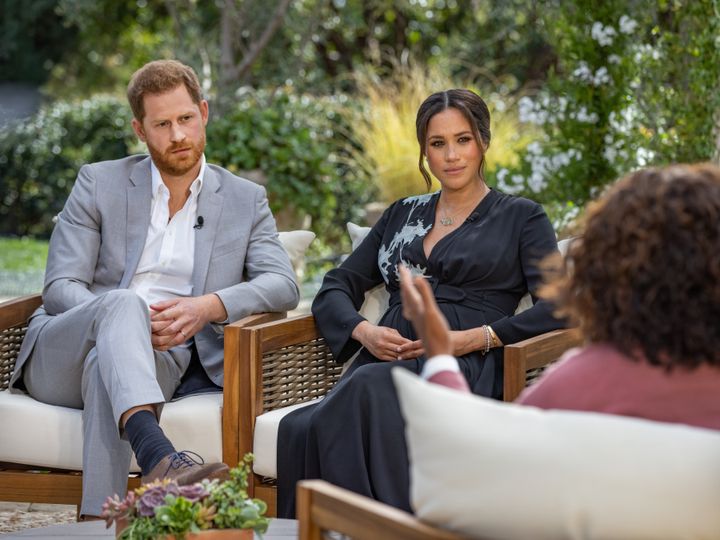 A few days after the interview and Buckingham Palace’s statement, Prince William said at an engagement that the royals were “very much not a racist family” and said that he still had not spoken to his brother.

King later gave an update on royal family relations between Harry, William and Charles the following week on her “CBS This Morning” show.

“The word I was given was that those conversations were not productive,” King said. “But they are glad that they have at least started a conversation.”

“I think what is still upsetting to them is the palace keep saying they want to work it out privately, but yet, they believe these false stories are coming out that are very disparaging against Meghan still,” King said, mentioning that “no one in the royal family has talked to Meghan yet ― or at this particular time.”