Gavin MacLeod, who tasted stardom after years as a journeyman actor when he landed roles on two of the most successful television series of the 1970s and ’80s — as the news writer Murray Slaughter on “The Mary Tyler Moore Show” and Capt. Merrill Stubing on “The Love Boat” — died on Saturday at his home in Palm Desert, Calif. He was 90.

His nephew Mark See confirmed the death. He said that the cause was unknown, but that Mr. MacLeod had recently had health issues.

When Mr. MacLeod was invited to audition for the pilot of “The Mary Tyler Moore Show” in 1970, he was almost 40, a recovering alcoholic and still looking for a breakthrough role after more than a dozen years as a working actor with a string of modest stage, film and television credits — notably on the sitcom “McHale’s Navy” — but little name recognition.

The audition was for the role of Lou Grant, the gruff newsroom boss of Ms. Moore’s character, Mary Richards, a sweet-natured associate news producer at a fictional Minneapolis television station. But Mr. MacLeod asked instead if he could read for the more understated role of Murray, saying he felt more comfortable playing Mary’s co-worker than her superior. (The role of Lou Grant went to Ed Asner.)

“The Mary Tyler Moore Show” ran from 1970 to 1977 and became one of the most acclaimed comedies in television history, winning Emmys and a devoted audience, not least because it centered on a young, single professional woman — still an adventurous premise at the time — and offered quick-witted comedy with generous doses of the real world, addressing serious topics like drug use, homosexuality, women’s rights and premarital sex.

As Murray, the balding, humble head writer and Mary’s office best friend, Mr. MacLeod was given to firing zingers at the show’s other regulars, especially the pompously vain anchorman, Ted Baxter (Ted Knight, a longtime friend of Mr. MacLeod’s). He saw Murray as an Everyman character. 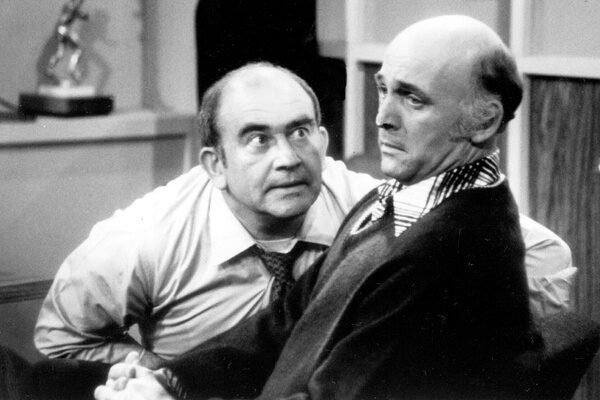 “Murray represented all the brown-baggers — not just in newsrooms, but in all sorts of professions,” he wrote in his autobiography “This Is Your Captain Speaking: My Fantastic Voyage Through Hollywood, Faith and Life” (2013). “People felt they knew me.”

Just weeks after “The Mary Tyler Moore Show” finished filming its final episode, Mr. MacLeod was offered the lead role of Captain Stubing on “The Love Boat.” That show was a hit as well, running from 1977 to 1986.

“The Love Boat,” which revolved around Mr. MacLeod’s affable white-suited captain and a crew of regulars, ventured into new television territory by offering simultaneous plot lines in each episode, all having to do with the humorous, and amorous, adventures of the cruise ship’s passengers, played by guest stars. (Mr. MacLeod later became a pitchman for Princess Cruises.) But unlike “The Mary Tyler Moore Show,” which was acclaimed for its writing and its willingness to defy the sanitized conventions of situation comedy, “The Love Boat,” produced by Aaron Spelling, was vilified by critics as just another example of safe, formulaic TV comedy.

Mr. MacLeod defended the show. “I don’t care if it reflects life or not,” he said. “I love happy endings. Life’s so heavy these days that people want to escape.”

Gavin MacLeod, the older of two children, was born Allan George See on Feb. 28, 1931, in Mount Kisco, N.Y. His family later moved to nearby Pleasantville. His father, George, was an electrician who died of cancer in 1945; his mother, Margaret (Shea) See, had worked for Reader’s Digest.

Allan graduated from Pleasantville High School in 1947 and received a scholarship to Ithaca College, in upstate New York, graduating in 1952 with a degree in drama.

After a stint in the Air Force, he moved to New York City to look for acting jobs, working at first as an usher and an elevator operator at Radio City Music Hall, where he met Joan Rootvik, a Rockette. They married and went on to have four children before divorcing in 1972.

In the early 1950s he adopted his stage name in remembrance of Beatrice MacLeod, his drama teacher at Ithaca. He chose the first name Gavin after a character in an episode of the anthology television series “Climax.”

After finding some stage work, Mr. MacLeod made his television debut as a guest star on “The Walter Winchell Files,” a crime drama. His first credited movie role was a small part as a police lieutenant in “I Want to Live!,” a 1958 drama with Susan Hayward as a woman facing the death penalty. In 1959 he appeared in the Korean War film “Pork Chop Hill” and Blake Edwards’s naval comedy “Operation Petticoat.”

By the 1960s Mr. MacLeod was appearing regularly on television series, with guest-starring roles on “Perry Mason,” “Combat!,” “Death Valley Days,” “Dr. Kildare,” “The Untouchables” and other shows. His part on “McHale’s Navy,” which starred Ernest Borgnine, was his first job as a series regular. His character, Seaman Joseph Haines, one of a crew of misfits aboard a World War II PT boat, was known as Happy. But Mr. MacLeod, feeling underused, was anything but.

“I had, like, two lines a week,” Mr. MacLeod said in a videotaped interview for the Archive of American Television. “I started feeling sorry for myself; I started drinking. I felt that as an actor I was just going down the tubes.”

As he told the story, one night he was driving, while drunk, on Mulholland Drive in the hills above Los Angeles when he impulsively decided to kill himself by driving off the road. But he stopped himself, jamming on the brakes at the last moment. Shaken, he recalled, he made his way to the nearby house of a friend, the actor Robert Blake, who persuaded him to see a psychiatrist.

He quit “McHale’s Navy” in 1964, after two seasons, and began finding more satisfying parts, including a supporting one in the 1966 film “The Sand Pebbles” with Steve McQueen.

After his divorce, Mr. MacLeod married Patti Kendig, a dancer, in 1974. They also divorced, in early 1982, but remarried each other in 1985, by which time they had both become born-again Christians. Mr. MacLeod documented their story, as well as his decades-long struggle with alcoholism, in a 1987 book, “Back on Course: The Remarkable Story of a Divorce That Ended in Remarriage.”

In addition to his wife, Mr. MacLeod is survived by two sons, Keith and David; two daughters, Meaghan MacLeod Launier and Julie MacLeod Ruffino; 10 grandchildren; one great-grandchild; and a brother, Ron See.

Mr. MacLeod became active in religious-oriented entertainment, hosting programs on the Trinity Broadcasting Network and starring in Christian-themed films like “Time Changer” (2002) and “The Secrets of Jonathan Sperry” (2008).

His later television work also included guest-starring roles on “The King of Queens,” “Jag,” “Touched by an Angel” and “Oz,” the HBO prison drama. In 2010, according to his autobiography, Mr. MacLeod quit television in the middle of an audition for an episode of “Cold Case” and returned to what he said was his greatest professional love: theater. He did do some television work after that, but most of his work for the rest of his life was in stage productions in the Los Angeles area.