Home » Entertainment » ‘Follies’ Was My First Broadway Show. 50 Years Later, I Remember It All.

At long last, I was exactly where I had yearned to be for most of my young life. I had arrived in the holy land, which for me was a show palace in New York City, the world capital of my childhood fantasies. My very first Broadway musical, a form of entertainment I regarded as a religion, was about to begin.

Then the lights went down in the cavernous Winter Garden Theater. It got dark, which I had expected. It stayed dark, which I hadn’t. The stage was flooded in shadow, and you had to squint to make out the people on it. Some were tall, spectral beauties from another era in glittering headdresses, and others were as ordinary as my parents, dressed up for a night out. None of them looked happy.

The grand orchestral music seemed to be eroding as I listened, like some magnificent sand castle dissolving in the tide, as sweet notes slid into sourness. This was definitely not “Hello, Dolly!” or “Bye Bye Birdie” or “Funny Girl,” whose sunny, exclamation-pointed melodies I knew by heart from the original cast recordings.

I didn’t know what had hit me. I certainly didn’t know that it would keep hitting me, in sharp and unexpected fragments of recollection, for the next 50 years.

It was the spring of 1971. The show was“Follies,” a title that turned out to refer to both bygone Ziegfeld-style spectacles and the delusions of its main characters. It had a score by a rising composer named Stephen Sondheim and was directed by Harold Prince and Michael Bennett, names that didn’t mean much to me then. The cast included Yvonne De Carlo, Gene Nelson and the divine Alexis Smith, whom I knew from old movies on television. 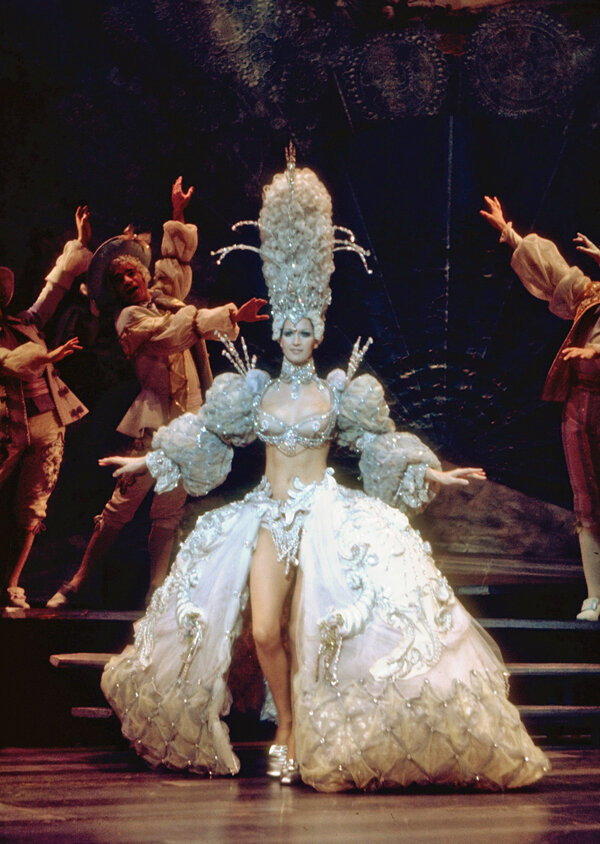 Since the show was still in previews, there had been no reviews to cue my expectations. And word of mouth hadn’t reached Winston-Salem, N.C., where I was a 16-year-old public high school student.

My parents had finally succumbed to my pleas to be taken to Manhattan, where my older sister lived. We were all side-by-side in orchestra seats, and I could feel my mom and dad basking in my excitement.

That excitement was tinged with a thrill of illicit betrayal. Yes, “Follies” was undeniably a big Broadway musical, staged with an opulence that would be unthinkable today. But this tale of two unhappy couples, stalked by the ghosts of their younger selves during a showbiz reunion in the ruins of a once stately theater, was telling me that the optimistic promises of the musical comedies I had been weaned on were lies.

In a cover story that came out a month later — its pictures would adorn my bedroom walls, along with posters of Humphrey Bogart and Vanessa Redgrave, until I left for college — Time magazine enthusiastically (and accurately) described “Follies” as anti-nostalgic, a modern corrective to the cheery, escapist camp of hit revivals like “No, No Nanette.”

Time’s assessment was the opposite of that of the New York Times critics Clive Barnes and Walter Kerr, who didn’t like “Follies” at all. The plot, they wrote, was hackneyed and formulaic. As for the songs, with their homages to styles of showbiz past, Barnes called them a “non-hit parade of pastiche.”

I couldn’t disagree about James Goldman’s book, which felt like a rehash of the best sellers about middle-aged disenchantment I borrowed from my parents. (I already suspected that my future was in criticism.) But the songs stuck with me, along with piercing images of aging performers clinging to a waning spotlight. And I had a vague sense that I would be destined to forever recall this odd and majestic show “like a movie in my head that plays and plays,” to borrow from its script.

In some ways, “Follies” was a perfect match to my adolescent self. My parents had always encouraged me to understand that old people hadn’t always been old, to look for the layers of what they had been. (I was fascinated by the culture of my grandparents’ generation, which meant that references to Brenda Frazier and “Abie’s Irish Rose” didn’t go over my head.)

And part of what I found so affecting about musicals were the differences between their exalted forms and the often ordinary lives they portrayed. (I would restage classic musicals in my head with my friends and family in the leading roles; it made me cry happily.)

What I didn’t get then — and couldn’t have as a teenager — was how the music was the very sound of memory. It was the cleverness of Sondheim’s lyrics that attracted me in my youth. I loved quoting their sophisticated rhymes.

But the older I got, and the more I listened, the more I appreciated the complexity of the pastiche songs, like “The Story of Lucy and Jessie,” “Broadway Baby” and the torchy “Losing My Mind” (which I confess to having sung, drunk, in a piano bar). These aren’t just facile imitations from another era; they’re inflected with the echoes and distortions of all the years that have passed since. As a memory musical, I came to realize, “Follies” approaches Proustian dimensions.

When I hear anything from “Follies” now — or see a new production (I’ve written about seven incarnations for The New York Times) — it’s with the memory of watching that first cast of characters remembering. Every time what I’m listening to sounds deeper and richer, and sadder and funnier. And I recall, with a tightening of my chest, that 16-year-old boy staring at the stage in rapture and bewilderment.