POMONA, Calif. — Deep within the verdant grounds of the Mt. San Antonio Gardens retirement community, the artist Elizabeth Turk was immersed in her latest project, an ambitious work of art that she could easily imagine but not yet see.

“What do you tell yourself when you face adversity?” she asked the residents, drawing inspiration for a project that would create hope during the Covid-19 pandemic. With the 31-acre community as her canvas and its 500 residents and staff members as her medium, Ms. Turk envisioned “a wild garden on steroids” for a moving-art installation titled “Project: Look Up.”

“Plunging into this project has just been an act of grace because it’s kept me optimistic,” says Ms. Turk, 59, a 2010 MacArthur Foundation “genius grant” fellow.

“Look Up” is modeled after her “Shoreline Project,” a 2018 commission by the Laguna Art Museum that brought 1,000 volunteers to Laguna Beach at twilight, equipped with specially designed, illuminated umbrellas. Participants interacted as they meandered along the shore while hundreds viewed the spectacle from cliffs overlooking the area.

Inspired by the resilience and optimism displayed by residents of the retirement community, Ms. Turk wanted to create an upbeat “Shoreline”-like experience that would shatter myths of helpless senior citizens. This time, though, the privately funded installation would be closed to the public because of safety concerns. Ms. Turk plans to create a multimedia artwork featuring kaleidoscopic images from drone footage of participants as they move about in several locations across the expansive grounds.

When the pandemic hit, Ms. Turk, who resides in New York City and Newport Beach, Calif., was working on plans to re-create “Shoreline” in Laos. That project was quickly shelved. 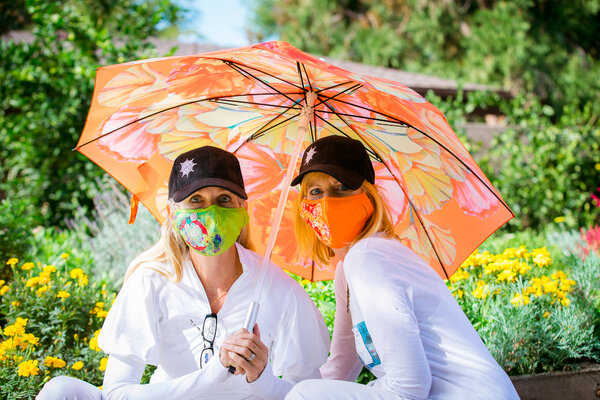 Then came a call from Mt. San Antonio Gardens, 30 miles east of Los Angeles, where residents include professors from the neighboring Claremont Colleges. In February, Ms. Turk, a Scripps College alumna, had given a talk there about her work, including her signature marble sculptures, “Tipping Point: Echoes of Extinction” (on view at Hirschl & Adler through Dec. 11) and “Shoreline.”

Officials there approached her in July about designing umbrellas for their gift shop. But the discussion quickly turned to the residents, who range in age from 64 to 104

“It just hit my heart,” the artist recalled. “I thought what better community to engage with to remind us of joy and resilience — vulnerable people leading us back to joy and togetherness.”

The Mt. San Antonio Gardens’ chief executive, Maureen Beith, was initially hesitant about letting residents participate because of Covid-19, she said. “But because I knew that something positive was sorely needed, I felt it was important for us to go out on a limb a little bit.”

And so on a crisp November day last week, masked participants gathered, each carrying a colorful umbrella featuring the artist’s drawings of plants that symbolize success in the face of adversity. The umbrella width helped encourage social distancing.

To make “Look Up” more inclusive, the artist arranged to photograph residents who had been unable to participate. Those with mobility issues received a mechanism that allowed umbrellas to be attached to wheelchairs or walkers.

In the weeks leading up to the event, residents prepared handwritten responses to Ms. Turk’s question about adversity. Sayings such as “Be brave,” “I am a warrior” and “Breathe,” will be incorporated into Ms. Turk’s final multimedia artwork.

“Look Up” kicked off at the pool — in and around the water — as a saxophonist played soothing jazz and drones buzzed overhead, filming the action. Later, dozens of retirees snaked through the community garden to Tchaikovsky’s “March of the Tin Soldiers.” On the putting green, several couples danced to “Unchained Melody,” encircled by 100 residents swaying their umbrellas to create wide shadows on the grass.

For the finale, all participants assembled in a central parking lot, moving in a final interaction before dispersing to Louis Armstrong’s “What a Wonderful World.” Many stayed behind, umbrellas still open, not wanting the day to end.

Michael Lamkin, a resident and retired music professor and former vice president of Scripps College, called the event “a moment of joy. And a moment of real celebration.”

“There’s so much division going on in the world,” he said, “Something like this, where people could be together, people could be united in one project, and people could feel really good about being human for a few moments, that’s uplifting.”