Eddie Money, whose string of rock hits in the late 1970s and ’80s included “Baby Hold On” and “Two Tickets to Paradise,” died on Friday in Los Angeles. He was 70.

His family announced the death in a statement. Mr. Money, whose birth name was Edward Mahoney, announced last month that he had stage 4 esophageal cancer.

He and his family have been the focus of a reality television show on AXS TV, “Real Money.” The episode in which he learns he has cancer was broadcast the night before he died.

Mr. Money, the son of a police officer, was headed for that career himself when he dropped out of the New York Police Academy to move to San Francisco in pursuit of rock stardom. He found it in 1978, when “Baby Hold On,” from his debut album, “Eddie Money,” reached No. 11 on the Billboard Hot 100 chart.

Then came “Two Tickets to Paradise” and “Maybe I’m a Fool,” among other hits.

Mr. Money struggled with drugs in the early 1980s, but he staged several comebacks; his hits later that decade included “Take Me Home Tonight” and “Walk on Water.”

Edward Joseph Mahoney was born on March 21, 1949, in Brooklyn to Daniel and Dorothy Mahoney. His mother was a homemaker.

He graduated from Island Trees High School in Levittown, on Long Island, in 1967. He began training to become a police officer at 18, but by night he was rocking with a band called the Grapes of Wrath.

“Those were the days when students were fighting with cops all the time,” he said, “and the band eventually fired me because they didn’t want a ‘pig’ in the group.”

He abandoned his law-enforcement aspirations before he was 20 and headed to the West Coast. Eventually the promoter Bill Graham took him under his wing, and soon he had a contract with Columbia Records and was opening for top acts, including the Rolling Stones.

“Having been a N.Y.C. streetsinger since age 11, Money is an unfazed dervish onstage,” Steve Morse wrote in The Boston Globe in 1978, when Mr. Money opened for Santana at the Music Hall in Boston. “His street-gaunt face and wiry body (with hair falling in his face à la Meatloaf) move magnetically, and his voice has a throaty snarl like Joe Cocker.” 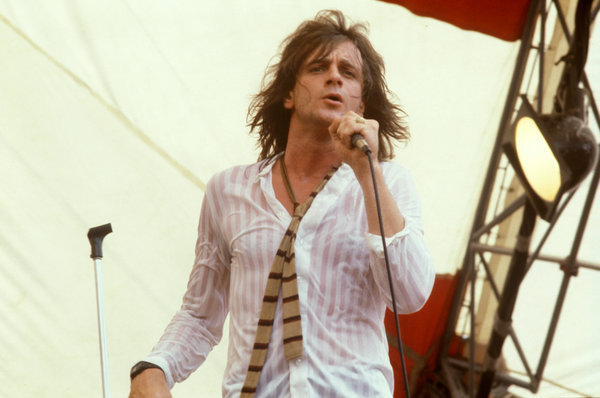 “Money’s determination is only matched by the scope of his talent,” he wrote in 1979. “He is not going to be stopped.”

But a year or so later he was in fact almost stopped.

“One night after a show, I got loaded on vodka,” he told The Lubbock Avalanche-Journal of Texas in 2009. “Then I took a really bad barbiturate by mistake, when I thought I was actually doing cocaine.”

He fell into a coma, and when he came out of it he found that he had damaged his sciatic nerve; he couldn’t walk for months. His 1982 album, “No Control,” constituted what he considered his first comeback.

“Well, they took me to the hospital, and I swore I wouldn’t go,” the title song from that album begins. “My blood was running much too high; my heart was much too slow.”

While other 1980s acts were going for flamboyance, Mr. Money maintained the image of a working-class rocker.

“I never went out with spandex pants or the big hair,” he told The Repository of Canton, Ohio, in 2014. He added: “I was just a regular singer who went out and worked. I’m glad I did. I would look ridiculous in those clothes.”

He also made television appearances. He played himself in a 2002 episode of “The King of Queens,” and, just last year, on “The Kominsky Method,” he portrayed an Eddie Money impersonator who was actually the real Eddie Money.

In 2009, a stage musical based on his life, “Two Tickets to Paradise,” was performed at the Dix Hills Performing Arts Center on Long Island, with Mr. Money himself serving as narrator. In an interview with The New York Times promoting that production, he noted that he was still Edward Mahoney legally and in his private life.

“Eddie Money is just a figment of your imagination,” he said. “We let him out for an hour and a half at a time.”

AXS TV said it would broadcast the remaining five episodes of “Real Money” in the show’s usual Thursday slot. For the reality-TV incarnation of his career, Mr. Money had become more genial jokester than rocker, one with a self-deprecating streak.

“I look at the show and I’m very self-conscious about the way I look,” he told Rolling Stone. “My wife says to me, ‘You look heavy on TV.’ I said, ‘Honey, the camera adds 10 pounds.’ She said to me, ‘How many cameras did they use?’”

Neil Genzlinger is a writer for the Obituaries Desk. Previously he was a television, film and theater critic. @genznyt • Facebook