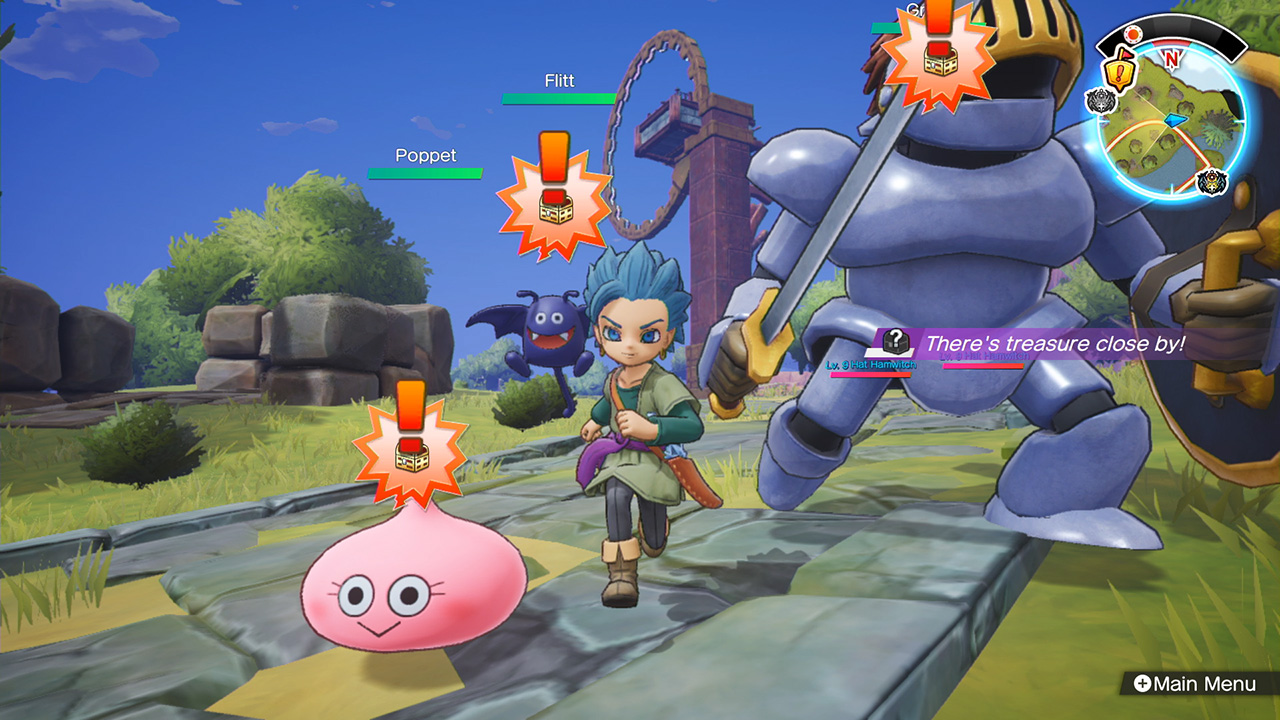 In the tradition of Dragon Quest Builders, Square Enix presents a new spin-off to its long-running RPG series, with a very singular focus.

No matter how good an open world game is, at the end of day they all rely on filler content. That’s not a complaint, just a recognition that not every side quest can be unique and unless you want to spend two decades making a game you’ll always end up reusing some mission types, just to make sure there’s enough to do. Puzzle types get repeated in slightly different scenarios and multiple excuses are found for picking up an implausibly wide range of collectables.

Certain concepts fall in and out of fashion, but one that’s recently become popular is the idea of being given a photo or drawing of a location and then trying to find out where it is and retrieving its associated treasure. Zelda: Breath Of The Wild, Elden Ring, and God Of War Ragnarök all feature the same basic idea, but unlike something like crafting it’s not a mechanic you could imagine basing a whole game on. Enter stage left: Dragon Quest Treasures.

To be fair, matching up photos with in-game locations is far from the only activity in Square Enix’s latest Dragon Quest spin-off, but the game often feels like an open world adventure where are the more mundane activities have been taken out and made into their own game. We realise that doesn’t sound very enticing, but Dragon Quest Treasures is actually a surprisingly charming, low stakes adventure that’s the perfect way to close out the year.

Although you might imagine this has something in common with the excellent Dragon Quest Builders games – Square Enix’s attempt to meld traditional adventuring with Minecraft style construction – there’s actually little similarity beyond the visuals and the fact that they’re both open world games. For a start, Treasures is set squarely within the same world as Dragon Quest 11, since you play as thief Erik and his sister Mia.

They look younger than they did in the original game, but series continuity is not something the game is very concerned about, as you quickly end up befriending a magical flying pig and cat, before being whisked off to a mysterious island made from the ossified bodies of two giant dragons. The island’s magical origins is the explanation given for why it’s littered with buried treasure chests, which in turn has attracted a variety of pirate gangs, of varying levels of moral integrity.

Erik and Mia fall in with one of the nice ones but while there is an overarching story, involving searching for special dragon stones, after a rather a somewhat laboured tutorial section you’re free to go about your business largely as you want.

The process of discovering treasure is very straightforward, as you meet up with various monsters – most pulled from Dragon Quest’s long and storied history – who you can bribe into your service with money and resources. Once part of your party you’ll then have the ability to read their mind with a magic dagger (we didn’t quite get that bit) that lets you see the in-game location clue, à la Breath Of The Wild and co.

Other monsters have to be fought but rather than the series’ traditional turn-based battles you attack them in real-time. The combat is very simple though and doesn’t involve much more than just button mashing your attacks, occasionally rolling out of the way, and letting your monster party members attack on their own.

Monster allies usually fit into one of a small group of categories, each of which has their own special ability or ‘forte’, such as enabling higher jumps, gliding, or helping out with stealth. So it’s important to ensure your party has as wide a range as possible, rather than solely picking them based on their fighting prowess.

Even so, once suitably levelled up almost every monster is better at fighting than you are and so it’s more useful for you to take a support role, using a catapult to injure enemies at a distance, stun them, heal allies, and make them more susceptible to joining your party.

Technically speaking, Dragon Quest Treasures is a simple game, with a lot of very noticeable object pop-in, but the well designed game world and colourful designs do a lot to endear it to you, especially if you’re a fan of Akira Toriyama’s art style. The music, and the way text is displayed on screen, pays suitable homage to the wider franchise, without going overboard on fan service.

Instead, the main problem is the amount of back-and-forth at your base camp. You can only carry a certain amount of treasure with you at once, some of which has to be assessed before you know what it is, and so it’s very easy to max out your inventory within 10 or 20 minutes, without actually having found anything of note.

There really should have been a way to turn one of the monsters into a courier, perhaps leaving you vulnerable until they get back, but instead you have to constantly keep going back to drop off your stuff, or otherwise remain laser-focused on rarer tasks and treasures. This is unfortunate, as it adds an unnecessary level of repetition and frustration to what is otherwise a fun and mellow adventure.

It’s not as unique or ambitious as Dragon Quest Builders 2, but Dragon Quest Treasures is still an enjoyably low tempo experience that’s perfect for newcomers to the franchise and action role-players in general. By coincidence, it also happens to be the perfect thing to play on a chilly winter’s morning, while still huddled under your duvet. We doubt that was part of the marketing plan but that’s how things have worked and why this fully lives up to the promise of hidden treasure.

In Short: Charming and relaxing is not how you’d describe the average action role-player but this wholesome Dragon Quest spin-off is an enjoyably undemanding, family friendly adventure.

Pros: Charming visuals and engaging, low intensity gameplay loop, with a fun open world to explore and combat that is simplistic but still relatively tactical.

Cons: The core gameplay is fun but it’s uncomplicated almost to a fault. Having to constantly go back to your base, just to drop off treasure, is a needless waste of time.