Donald Trump was the early bird in the 2024 presidential race and after some initial stumbling, he’s ready to ramp up his strategy. Besides reportedly changing up his Truth Social situation, the former president is ready to rally — yet it seems some of his supporters are not.

He’s heading to South Carolina for his first campaign event next week, but according to The Washington Post, Donald Trump is struggling to drum up support. His aides have made “pleading phone calls” to get folks to not only attend the rally, but endorse the former president. However, he’s running up against other South Carolina Republicans like former governor Nikki Haley and Sen. Tim Scott, who are possibly mounting campaigns themselves. The people who were once his supporters are now going to be his opponents.

“Nikki Haley is probably our first South Carolinian since we voted for George Washington that has really had a chance of being president of the United States,” former South Carolina GOP chair Katon Dawson told The Washington Post. “And I think the Trump folks are going to run into that history.” Evangelical leader Dave Wilson believes “there is more than a little bit of softening” for support when it comes to former president, especially since he only made it four years in office — the religious groups want “eight more years [to] create momentum.” And of course, there are many just waiting for Florida Gov. Ron DeSantis to throw his hat in the ring.

Donald Trump is expected to have Sen. Lindsey O. Graham and South Carolina Gov. Henry McMaster by his side, but there is an ominous warning from an anonymous state lawmaker. “The Trump campaign is trying to consolidate support. But I don’t think it is going to be as quick as they think,” they concluded. “Right now my constituency is as excited about Ron DeSantis as Donald Trump, if not more.”

Before you go, click here to see every time Ivanka Trump has tried to distance herself from the Trump family: 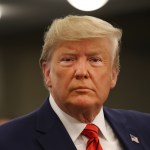