Donald Trump isn’t the typical president, who spends his post-White House days writing a book and planning the details of his presidential library. He’s too busy plotting his next move and dropping in unexpectedly to every event happening at his golf clubs. After being banned from social media, Trump’s uninvited guest cameos are a great way for him to stay in touch with the MAGA crowd. 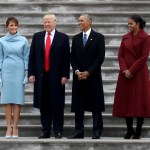 In the Trump bubble, things are going great, because his voting base has stayed strongly supportive, particularly in his new home state of Florida. If you ask former colleagues, like his frenemy and ex-personal lawyer Michael Cohen, things are perceived differently outside the world of Trump. “Donald Trump needs the adulation of the crowd the way you or I need oxygen to breathe,” he told Bloomberg Businessweek.

The news of the New York State and Manhattan criminal investigations into the Trump corporation finances hasn’t put a damper on the former president’s spontaneous visits. He recently dropped into a memorial service, where he graciously said a few words and then greeted the crowd, who was there honoring the deceased.

Trump certainly hasn’t been bad for business in the Palm Beach, Florida area, where residents live there seasonally and often flee during the hot summer months. “A lot of locals tell me the season has extended quite a bit because of Trump bringing a spotlight to Palm Beach,” former White House spokesman Hogan Gidley told Bloomberg Businessweek. “People are still here, networking and extending their projects. And you never take your line out of the water while the fish are still biting.”

For anyone hoping for a Trump sighting this summer, they will have to head north to his Trump National Golf Club in Bedminster, New Jersey. Mar-a-Lago is closed until fall, but we know Florida eagerly awaits his return — and his party-crashing ways.

Before you go, click here to see celebrities who have run for office.