After nearly 20 years at the helm, the director of the San Francisco Museum of Modern Art, Neal Benezra, is stepping down, the museum announced on Tuesday.

Benezra, 67, said he was leaving because “19 years is a long time, and the time feels right to begin our succession planning.”

“What we are announcing is the beginning of a transition,” he added, “not a departure.”

But his decision comes at a challenging moment in the 86-year history of the museum, which Benezra helped expand into one of the largest contemporary art institutions in the country.

Over the last year, SFMOMA has had to reckon with what employees have called structural inequities around race. Its senior, and longest-serving curator, Gary Garrels, resigned over comments he had made in a meeting that some considered racist. And Benezra had to apologize to employees after limiting comments on a former staffer’s Instagram feed.

In emailed answers to questions, Benezra said that the controversies “had absolutely nothing to do with my decision,” adding that the museum’s conversations about succession began in 2019.

“Like many other cultural institutions, we have had to confront issues of racial injustice at SFMOMA,” Benezra said, “and we have learned a great deal from our staff, artists and our larger community.”

He added that the museum was engaged in an “extensive” diversity planning initiative and would release a diversity action plan this spring.

Benezra’s decision to depart comes at a time when the museum has been closed for almost a full year because of the pandemic. (It reopened for two months at the beginning of October before closing again.) “We are hoping against hope to be able to reopen in the next few weeks,” Benezra said. “It has been and continues to be a tremendous challenge, but SFMOMA is certainly not alone in having to move through this as well as we can.”

With vaccines becoming more available and the Bay Area’s Covid-19 cases dropping, Benezra added, “it felt like a more opportune time to share the succession plan with the staff and our communities.”

Despite the recent setbacks, Benezra has presided over a long run of successes at the museum, helping build a collection of more than 50,000 objects in painting, sculpture, architecture, design, photography, contemporary art and media; overseeing a staff of nearly 400; and shepherding the museum’s 2016 building expansion, designed by Snøhetta. 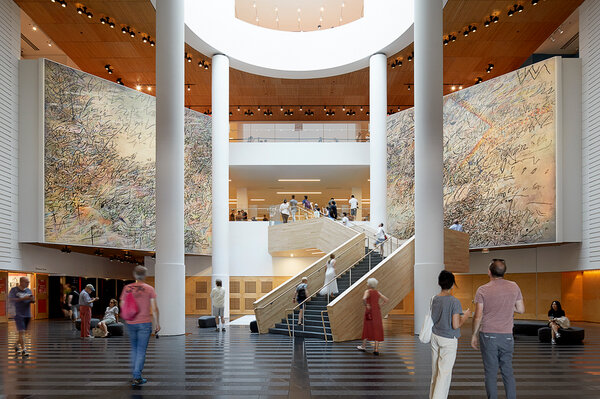 He also increased the museum’s endowment and attendance, commissioned site-specific works, including Julie Mehretu’s monumental work in the atrium, and negotiated the Fisher family’s donation of more than 1,000 works from their important private collection. The Fisher Collection, which has pride of place on several galleries, includes artists such as Louise Bourgeois, Ellsworth Kelly, Agnes Martin and Cy Twombly.

The donation was criticized in some quarters because it came with conditions about how and where the work could be shown (stipulating, for example, a 75 percent to 25 percent ratio of Fisher to non-Fisher work for the galleries).

Last June, Taylor Brandon, a former communications associate at SFMOMA, criticized the museum’s response to protests over the death of George Floyd. Benezra later apologized to Brandon and to “current and past Black employees who may also have experienced pain or anger in this decision.”

In July, during an all-staff Zoom call, Garrels was asked about a @changethemuseum Instagram post that quoted him saying, “Don’t worry, we will definitely still continue to collect white artists.” Garrels said his comments were “a little bit skewed” and that he was not a believer in any kind of discrimination, but five days later he resigned.

Even before the Black Lives Matter movement, the museum had become increasingly focused on diversifying its collections — in 2019 selling Mark Rothko’s “Untitled” (1960), to establish the Peggy Guggenheim Fund to purchase works by people of color, women, L.G.B.T.Q. artists and others who are underrepresented.

Although the art world has found it difficult to develop a broad collector base in Silicon Valley — and Larry Gagosian last month closed his San Francisco gallery, a discouraging sign — Benezra said the Bay Area has “a robust community of museums, art schools, galleries and creative spaces that I know will flourish again when the pandemic is over.”

A curator himself who has organized exhibitions — including the recent “JR: The Chronicles of San Francisco” (2019-20) — Benezra has also written about artists such as Jasper Johns, Clyfford Still and Franz West.

Benezra will assist with the search for his successor, the museum said, continuing his stewardship until a new director has been hired. Asked whether part of his decision to leave now was to make room for a woman or person of color, Benezra said the next director should be “empathic, passionate, inclusive and brave.”

“It is fundamentally important that our next director be a person who is passionate about modern and particularly contemporary art,” he added. “In addition to management, entrepreneurial, fund-raising skills, and an ongoing commitment to our D.E.I. initiative, I think it is critically important to have a director who is tech savvy.”

Benezra will also be overseeing a retrospective of the Korean artist Nam June Paik and moving Diego Rivera’s mural, “The Marriage of the Artistic Expression of the North and of the South on the Continent” (1940), from City College of San Francisco to the museum.

Next fall, SFMOMA will present the highly anticipated exhibition of Joan Mitchell, which starts a planned year of programming that highlights women artists.

After that, he added, “I am very much looking forward to taking the sabbatical I was hoping to have last year.”